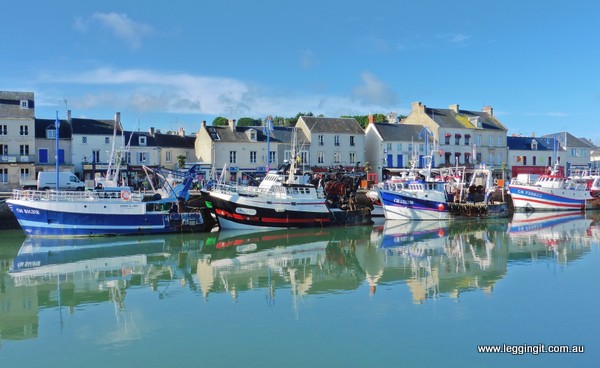 Today we say goodbye to Caen as we head to the other end of Normandy to Mont St Michel. As we headed out of Caen the clouds were pretty low but according to our weather website the weather would be wet early but clear to a bright sunny day.

The roads were quite wet from the early showers and someone must’ve left their cap off their diesel tank as there was diesel down the road for miles. We headed back through Douvres-la-Délivrande, just because it’s a beautiful little town and we wanted one last glimpse.

All along the beaches there’s monuments to all the different countrie’s armys, Regiments and Army corps who were involved in the battle for Normandy. Throughout Normandy American, British, Canadian flags fly alongside French flags as a sign of respect. There are so many museums, and memorials in every town it would take a year to visit them all.

We hugged the coast most of the way and passed through Arromanches again, which for some reason has really captured our hearts. The next time we visit Normandy we’ll book a room and stay I think. The sun was beaming by the time we left Arromanches and we headed along the same road we rode yesterday taking us past our lunch spot. Reminder to self Always, Always ask what is the Plat de Jour before ordering.lol

The road took us through some beautiful little towns until we arrived at Bessin sur Mer. It’s a beautiful seaside town, between two cliffs with a marina running through the middle. Cafe’s and restaurants line the edge of the marina so we stopped and wandered along enjoying the sunshine. Along the edge of the sea wall thousands of scallop shells litter the sea and shore. Some washed up to form intricate patterns. It seems the locals dump the empty shells once the scallop shells have been processed. We took a look inside the local Fresh Fish market and watched two ladies as they shucked the massive scallops. With knives flying they prised the scallops open cut the muscle and roe next thing they were onto the next scallop. Awesome.

There were lots of fish we’d never seen before from different varieties of plaice, some the size of dinner plates., to types of clams.

We stopped off at Omaha Beach, another Normandy landing beach and then visited the American War Cemetery at Colleville. The cemetery is set on the cliff top overlooking Omaha beach. There’s a visitor centre, and a wonderful pillared monument with outstanding praises for the American soldiers who gave their all. The thousands of white crosses bear witness to this, many with names, some known only to god while others have no known resting place. A short walk away towards the beach is the Omaha monument with a trail, leading to the beach. Looking down at the beach you can only imagine what the troops thought as they spied the cliffs overlooking Omaha Beach 70 years ago.

We passed Utah Beach, the other American landing beach before we decided to put some miles behind us and headed cross country eventually stopping for lunch in the little town of Lessay, only to find everything closes at 130 pm. At the cafe we tried our luck and using our best schoolyard French we ordered two coffees and two sandwiches. OK one thing we haven’t mentioned is that cafe’s in France aren’t like cafe’s anywhere else. Sometimes like this place they are the traditional ones where they sell coffee, wine, alcohol, betting tickets and there’s not a cake or pastry to be seen. A real mans cafe. ” the sun’s over the yardarm…..somewhere in the world I think I’ll have a glass of wine and put some bets on” or something to that effect.lol

After a quick belt of coffee, no we weren’t gonna get sandwiches, we headed across to the cake shop. They had an amazing array of cakes and sweet things we ordered a pepito (which looked like a pastry filled with cheese and marmite, it turned out to be filled with custard and chocolate) Ron was happy with that. We also ordered a Paris-Brest and some sort of bread chorizo and cheese combination which turned out to be a winner after all the sweet things to eat something savoury. While we were eating our cakes enjoying the sun a local befriended us and without a word of English happily started talking to us. He followed us to the bike and noting that it was a Deauville was most impressed with the French connection. He climbed into his old Citroen and proudly showed off the air lift suspension in the old classic before driving away.

The second part of our run down to our accommodation wasn’t as good the countryside was a bit scrubbier, the roads were heaps busier, roadworks, heaps of speed cameras, lots of built up areas, and motorways. We got small glimpses of Mont St Michel as we rode along and suddenly there it was in all it’s glory, it is easy to see why it is so popular. We were so glad to finally arrive at our guesthouse, we were welcomed by a lovely old man who showed us our room, explained where to get breakfast the next day and wished us ‘Bon Nuit’. After a short break we decided to check out Beauvoir to find a restaurant.

Well we rode up the street and rode down the street. The only traffic on the road was us. The only lights on in town was the local hotel and our front headlight, so the choice of restaurants was quite easy. The hotel was actually pretty good. We had a three course meal for 12 euros each and it had great service.