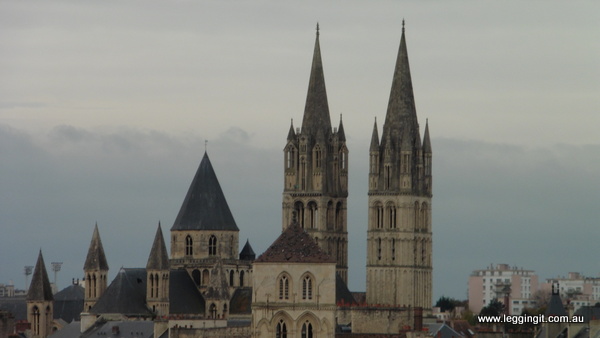 Being our last day in this part of Normandy and after a really heavy day at the Caen Memorial yesterday we decided to take it easier today. A day with no real plans except to check out Arromanches 360 Cinéma Circulaire.

My Iphone was dead so our first stop was an apple shop which Ron had googled. It was a beautiful ride out along an avenue of trees surrounded by fields and as we came over the rise from Caen the first thing we saw was the two spires of the Basilique Notre-Dame de la Délivrande in Douvres-la-Délivrande in the distance.

As we slowly rode through the town looking for the Apple shop, suddenly it twigged and I asked “was this an Apple store?” Ron replied “I think so” but at the address was a shop named “Le Petit Pomme” (the little apple) a kids clothing store, oops another lost in translation moment. Lol

It was market day in the town so we parked the bike and took a look at the fresh fruit, vegetables and fish being sold on the market square. The Basilique Notre-Dame de la Délivrande looked pretty old so we took a peek inside. We were quite surprised to find it had a Black Madonna statue. The faces of the Madonna and child are black and according to legend it may either stem from Cistercian monks from the middle ages and a virgin Mary cult or a goddess-mother cult introduced by Roman Legionnaires from North Africa.

Whatever the origins the Basilica was a major site of pilgrimage over the years, as important as Mount St Michel. The Black Madonna has been credited with healing incurable illness, also during an outbreak of cholera which had claimed 83 lives the Madonna was paraded in the streets and the epidemic ceased. The 44 people who recovered from cholera never relapsed and the town was saved. Whether the miracles are believable or not the faithful place a written prayer request or thanks at the feet of the statue. Every Sunday the whole parish community joins in the prayers. The walls of the Basilica are lined with tiles (ex-votos) from people who’ve prayed and had their prayers answered. The black Madonna is also said to have prevented the destruction of the Basilica during the fierce bombardments during the Normandy Landings. In fact only two windows were broken.

After our visit we headed on to Arromanches 360 Cinéma Circulaire. The Circular Cinema is situated on top of a cliff overlooking Arromanches and Port Winston, Gold Beach. 360 is just that a 360 degree cinema screen. The cinema is part of the Caen – Normandie Memorial so there’s a ticket which includes both sites. The cinema shows a 30 minute film “Les 100 Jours De Normandie” (Normandy’s 100 Days) which shows the battle, the landing and eventually the resurrection to today. The footage was pretty harrowing at times with aerial bombings, people being killed, dead bodies on the streets, soldiers wading ashore through bodies floating on the tide. The war footage is all in black and white, maybe signifying the dark days which the world and the country were in. At the end of the film the colour returns as the present day beaches and countryside are shown. It was a really emotional film which had me reaching for the tissues. After the film the automatic doors opened through to the gift shop and we were done.

On our way back to the bike we met up with an English guy who had owned a Deauville previously and had a nice chat about bikes, touring, mopeds, and France. He’s touring in a van at the moment and we wish him well on his journey.

Arriving back in Caen we decided to check out the in the centre of city. The castle was built in 1060 and was the seat of William the Duke of Normandy and subsequent King of England. It’s a massive structure which is similar to the many Norman castles of England. The Castle is situated on the highest ground, overlooks the city below and definitely built as a sign of power. These days it’s mostly a ruin which houses the Museum of Normandy, an Art gallery and a visitor centre in the old church. We stopped at the restaurant which adjoins the art gallery and noticed the Michelin sticker on the door. Despite only ordering coffee the service was quite pleasant and the coffee not expensive.

A cheap meal from the supermarket next to the hotel capped off our last day in this part of Normandy.

Tomorrow we head to the south of Normandy.

Disclaimer: We did accept free entry to the Arromanches 360 Cinéma Circulaire there was no agreement as to the content of our review.