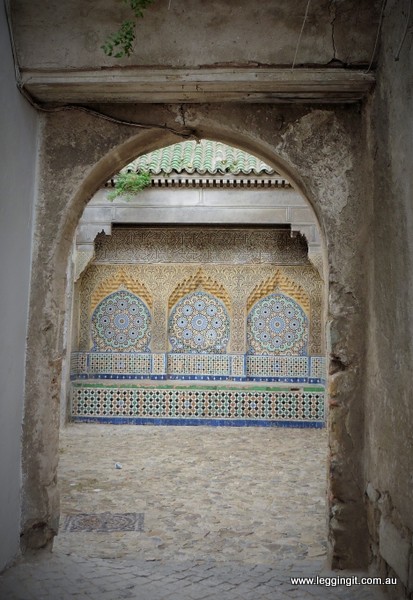 This morning we needed to find Dar Rif in Tangier, the hotel we had booked as we would have to pay for the three nights accommodation as a cancelation. After an Ibis French breakfast of pastries, eggs, meats, cheeses, coffee and rolls we packed the bike and headed off. We thought after getting maps of the net we were prepared but pretty soon the lack of street signs had us stumped.

Once again we rode up and down the street and around the same places. It is so frustrating, I throw my hands in the air and say ‘that’s it let’s leave Tangier and go somewhere we can find our way around’.

Ron of course was his usual “don’t be in such a hurry to get somewhere, slow down.. it’s a beautiful day enjoy the journey”. He took the phone and after careful consideration said I think I can find it.
After filling the bike (fuel is so cheap about $5 per tank less than Spain) we were soon roaring down Ave Mohamed VI. The hotel was near Hotel Continental which overlooked the port high on the cliff but to get there was via little alleys (they looked bigger on google maps)
A local guy offered to show us the way for one Euro so we accepted. He ran ahead of us shooing people out of the way as we rode down one alley and up another twisting and turning through the ancient streets.
Eventually we arrived and of course he wanted payment, flatly refusing the 40 Dinars (4 Euros) that Ron offered settling instead for 140 (grr $20 Michele was not happy). He introduced us to his mate who of course ran the local car park, as the hotel had no parking he took us to the Hotel Continental car park which was another 150 Dinars, our cheap hotel was not looking cheap. 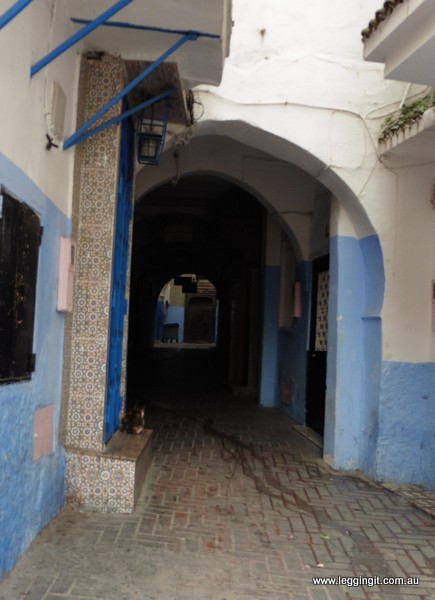 Dar Rif was down a tiny dead end alley and was a small guesthouse with two rooms on each of the two floors with stairs to a rooftop lounge area. As the day was sunny we ordered some mint tea and relaxed up on the roof for a while. The view was stunning over the Tangiers bay, city and the old medina. 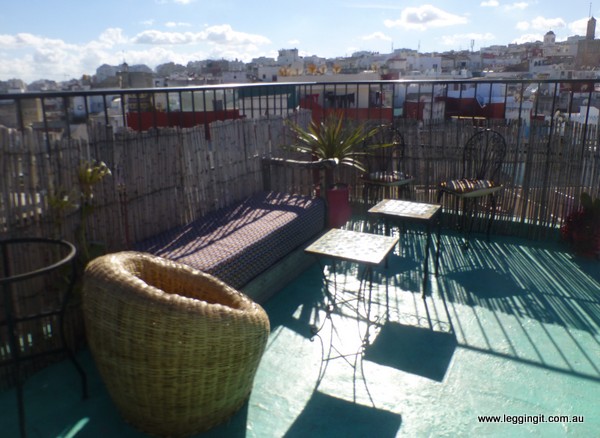 We decided to head out for lunch, Dar Rif has a Restaurant nearby so we thought we would check it out, when we left the guesthouse our new ‘carparking’ friend met us and try our best we couldn’t shake him. All the locals seeing us trying to give him the slip were giving him glowing recommendations about what a honest person he was blah blah blah. He asked us to follow him to a great local restaurant in the middle of the medina which despite the great food was full of tourists and of course expensive.

After lunch it was time for a showdown and we told our two new friends ( as by then our original guide had turned up as well) that it was time to part company. Rid of our babysitters we were free to explore the rest of the markets in the medina and purchase a few items which may be of use, a map and a SIM card (the service at the phone shop was outstanding).

Late in the afternoon we walked down to the beach enjoying a drink watching crowds of young people practicing somersaults, a man with a pair of camels and young men on flighty Arab horses racing across the sand. It’s hard to imagine we’re in the middle of a city. 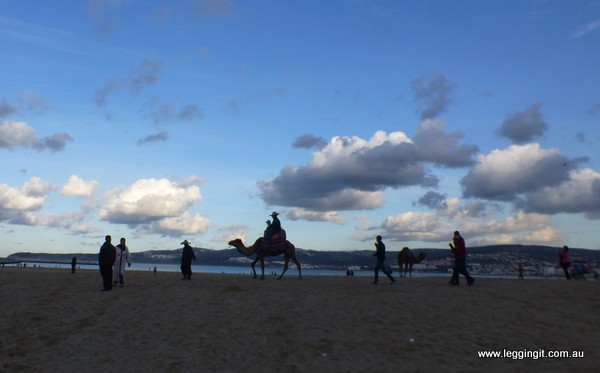 As the storm clouds rolled in late in the day and the sun started going down we headed back to the guesthouse. Tomorrow hopefully we’ll check out the Kazbah and then have Ron singing “Rock the Casbah” for a few hours.

Hopefully a few lessons about dealing with locals have been learnt as we can’t afford to keep paying out like today.

2 thoughts on “Finding The Elusive Dar Rif In Tangier”