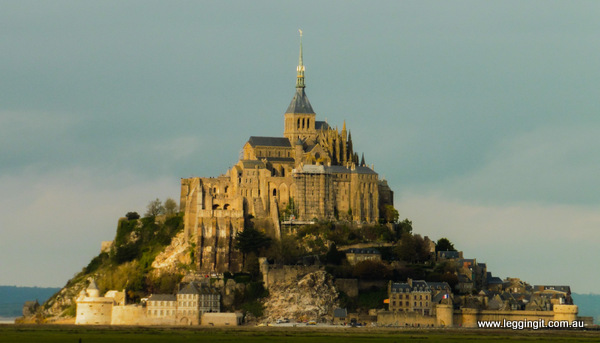 Today we went to Mont St Michel. When we arrived at the carpark we had trouble accessing the gate to enter and were unsure whether it was a timing problem or not. After a while we found an alternative rid ein after a car that seemed to have no issues getting in.

To access the island we took the free shuttle bus from the information centre. It stops at the end of the causeway and its only a short walk to the island from there. Currently a new bridge is being installed with a plan to remove the causeway. When it’s complete the sea will flow under the bridge and reclaim all the sand which surrounds the island, a problem caused by the installation of the all weather causeway.

Despite being warned how tough the climb to the abbey was it wasn’t as bad as first thought. The hardest part is making you way past all the shops which crowd the narrow passage. Our first stop was Eglisse Paroissiale Sainte Pierre. It’s a small Romanesque church which is the sanctuary of St Michel and a pilgrimage site during the 15th and 16th century. In front of the church a feisty statue of Joan of Arc guards the door and inside a statue of St Michel battles a dragon. It’s a nice little chapel and being not so well known doesn’t receive the huge crowds.

We continued up the steps to the ticket desk and then on to the tour. Mont-Saint-Michel may date back to 708 when Aubert, the bishop of Avranches built a sanctuary to the Archangel. In the 10th century the Benedictines built an Abbey and a village grew up below. During the 100 year war it resisted all English attacks but during the revolution the monks were thrown out and it became a prison. After the revolution it became a historic monument and to this day has remained so. These days supposedly crowds flock to it to “experience the splendour of the abbey that people of the Middle Ages regarded as a representation of the heavenly Jerusalem on earth, an image of paradise” or so the brochure says. It’s got great views granted, but personally I think its just an empty shell. Honestly it’s one of those places that looks better from a distance. How can anyone try to commune with god as bus after bus of tourists step around you clicking their cameras is beyond us.

We wandered through the abbey which was pretty sparse and out into the cloisters. The cloisters were probably the highlight with a curved wooden lined ceilings and stylised columns. The tour led into where the monks ate, this was obvious because it had a few tables but not enough to restrict the hundred or so tourists happily chatting away. Another empty room was signposted as the pilgrims room where they’d stay (obviously they’d have to bring everything). Then it was down to crypt under the abbey where a Black Madonna was tucked into a corner. Obviously this one isn’t held in the same regard as the one at Basilique Notre-Dame de la Délivrande. A few more empty rooms and one with an altar before we entered the room where hundreds of years ago monks would pace and reflect. Then down a spiral set of stairs to the gift shop.

We descended back through the village and we stopped off at one of the restaurants and met one of those “French” waiters that started the whole urban myth. As we went to sit down he redirected us to another table, which was laid out the same but he wanted us to sit there. The next people who entered wanted to sit outside but he directed them to the table we originally tried to sit at. After waiting for service I sent Ron to the bar and ordered two coffees. When the coffees arrived they were pushed across with the bill. We had a laugh with the other people about the waiters antics while drinking our coffees. These days Mont-Saint-Michel is a major tourist destination with accommodation on the island and some world class accommodation, shops and restaurants on the shore. Honestly, it’s been one of Frances top attractions but it’s hard to imagine why,we left feeling a bit flat after all the anticipation, granted it was large and imposing but after seeing inside we think it would have been better to just have adored from afar.

A lost in translation lunch of Galettes at a great little restaurant in Beauvoir. It was another food mistake. We thought Galettes were sandwiches, and found out well actually they’re potato pancakes. Ron was expecting something like a ham, cheese and egg sandwich but it came out all nicely folded with the cheese melted and the egg still runny sitting on top of the ham. We were quite surprised but not disappointed because they were exquisite.

Not far from where we were staying is the German war cemetery of Huisnes-Sur-Mer. It’s actually an ossuary of the disinterments from the cemeteries at Jersey, Guernsey, Sark, Avrigny, Ile-et-Vilaine, Mayenne, Sarthe,Loire et Cher, Indre et Loire, and Morbihan. A circular two storey mausoleum houses the bones of 11,956 war dead. Not all are soldiers, some are babies, children, women and old people. Many of the soldiers are only marked with a plaque with the German equivalent of ‘known only to god’. Some of the brass plaques have wreaths attached but many are like many of our own soldiers un remembered by the passing of time. It may not be popular with many people to visit the graves of your enemy but like us they are not the people who start wars. It is the politicians safe at home who send armies to fight their wars. Reading the story of a 14 year old German school boy, interred there, who died of starvation in an internment camp near Potiers is just so sad. The cemeteries are funded by donations to the Volksbund Deutsche Kriegsgräberfürsorge, a non government organisation who believe that war cemeteries are a permanent reminder for the need for peace.

We spent the rest of the afternoon just cruising around on the bike enjoying the countryside. We cruised through fields of beetroot, leeks, corn, carrots and cabbage, yes lots of salad. There were also lots of fields with cattle grazing. The trees around here fit into two categories, the first have decided it’s too cold and have dropped every leaf in preparation for winter. The others must think they can stick it out for another month or so and have leaves of all colours ranging from gold to brown. It’s quite beautiful to ride along the gold lined avenues. 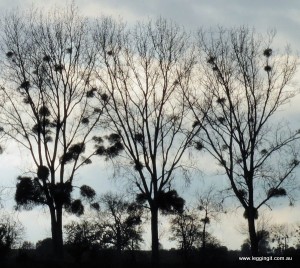 Mistletoe looking stunning in the trees along the roads.

Tonight it’s a quiet night in for tomorrow we head to Le Mans.

Disclaimer: We did accept free entry to the Mont St Michel but there was no agreement as to the content of our review.