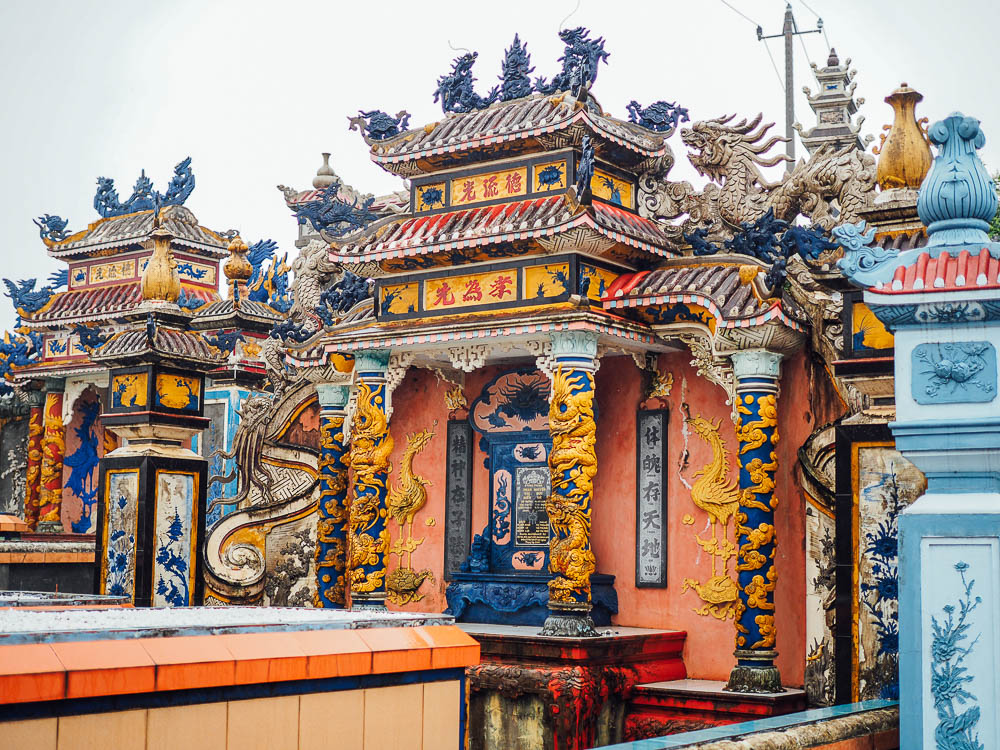 Cemeteries are such interesting places to visit, you learn so much about the culture and social change just by wandering around. We always spend time looking when we are travelling and have asked others some of their discoveries. Adding to our interesting and unusual cemetery posts on Europe , the USA , the Americas, Ireland and The UK and Australia  we now share with you Asia. 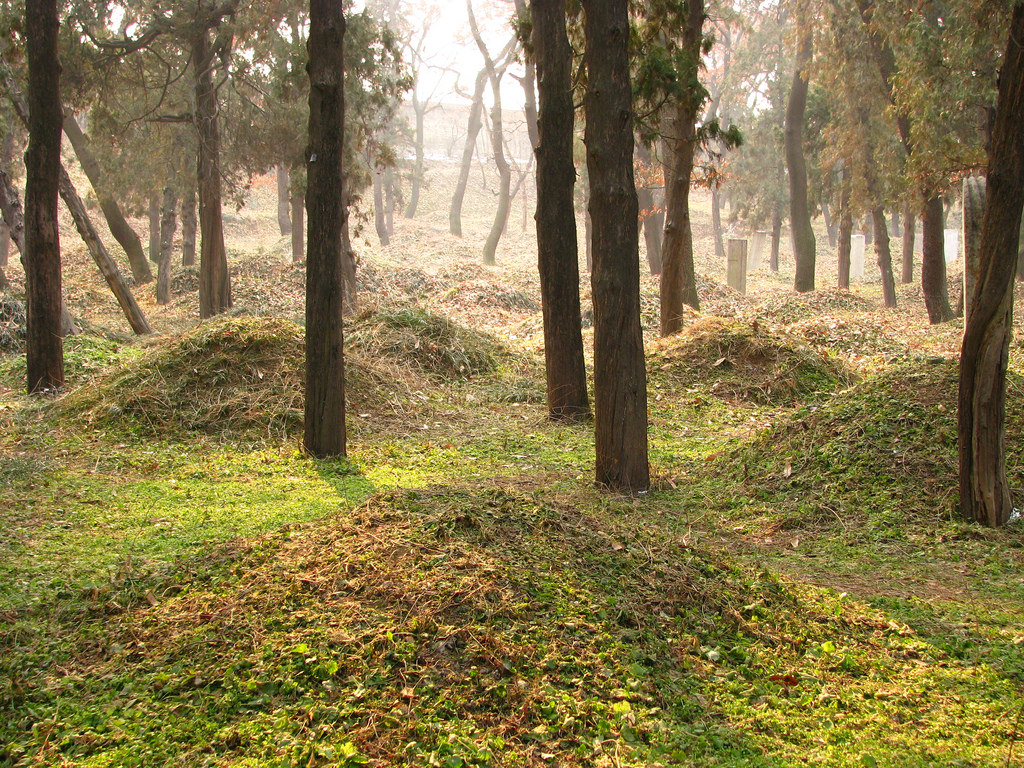 Nick from Nick Kembel
The 183-hectare Cemetery of Confucius is the largest and best-preserved ancient cemetery in all of China. Confucius himself has been buried here for 2500 years, along with over 100,000 of his ancestors from 70+ generations. It’s also considered the largest human-made park in China, and it has so many trees that it is sometimes referred to as the Confucius Forest.

When I visited, the burial mounds, streams, and vegetation in the cemetery were shrouded in mist, adding mystique and a sense of timelessness to the entire place.

Considering how important Confucius is to Chinese history, the cemetery is a popular and sometimes crowded tourist attraction. Therefore, it’s best to visit first thing in the morning or just before closing. Even better, go in winter like I did and you can have the cemetery mostly to yourself. The cemetery is a 15-minute walk north of the Confucius Temple in the Old City of Qufu in Shandong province.

See here for more information on visiting the Cemetery of Confucius, Qufu. 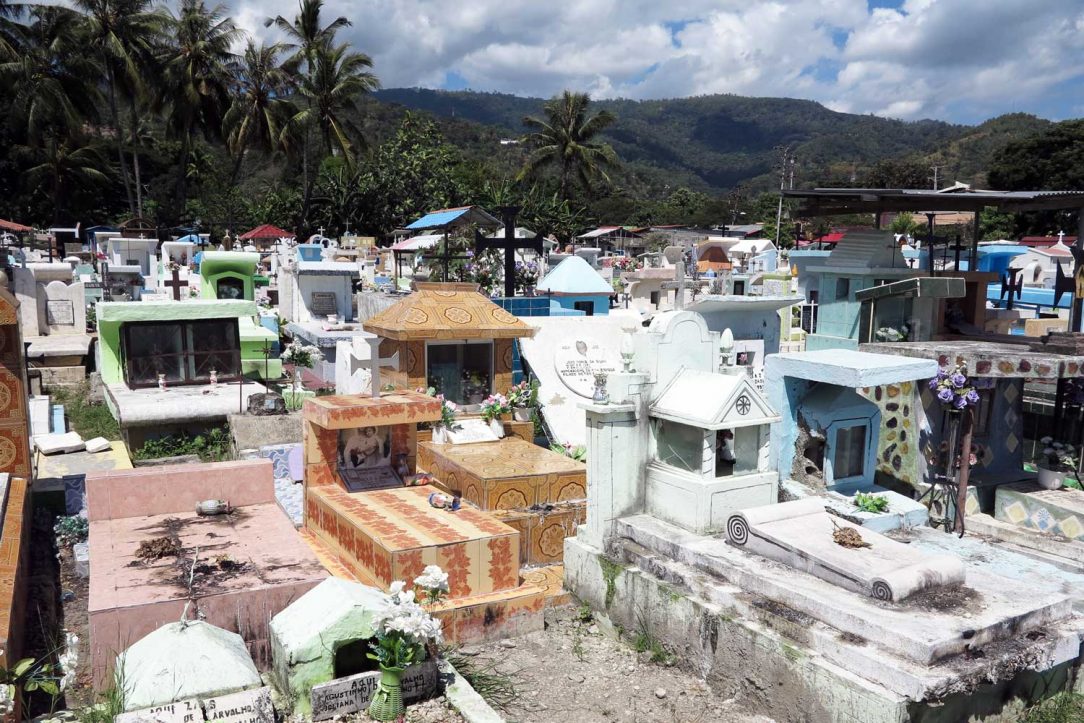 Halef from The Round The World Guys

Santa Cruz Cemetery is located in the center of Dili, the capital city of East Timor. The cemetery is one of the highlights of Dili tourism that you shouldn’t miss. It is considered to be the country’s most sacred place to visit, due to its importance in shaping East Timor’s independence history.

Santa Cruz is laid out like a maze, with many narrow paths between graves. Sometimes, it’s uncomfortable, as you have to step on some of the stones just to get around.

The most popular grave to visit here is that of Sebastião Gomes, whose funeral procession lead to the Santa Cruz Massacre.

On November 12, 1991, Indonesian troops opened fire on a group of protesters inside the enclosed cemetery compound, killing around 250 people. It was the bloodiest day in the East Timor struggle to gain independence.

Many believe this event ignited the East Timor quest for independence.

Join an organized tour, or ask locals at the cemetery for directions to his grave, as there are no signs and it is nearly impossible to find it yourself. 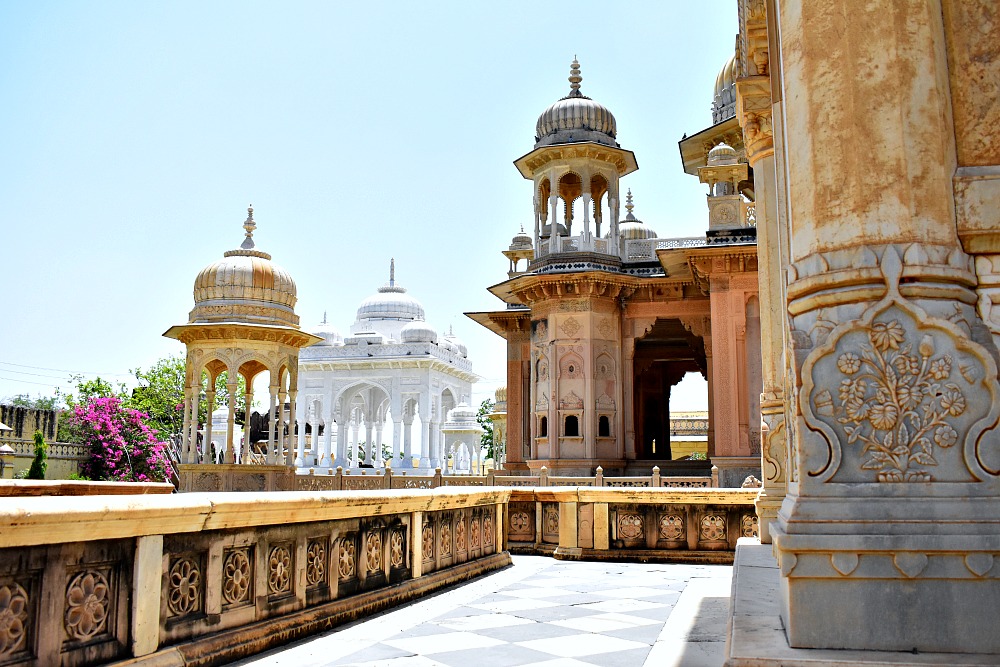 Not far from the centre of Jaipur is the fascinating Gaitore Ki Chhatriyan. A royal crematorium and final resting place of the Maharajas of Jaipur, cremations have taken place here since 1733. It’s a serene space that’s perfect for taking a quiet moment from your hectic Jaipur sightseeing. We had the place to ourselves when we visited and were able to look around without any of the hassle that usually comes with a trip to India. The cemetery is filled with decorated dome-topped chhatris that mark the spot where each ruler was cremated. They’re marvelous pieces of architecture uniquely designed to represent the individual taste of the Maharaja in whose memory it was built. Each one is adorned with detailed carvings of elephants, nature and battle scenes. The Chhatri of Sawai Jai Sing II is particularly popular for its stunning white marble that’s decorated with peacocks and other delightful carvings. The cemetery and its intricately carved Chhatris is a beautiful representation of the luxurious lifestyle of the Royal Maharajas of Rajasthan. 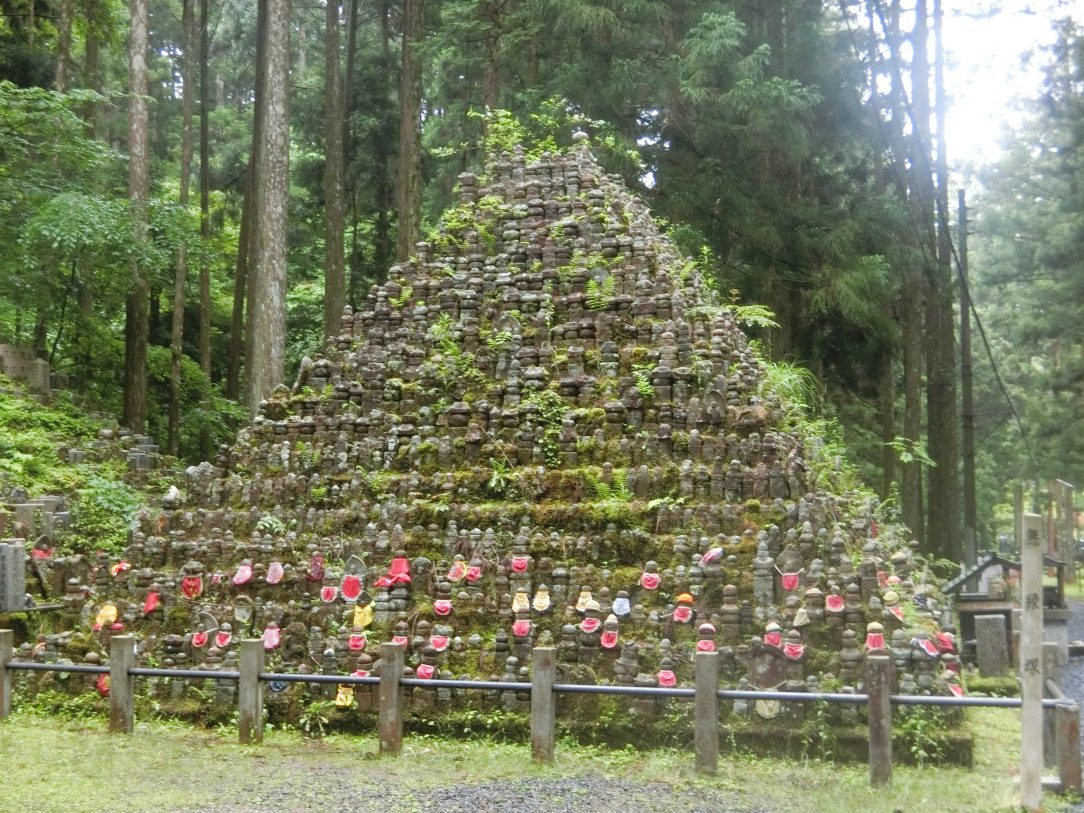 Okunoin is the most popular graveyard in Japan. In fact, there are currently over 200,00 graves there – and counting! This is because of the legend that surrounds this magical place. Followers of Esoteric Buddhism believe that Kobo Daishi (who founded this strain of the religion), entered a cave here to meditate in 835AD. He is still there today, as his meditative state held back death. When Kobo Daishi finally decides to travel up to heaven, he will take all those souls that are waiting in Okunoin with him.

Walking around here is an incredible experience, during the day, and at night. The rows upon rows of ancient graves are amazing to discover. Following the audio tour around you learn about all the famous names from Japanese history – including the warlord Oda Nobunaga! 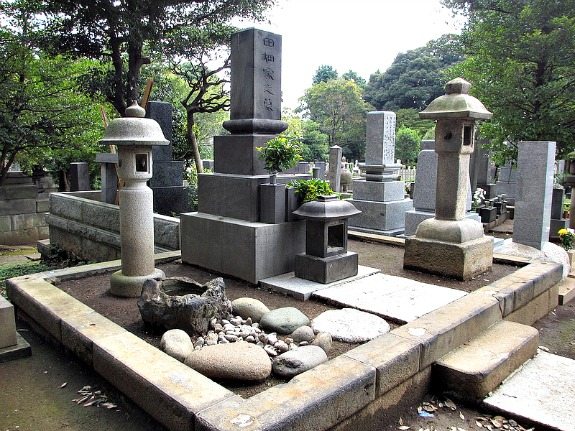 Mary J0 from  Traveling with MJ

Because of the extremely high price of property in Tokyo cemeteries, not uncommonly reaching the price of millions of yen, cremation has become common.  The burial of ashes follows elaborate traditions and rituals, and small temples are erected that feature characters representing the five elements:  Earth, Water, Fire, Air, and Spirit.  As these elements influenced your life, so they will care for you in the afterlife. Memorial services are held on multiple days during the first 100 days after death, and then again on the 1st, 2nd, 6th, 12th, and the 32nd year following the death.  Yanaka Cemetery is well known for its cherry blossoms, and in April the walkways are covered by the blossoms. 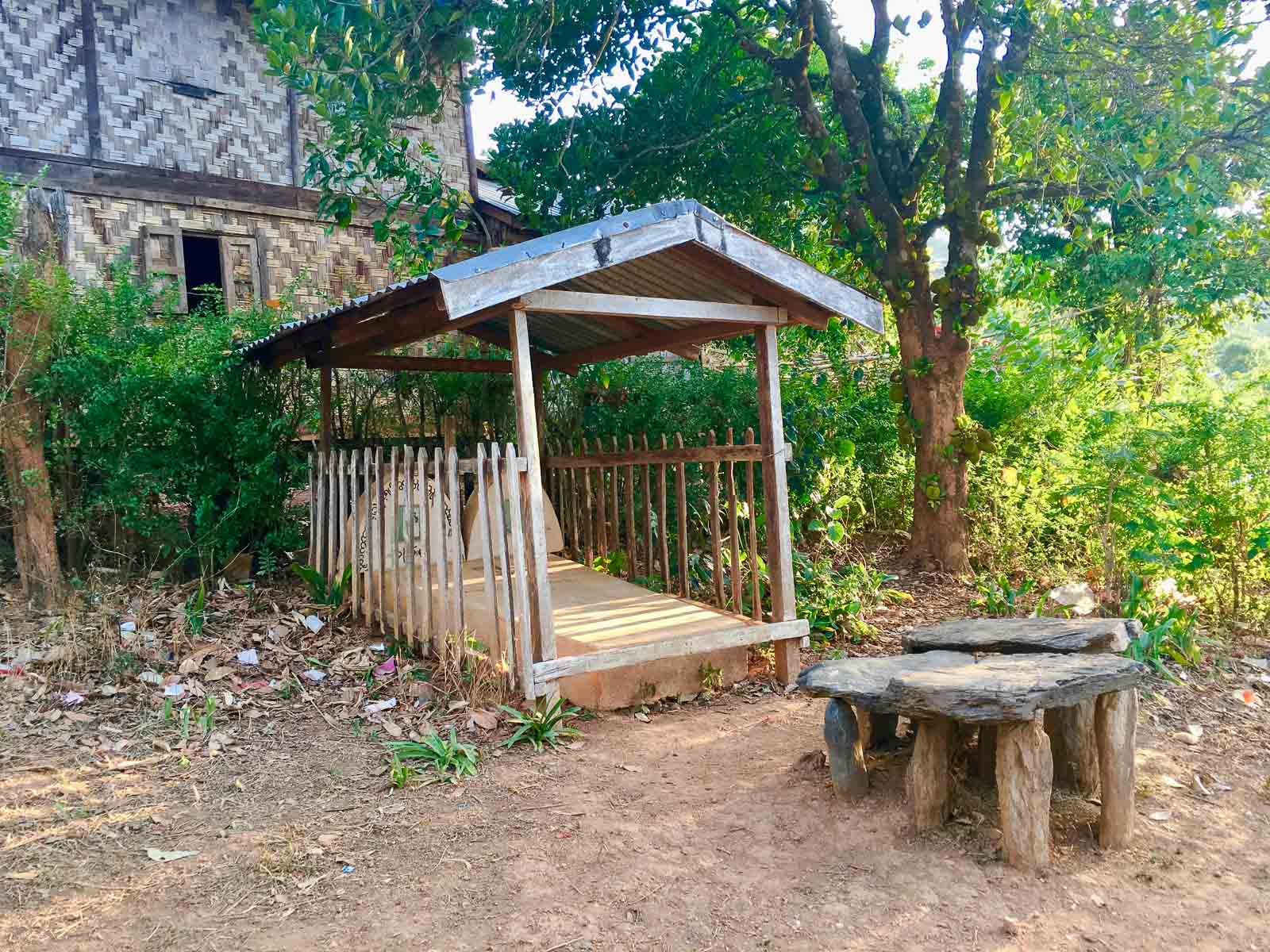 “Follow me,” she called with a smile patting the seat behind her on her blue motorbike. Tentatively, I walked toward her. I didn’t ask where we were going since she seemed friendly. And what harm could come to me in Mindat, a tiny town in the mountains of Myanmar only recently opened to foreigners?

I swung my leg over the back of her bike, and off we went down the hill. Leaving the paved road for a dusty one, we continued down and down passing little houses with puppies and kids playing in the road.

We arrived at her family’s property, where she walked me to a small home and then another larger one. My 10 words of Burmese don’t go far in the Chin State, but we all smiled, and they were thrilled when I shook their hands, just like I get excited when a French person kisses my cheeks.

As we departed I noticed a knee-high stone table structure in the corner of the yard. “Bones,” she told me. “Ancestors bones.” 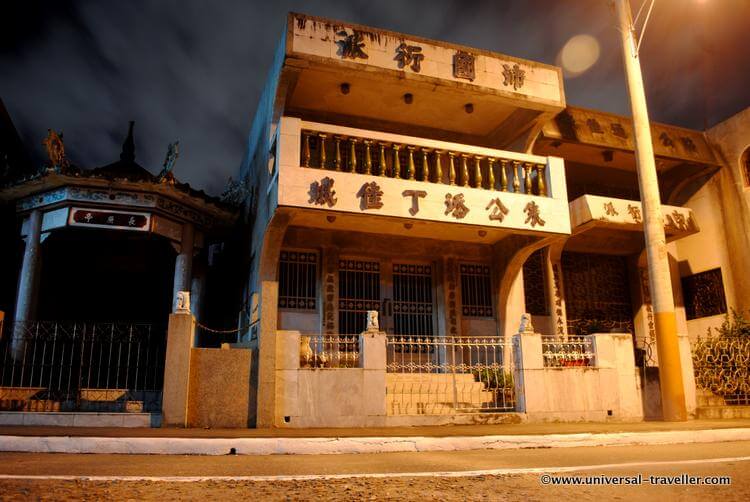 Time from Universal Traveller
The Chinese Cemetery is the second oldest cemetery in The Philippine’s capital city Manila. It is a resting place for Chinese citizens and also called “The Beverly Hills of the dead”. People don’t only visit their deceased but partly live alongside them. Some were even born on the cemetery!

The dead are buried in luxury tombs in the form of houses with furniture, running water, toilets and some even have air conditioners. A plot costs around 950,000 USD … for 25 years. After this time another lease has to be paid.

The cemetery has a size of 5.4 hectares and is home to some remarkable landmarks like the Ruby Tower Memorial, Liat See Tong, the Chong Hock Tong Temple and the Carlos Palanca Memorial. 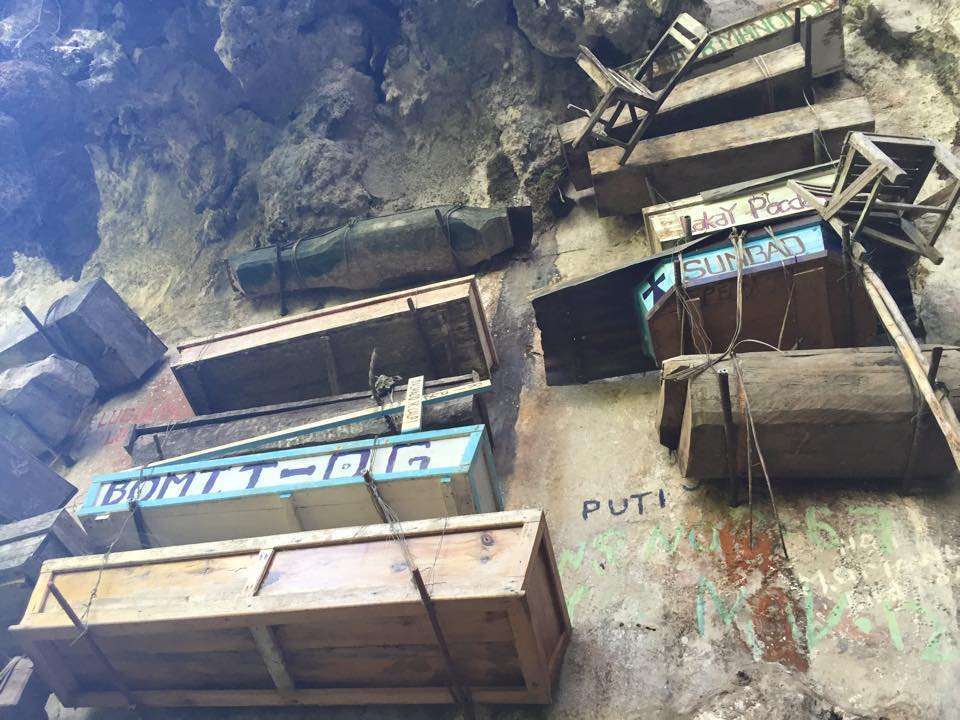 Will from The Broke Backpacker

The hanging coffins of Sagada are a truly remarkable feat of human willpower – within the jungle-clad peaks of the stunning Echo Valley, hundreds of wooden coffins watch from the impossibly sheer rock faces as hikers stare in wonder from below. For centuries, the tribes of Sagada have honoured their dead by placing them in the fetal position within stout coffins and then climbing the many jagged limestone peaks and hoisting the coffins up using bamboo scaffolding and rattan ropes; it’s hard to think of a cemetery anywhere in the world with a view quite like this…. 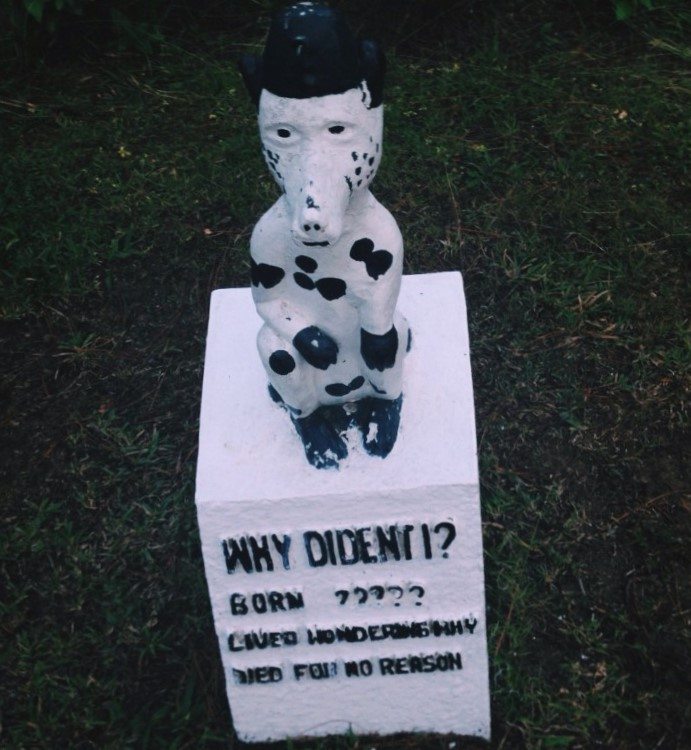 Most cemeteries will give you goosebumps, an eerie feeling, the usual alone-but-not-alone moments, but in this cemetery in Baguio, Philippines, you will see tons of tombs with animal caricatures and you will find yourself smiling (or probably, laughing) by reading the epitaphs.

Located 35km southeast of Hue in central Vietnam, An Bang Cemetery (Nghĩa Trang An Bắng) is the country’s largest resting place. Colloquially known as the ‘City of Ghosts’, An Bang consists of thousands of colourfully painted tombs set on a hilly 250-hectare property.

Some of the mausoleums at An Bang are several storeys high and big enough to accommodate a small kitchen and bathroom—reflecting the Vietnamese conviction in the afterlife and strong belief in ancestral honour. Decorated with intricate motifs, designs mirror that of Hue’s Imperial City and the royal tombs that dot the surrounding countryside.

The unexpected opulence of An Bang—which is quite unlike anything else I’ve seen in Vietnam—is partly explained by the area’s history. Many people from An Bang and surrounding villages emigrated to the US and Europe after the Vietnam-America War (which hit this part of Vietnam, close to the DMZ, particularly hard). The money they repatriated funded the development of the village (which is distinctly more developed than the rest of Hue), as well as construction of the cemetery, which began in the 1990s and continues to this day.

An Bang is usually eerily quiet, especially during the week. Visitors are free to explore the cemetery on foot as they please. The easiest way to get to An Bang from Hue is by hiring either a motorbike or a car and driver.