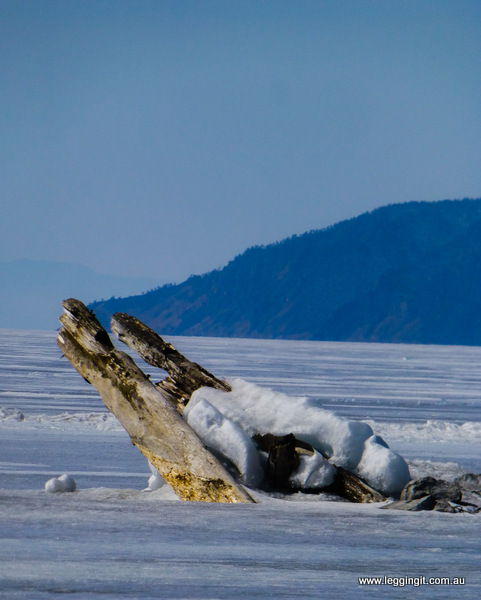 Today we headed to Lake Baikal ,  but first Double Cafe was our breakfast destination getting off the bus not far away on Lenin Street. The weather was coolish but not too bad and I was regretting wearing my heavier jacket. Yesterday’s waiter wasn’t working and we were surprised when the waitress spoke excellent English. We had prepared ourselves to order off the Russian menu, but now it was too easy. The breakfast was delicious and the coffee was excellent (it’s so good to be drinking real coffee again after being in China). The staff at Double Coffee are so friendly and helpful.

Not far from the Central Markets we caught the mini bus to Lystvyanka on Lake Baikal about 60 km’s away for only 120 roubles each. Driving out of the city we passed plenty of old wooden building in various forms of decay or even worse burnt out. The old wooden building are leftovers from the Decembrists in 1825 there was an attempted coup by the nobles. The coup failed and the Decembrists were exiled to Siberia where they firstly were sent to prison for their sentence of hard labour. They worked in coal mines under rough conditions until they were granted amnesty 13 years later. Around Irkutsk they built well-crafted wooden two storey houses with lots of decorative wooden lacework around windows and eaves. Many have since fallen into disrepair due to age or have been burnt out which is such a shame as in their heyday they would’ve been magnificent buildings.

Driving out of the city was like looking at the growth rings on a tree. There were suburbs of old 50’s and 60’s four storey box shape buildings, then four storey tenement style rows of buildings before going through five storey 70’s and 80’s style buildings. There was no style in the architecture just utilitarian design, box with no frills. Some areas the buildings had been painted bright colours but most of the buildings were built with dark bricks, with an open space in the middle surrounded by mud, filth, graffiti and leafless dark looking trees giving the whole scene a grim look.

As we reached the river the buildings changed. There were large brand new two storey cottages which oozed wealth, with Flash cars and boats.

The housing soon disappeared to be replaced by large forests of white cedar and pine. Occasionally there’d be a small village with small wooden houses, many brightly painted with blues, greens and whites.
There were heaps of picture postcard moments driving along in the van but as always dirty windows are not a photographer’s friend. We followed the river which was still flowing and had majestic views of snowy forested hills running down to the river. There were brief glimpses of iced over inlets with men fishing through the ice. When we arrived at Lystvyanka it was amazing, there was a line of ice extending across the river to the distant shore, then ice, as far as the eye could see.

Lake Baikal is about 400 miles long and 20-40 miles wide. It’s supposedly the world’s oldest lake at 50 million years old and also the deepest freshwater lake in the world. If the world ran out of water it has enough water for the world’s population for 40 years. It freezes up to 3 metres thick. It was amazing seeing ships frozen in the ice. People were riding bikes far from land, quadbikes were out on the ice, even a 4wd and two blokes playing golf (or more likely doing some sort of survey). We decided that it looked safe enough and headed out on the ice. In the patches where water was laying on top of the ice, the ice was blue as it was so clear.

We face timed my parents from Lake Baikal to show them the ice and they were a little shocked with the background. One thing about being out on the ice with no trees for 400 km’s ….. It was freeeezing. The wind was howling across the ice and my earlier thoughts about my jacket being too hot were now replaced with thoughts my jacket wasn’t warm enough. The wind found every small opening and I realised leaving my gloves on the dresser this morning wasn’t a wise decision. We took a break in a small cafe until the feeling returned to my fingers.

We had a quick look through the local markets where there were lots of babooshka dolls, (but no Putin Dolls like the Museum) and lots of gems and stone jewellery. The local smoked fish was selling everywhere and we were being offered 3 hot ones for 60 roubles which is a fair price but decided to wait until after we visited the museum. We walked along through the village admiring some of the older houses and it was interesting seeing the amount of building underway of new hotels and guesthouses. The distance to the museum was a little farther than we expected so we stopped for lunch at a small cafe and enjoyed grilled Cisco with grilled tomato and onion and Cisco soup. Cisco is of course the local fish that everyone was smoking. It was delicious apart from a few bones.

The museum was actually 6 km’s away from where the bus stopped and we missed the retro park and church looking for it. Eventually we made it. It was ok apart from all the signs being in Russian. It told the geological story of the lake and its formation. There were heaps of famous Russians and bits and pieces. There was a decent aquarium with local fish species and a rather fat local freshwater seal that must’ve been bored out of his head as it wasn’t a huge enclosure and it had no toys etc. There was a mock up submersible which showed video to about 10 portholes of the descent into Lake Baikal, seeing different weeds, fish and animals. It had a Russian voice over and the Russian guide telling us bits and pieces. The museum was interesting enough for Russian’s but I wouldn’t suggest it for non-Russian speakers.

The bus back to Irkutsk stopped off at the Central Markets but this time it only cost 220 roubles. We looked for a cafe unsuccessfully so caught the bus back to near the unit where we enjoyed our first Papa Johns pizza, ordering blindly off the Russian menu an Italian pizza, and may I say it was the best pizza we’ve had since leaving Australia. We were also impressed with the service the waiter couldn’t speak much English but with our little bit of Russian we were able to enjoy a tasty meal. The waiter’s services skills were excellent. The pizza chef showed off his skills at making bases, twirling them around his fingers and throwing them high in the air it was so good to watch.

14 thoughts on “A Day at Lake Baikal”