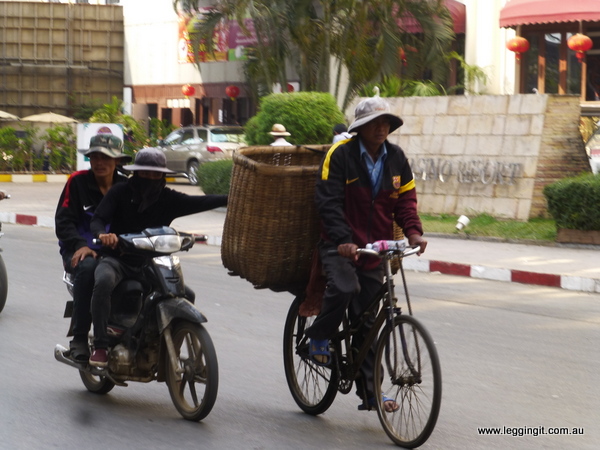 Up early to catch the bus from Bangkok to Siem Reap at 9 am. We caught the BTS Skytrain from On Nut through to the end of the line at Mo Chit which took about 40 minutes. At Mo Chit there were no crowds like our previous visit so we caught a taxi and about 10 minutes later were at the bus station only 50 Baht.

The bus from Bangkok to Siem Reap was a quite crowded but comfortable and Michele had soon met an English lady who was travelling with her two daughters to see Angkor Wat and they chatted on and off for most of the trip. One daughter was a seasoned backpacker who had heaps of backpacking experience and there was also an a girl from brisbane who had travelled extensively and they had alot of information about different places to share.The company served a breakfast meal which consisted of a biscuit, chocolate muffin, orange cordial and a hot coffee..

The north of Thailand was quite different to further south, with crops or sugar cane, palm and lots of tree farms. We stopped about 11 am at a servo for a toilet stop and there were the usual food vendors. Our next stop was the company office near the border where they offered a visa service at a slightly increased price. Then it was on to the border. The Thai immigration was quite straightforward and soon we were through and in Poi Pet (No Mans Land). The area between the two borders is full of huge casino’s enjoying a tax free zone. It’s an interesting contrast between the wealth of these places and seeing the waves of locals ferrying all sorts of goods across the border in all sorts of vehicles, carts, and trolleys.
The visa office is 150 meters from the Thai office on the opposite side of the road and it was filled with westerners trying to get a visa. We had purchased e visas and when we presented our receipts they just shook their heads and said we could try the immigration office up the road but said we’d get knocked back. We paid USD $20 each and they gave us a visa and we headed further up the road to the immigration office. The place wasn’t sign posted so we stayed on the same side of the road as the visa office and at the border we found it. The line of people was horrendous and we waited two hours to get through immigration with only a couple of fans that were actually working. thank god it wasn’t a scorcher. Eventually we got to the front and this Italian girl in front of me first let her friend, then her husband and when she tried to get another friend in front of her I chipped her about it. Well she got all indignant and called her husband and carried on like a pork chop for awhile but in the end her friend stayed in his own line and was processed the same time as her. The good thing about the government bus we took is you don’t have to take your luggage off the bus so this was an added bonus.
Once through immigration it wasn’t long before we were back on our bus and heading towards Siem Reap. The first thing noticeable about Cambodia is the roads, with heaps of potholes and a single lane either way. Looking at the villages we pass through the poverty is quite apparent. With lots of small wooden and tin houses and even some Atap houses. The closer we got to Siem Reap the roads didn’t get any better but some of the houses did. These areas were rice growing areas and it was interesting seeing the Rot E Taek walking tractors in use powering water pumps to fill rice paddies, or transport loads along the road. Michele had never seen one before and was amazed, but she’d just never noticed one before. I pointed out they are not as rare as she thought and spent the next 20 minutes pointing them out for her until she was no longer amazed.
About 630 we finally arrived in Siem Reap. The drive in was pretty spectacular passing all the big hotels and driving into the centre of the city, just near Pub Street, where our bus office was. The bus company offered a free Tuk Tuk to your hotel service which was pretty crazy, (the traffic has to be seen to be believed) . We arrived at our hotel which was only about a km away to find they had no booking and they also had no vacancies. We wandered across the road to the Neak Pean Hotel and they showed us a beautiful large room with a balcony overlooking the road and a large swimming pool. The room was USD $40 per night including breakfast which was comparable to the other hotel so we booked for 4 nights. The staff were friendly and soon we were settled in our room, and showered after our day on the bus. On the opposite corner was a phone shop where we exchanged our remaining Thai Baht for US dollars and purchased a SIM card. It’s a funny money system here where the US dollar is used and the Cambodian Riel is given as small change and nobody wants riels. We had tea at the restaurant which adjoins the hotel and I had a Khmer meal which was flavourome but missing some chilli (so I asked for some) and Michele a Chicken and Mango salad which was pretty tasty. We met a nice English bloke who we chatted to for a while and after a while headed back to the hotel where I got ready to celebrate my 50th year on earth.