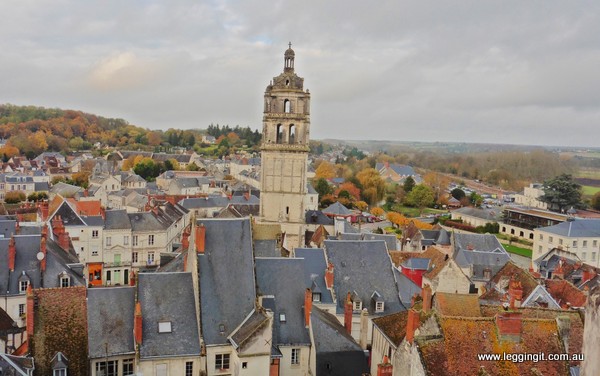 After breakfast Elizabeth packed us into her car for a day out at some of the local tourist spots around the Loire valley. After winding our way thorugh the backstreets of Tours we go to our first stop, Chateau de Clos Lucé and Parc de Leonardo Da Vinci. It’s a Leonardo da Vinci museum housed in the chateau and adjoining grounds. Back in 1516 Francis I invited Leonardo da Vinci to France and he moved into the Chateau Clos Lucé which was adjoined to the royal Chateau D’Amboise by an underground tunnel. Francis I would visit each day to chat to Leonardo. In the park attached to the chateau many reproductions of Leonardos work are displayed. A mock up of his tank which originally was powered by four men using crank handles and contained multiple small cannons was now a kids amusement. His multiple barrel machine gun was also recreated to have smoke coming from the barrels. A swing bridge which could be quickly raised to cut off the access of enemies advance was also recreated. Also in the gardens were hydroelectric generators, multilevel bridges and removal bridges (an inspiration for current removable army bridges)

One of the outer buildings housed a collection of some of his art, sketching and other inventions including his flying machine, the Mona Lisa and a mechanical lion which he made for one of the kings celebrations. As the lion walked a flap opened and fleur de lis, the symbol of the French king fell out.

Up in the chateau the rooms were decked out as they would’ve been when Leonardo still lived there. It was in this chateau that he died in 1519 and a painting in the museum shows the layout of his room that has been beautifully recreated. Another famous resident of the chateau was Marguerite de Navarre the sister of Francis I whose room is also recreated.

In the basement of the chateau and in the adjoining rooms are examples of many of Leonardo Da Vinci’s inventions. Many things are still in use today like ball bearings, rack and pinion, and shipping locks. It was an interesting voyage of discovery.

As it was lunchtime we decided to find a local restaurant. Elizabeth soon found one in a troglodyte cave. Around the Loire valley are lots of chateaus, cathedrals and other grand buildings which have been constructed from local stone quarried from the hills. The quarries are simply cut into the side of a hill and the blocks of stone cut from there leaving big caves which don’t need bracing due to the rock structure. Some of the wineries around the valley have wine cellars in the caves which keep the wine at 13degrees all year around. The term troglodyte of course is given to the people who moved into the abandoned caves and turned them into houses.The restaurant had the usual lunch special of three courses and wine for about €15.

Our next stop after lunch was Cité Royale De Loches, or the Royal City of Loches. It was not that easy getting inside the city gates as the way was blocked with roadworks and oneway streets which we were forced to travel up regardlessly.

The tour started in the royal lodge where Joan of Arc met the Dauphin for the second time in 1429 after his victory at Orleans and convinced him to reach Paris where of course he was crowned King of France. Whilst the King’s fortunes took a turn for the better things for Joan were to get a whole lot worse. In the rooms of Charles VII and Charles VIII were a few displays of different clay and stone carvings, busts of famous French artists and writers. In Ann of Brittany’s room the walls were decorated in gothic flamboyant style (we never knew there was such a thing) it had ermine tips on the walls which represent the emblem of Brittany.

From the lodge we walked along the castle wall admiring the views of the city below, before walking up to the keep. The Keep dominates the landscape at 36 metres high. A huge rectangular building which was built at the beginning of the 11th century with the Kings private quarters in the top floor which doubled as a garrison in times of conflict. Below this was the grand hall where the King would receive guests and entertain. On the lower floors of course was the domestic areas. These days it’s just a ruin with the roof and all the wooden floors now gone. There’s access to the top of the Keep via access stairs and each level has a metal catwalk and safety rails installed. The view from the top of the Keep is pretty impressive and well worth the climb.

The Keep was used as a fortress until the middle of the 15th Century when Louis XI converted it into a state prison. From 1801 until 1926 it served as a ministerial prison. Adjoining the keep is the governors residence and Louis XI tower which house models of the castle complex and how the Keep looked with all the adjoining buildings. There’s also films running however as they’re all in French they were impossible to watch. In the bottom of the tower is the dungeon and torture chamber where prisoners were tortured to gain a confession. Beneath the grounds a network of subterranean passages and quarries where stone was quarried for the Keep was converted to dungeons for political prisoners. One of the Dungeons housed the Duke of Milan, Leonardo Da Vinci’s friend, from 1504-1508 and is decorated with some amazing paintings and scratchings on the cells walls. Overall it’s quite an interesting place to visit.

Just on dark we headed home where Elizabeth served us another amazing local dish.

Tomorrow Jean-Gerard has cleared his afternoon agenda and is taking us on a tour of the Loire valley.