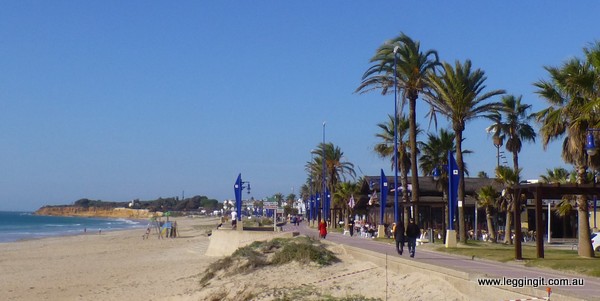 Today we head to La Barrosa to have a break for a month over Christmas, getting out of Malaga proved to be a challenge with the satnav reaching 98 percent before recalculating over and over again. The forecast was for rain however after yesterday’s forecast and resulting light spray we thought we’d be fine.

The run down to the coast turned out pretty good with warm weather all the way. The only disappointing part was getting stuck on a tollway by mistake. Although the speed limit went up to 120 kph another 20 km’s were added to our journey. I don’t know how that works.
When we saw the toll gates coming up we took the exit ramp however the gates were on the exit ramp too so €2.80 later we got off the tollway.

Along the road we found a fuel stop with a local chicken shop next to it. Whoa, it was the best damn roast chicken we’ve had since leaving home. The chicken was basted with rosemary and really moist and tasty. It was probably not the healthiest breakfast but it sure was delicious.

Contrary to the weather report the sun was shining and it was a beautiful day. As we were leaving the sun rolled behind a cloud and that was it no more sunshine for the day as steady light rain started to fall. The rain continued to get heavier and heavier so we pulled off to get out of it but couldn’t find a decent spot to pull up so rejoined the traffic.

The rain eased off as we came over the hills and slowly wound our way down to the coast, where we got our first glimpse of Africa. Michele was especially excited about this.

Eventually we stopped at a restaurant just glad to be out of the rain for a while although I’m not sure they were happy when we ordered just soup and desert.

The rain started again as we boarded the bike which amused the locals. I think they thought we were crazy, but we were only about 20 minutes from our accommodation and we had agreed on arriving about 4pm.

It wasn’t quite so easy to find the address as the satnav was sending us one way which wasn’t right. The iPhone pointed us in the right direction and soon we were at the address.
The owners arrived not long after to show us around our home for the next month. It’s a two roomed apartment overlooking a pool with a garage for the Princess to stay warm and dry. Around the area there’s not much apart from resort style buildings, but there’s a video shop and a few bars, cafe’s so we’ll check it out a bit more tomorrow.