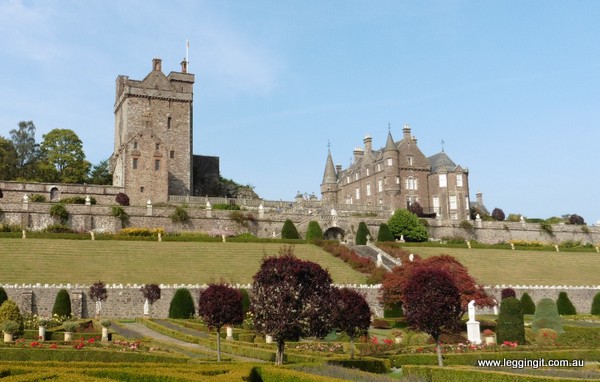 Our journey in Perth and walking in steps of ancestors

After a lovely cooked breakfast at the B&B we decided to check out Perth. Some of Michele’s ancestors lived in Perth in the 1800’s and last time we were here we visited the street where they lived. Today we parked the bike and started walking as soon as we entered the street I knew where we were and pointed to the street they lived in and their shop nearby. We searched in the street and sure enough despite all the old buildings which have been demolished their former home is still standing. We took a few photos of the two buildings.

While we were there we googled the family and sure enough there was a family burial plot in nearby Grey friars Burial ground. We knew the plot number but when we arrived at Grey friars we couldn’t believe it but there was no map indicating the different sections and the grass was waist deep. It seems that the grass is only allowed to be cut in winter. Well we wandered around for about an hour before giving up. We tried to find a map online but it was not to be we even visited the museum but even they didn’t have a map. It just doesn’t make sense.

Nearby was St Johns church which was the place where reformist John Knox gave a fiery speech about idol worshipers in the church which set the crowds into a frenzy storming the various churches and ransacking them. The building continued to exist but had three separate churches in it. The church was renovated in 1926 bringing it back to one church and there is a shrine to those from Perth who died during WWI.The Black Watch Regiment has a lot to do with it and there was a window in their honour.

Exploring the castles in Perth

At two o’clock we headed out to Drummond Castle to visit the famous gardens. It was a nice ride out passing Huntingtower Castle and Methven Castle on the way.
Drummond Castle has an avenue of beech trees over a mile long leading into the castle. The castle is a mixture with an imposing old keep from the early 1600’s and the rest of the buildings remodelled in the 1800’s. The castle is well maintained however only the gardens are open to the public.

The gardens however are beautiful and as you walk from the inner courtyard of the castle down the steps the full magnificence of the place is revealed. The central garden is highly stylised with a giant St Andrews cross running through other designs in low hedge. Beds of striking coloured flowers, shrubs and trees with variegated leaves all add to the colour of the gardens. There’s lots of hedging both low and high, shaped trees, grottos, urns, statues a sundial which tells the time in about 146 different countries. There’s lots of quiet areas with seats to sit and ponder. At the rear beyond the wall is a hothouse, vegetable garden and flower gardens filled with the most amazing blooms.

We spent most of the afternoon wandering about enjoying the gardens before heading back to Perth. Along the way we noticed a sign which read Pictish Stone so we turned off. About a mile away in the little village of Fowlis Wester there is a copy of a Pict standing stone in the market place. When we looked at it we were discussing whether it was real or whether it had been coated in some kind of protective resin but after tapping it we found it was a copy. The real one is actually inside the Kirk nearby, along with another carved stone. The church dates back to medieval times and the simplicity of the church adds to its sense of serenity.

Whilst in the market place we met a young artist who was part of the open house art trail currently around Perth. Her work reminded Michele of our young artist.

Heading back to Perth we stopped at a Toby for dinner for their £5.99 roasts and the place was packed.

Tomorrow we head to Inverness.