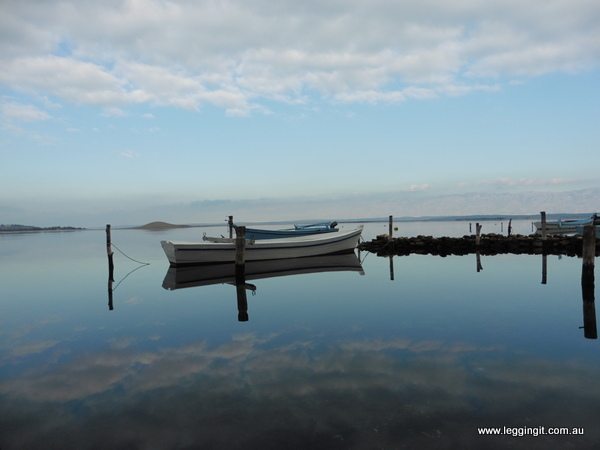 Today we visited the town of Nin, not far from Zadar. Nin is an interesting town with the old section on a small island surrounded by water and connected by two stone bridges. After parking the bike we took a walk around the island. 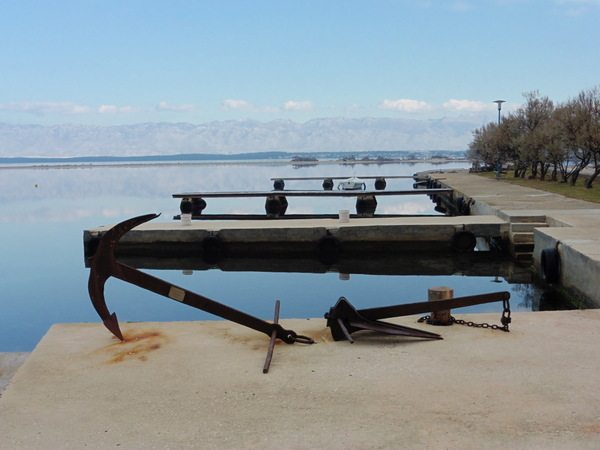 It really is a beautiful spot with crystal clear water water surrounding it and small boats riding at little jetties.
Surprisingly enough there’s a lot of history in Nin despite its size. It was a centre of salt production, the most expensive product in the world. There’s also a Salt Museum in Nin. 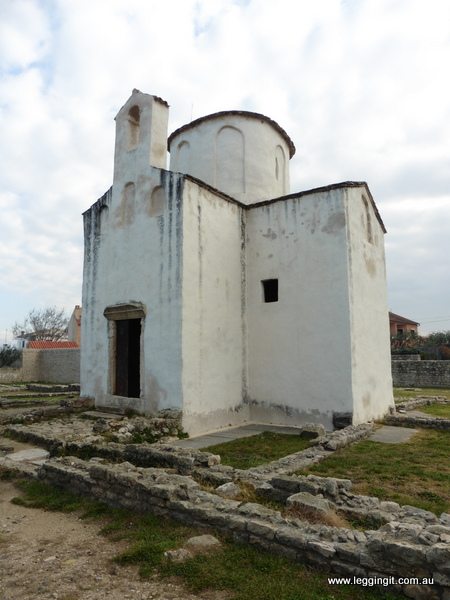 In the town there’s remains of a roman villa and Church of the Holy Cross from the 9th century, called “the smallest cathedral in the world”. A tiny domed building not much bigger than the average bedroom, which despite being empty, when we visited contained votives pushed into a tiny space in the wall. 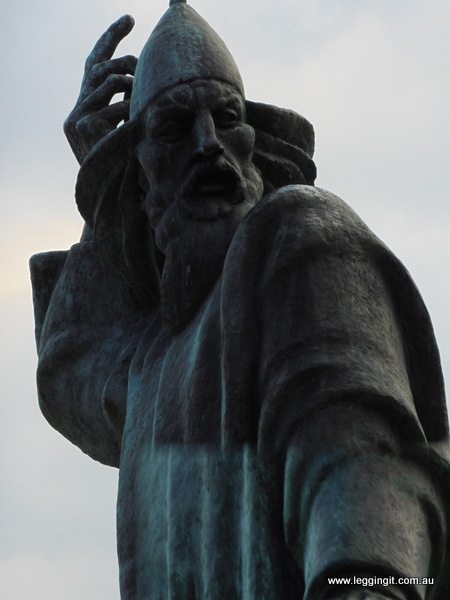 During the medieval period Nin was the seat of the Princes of Croatia and Bishop Gregory of Nin (Grgur Ninski) was an important figure in church politics of Dalmatia. Outside the Coronation Church his massive bronze statue stands with bible in one hand and the other pointing. He strikes a pretty fearsome pose and it’s said that by rubbing his toe you’ll gain good luck. During the 10th century he tried to become the Bishop of Split, the most influential position in the country. He’s also said to be responsible for holding church services in Croatian. The nearby Coronation Church or church of St Anselm (Crkva Sv. Anselma)is quite modest despite inside despite it being in such an important place. Inside the walls are simply white washed and it is elaborately decorated without being ostentatious.
Despite its important place in Medieval Croatia, Nin was abandoned by the Venetians when Dalmatia was sold to them. The town was then ravaged and burnt during wars against the Turks. 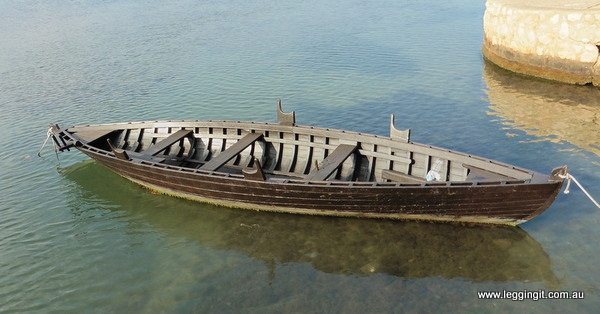 Since the late 60’s the town has become a tourist destination and work continues to recapture some of Nins history. Around the town there’s a bit of construction work being conducted including repair to the cobbled streets. As part of the recreation of historic Nin, by the stone footbridge there’s a reconstruction of a 10th century Condura Croatica, a shallow draught sail boat. 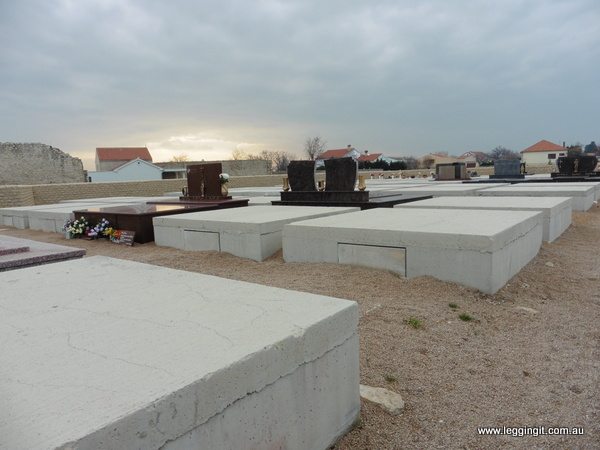 We walked around the ruins of the city walls which have had a bit of restoration work and visited the cemetery. It’s quite an interesting layout of the two cemeteries with bare concrete tombs measuring roughly 3 metres square and standing 1 metre high ready for sale. Locals then simply cover the bare concrete with marble or the covering of their choice. It’s serious business with some locals having their names and birth dates already on the tombs despite still being alive. We’ve heard that grave real estate is big business with people buying tombs on speculation due to their location and reselling to make a profit. 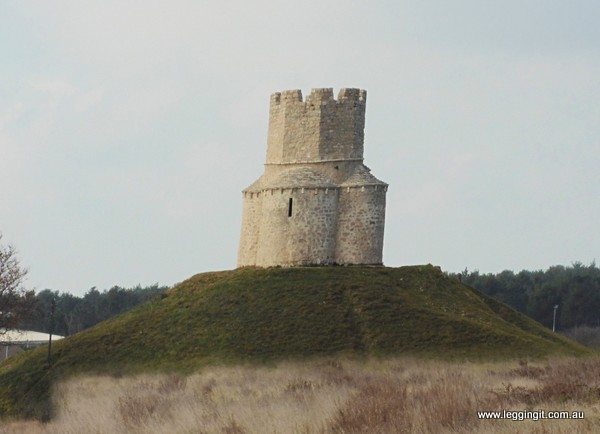 Not far away from Nin atop a mound in a paddock sits the Church of St Nicholas, (Sveti Nikola). Supposedly seven kings were crowned in Nin, and all of them rode on horseback to the Church of Saint Nicholas as part of the coronation ritual. It was here they would be presented to the people and cut the mound with a sword, in the four corners of the world. 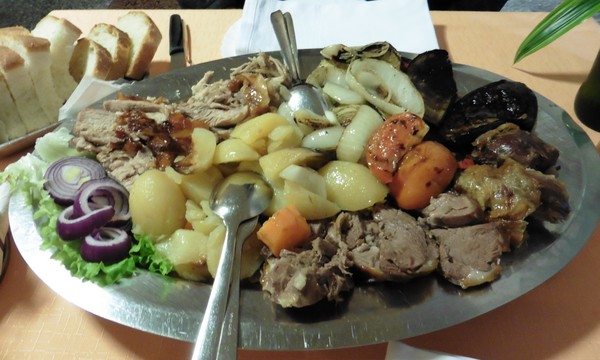 On the way back into Zadar we were able to stop off at one of the many restaurants roasting pigs, lambs and chickens in their outside ovens. For the past three days we’ve ridden past one restaurant with the “Janjetina” sign and the doors of the ovens open so we could see the roasting carcasses. It was too much temptation, so today we just had to stop.
Of course we just had to have Pečena odojka na ražnju – roast suckling pig on a spit and Janjetina s raznja- roast lamb. This is just not any lamb, the lamb was from Pag. A special breed that have adapted to grazing on the wild herbs which grow amongst the rocks of Pag, the only real vegetation on the island. The meat arrived on platters served with grilled mediterranean vegetables, wow what a feast. The meat just melted in our mouths.
It was a great way to top off the day out on the bike.