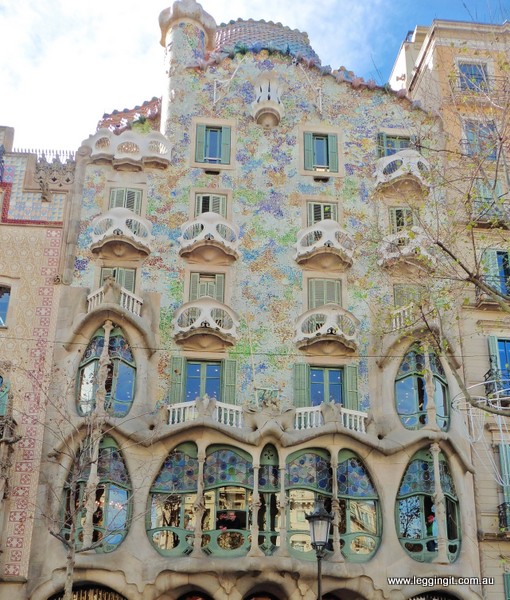 This morning we went on an interesting free walking tour with Tati from Runner Bean Tours. It was the Gaudi tour which traced Antoni Gaudi’s architecture in Barcelona. Gaudi was described by his tutor as either a genius or a madman and it’s quite easy to see both sides of his character. He was the best known exponent of the Catalan Modernism Architecture.

There were two other Australians on the walking tour and strangely enough they were from Ron’s hometown. This is the second walking your where this has happened, the last time in Copenhagen.

Palau Güell was one of the first houses Gaudi worked on for his benefactor Eusebi Güell. Gaudi was a perfectionist and if the work wasn’t right he’d start again. A Palau Güell the grey stone arches, steel work around the ground floor entrance and along the first floor are quite striking. Also the Catalan flag and Phoenix in cast iron is a nice piece of art. Gaudi was also a Catalan nationalist and incorporated the Catalan flag into his work. It’s said that Gaudi’s obsession sent his benefactor bankrupt.

Casa Batlló situated on La Rambla is another of Gaudi’s creations which features a St George theme. Gaudi, apart from being a perfectionist was also a devout Christian. When he wasn’t engaged at work he shunned his possessions and dressed in simple clothes. His Christian beliefs showed through in his work with Casa Batlló having a St George and the dragon theme. In the story of St George and the Dragon the dragon ate all the animals and the people of the kingdom until the King was forced to sacrifice his daughter. That’s when St George appeared, slayed the dragon saved the girl and they lived happily ever after. Standing back looking at this mansion all the elements of the story are there with the balconies representing the skulls of the dead people, the tiled roof shaped like the arched scaly back of the dragon with St George’s sword buried deep into it.

The façade is covered is covered in broken ceramic tiles which create a mosaic of oranges, blues and greens. These days it’s the Gaudi museum and quite a popular place to visit.

Ron scored himself a Chupa Chup by naming the famous artist and fellow Catalan who designed the logo, yes Salvador Dali. Ron was pretty pleased with himself.

Casa Milá another of Gaudi’s creations sits not that far away. It’s said that he drew inspiration from the caves of St George’s birthplace in Turkey. Looking at photos from the area it’s not far off the mark. All of the stone used throughout the mansion was all carved by hand with the openings on the balconies not square. The mansion was being renovated and its said that Gaudi ran over budget and overtime in the construction which upset the owners wife. The interior had ceilings which were like ones in caves so the owners wife as a parting shot had them plastered over. It wasn’t until renovations recently that the original ceilings were discovered and reinstated.

Our last stop was Sagrada Familia which was the last piece which Gaudi worked on. His intention was to create a cathedral visible to sailors at sea. He knew that he wouldn’t live to see his creation finished but was happy also to see new people with fresh ideas. He also left lots of models of his designs. Unfortunately many of these were destroyed during the Spanish Civil war. His creation however were three facades containing twelve bell towers, and another major tower. The facades would depict the three stages of the life of Jesus including the birth, crucifixion, and the glory. It’s a fascinating building unlike any other cathedral we’ve ever seen. This afternoon we are going to look inside it which after Tatiana’s explanation we are dying to have a look.

Sadly for Gaudi his dual life of obsessive work and religious piety came to an end when he was struck by a tram. He was dressed in simple clothes,the tram driver mistaking him for a beggar pulled him off the tracks and continued on his way. When someone recognised him and came to his rescue taxi drivers wouldn’t allow him in their taxis for they were worried the old tramp would bleed over their seats. Eventually they got him to hospital where he died a few days later. The whole city turned out for his funeral strangely enough. Gaudi’s story was a strange tale indeed, much like his architecture and a splendid subject for a walking tour.

If you are looking to learn more about Barcelona Runner Bean Tours are definitely worth contacting.

From here we headed into the Sagrada Familia to experience more of Gaudi.