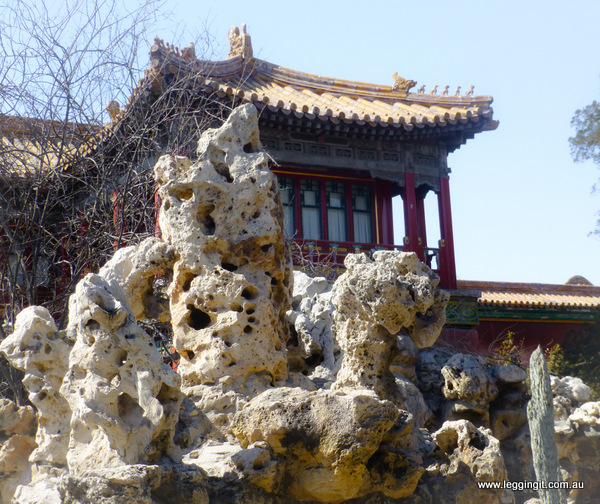 We were out the door early and down the alley to the subway. We were in a bit of a hurry because the Mongolian Embassy visa office is only open from 9am until 11 am. It was also bitterly cold with a lazy breeze blowing (too lazy to blow around you, so it blows through you), but in saying that the sky was clear and blue which is a change from smog which we were expecting. When the sun shone on us it was quite pleasant but in the shadow of a building it was bitter.

We caught the subway to Dongdan then changed onto line 1 and got off at Yonganli. The trains were absolutely packed, when the doors opened and I tried to get off nobody moved. After being stuck in a scrum playing rugby against Frankston a carriage full of Chinese weren’t gonna stop me from getting off the train. I tucked the bag under the arm, tucked my chin in, and as my old coach used to say get low and drive. There were people going everywhere and as the doors started to close I stepped off the train. Michele was smiling because she stayed near the door and didn’t have any problems. lol

After a bit of directional trouble with google maps we headed along Jianguomen St before turning right into Jianhuo St. There’s a few embassies around this area Singapore, Sri Lanka, Ireland and one with a picture of Julie Andrews and Saccha Torte on the walls which we guessed was Austria. We went down Xuishui North St and then were directed to the back of the embassy on Xuishui South St. We handed over our forms we’d downloaded off the Mongolian Embassy website on the Internet and they threw them back at us along with a double sided form. So we wasted our time filling them out last night and paying to have them printed at the hostel.

A nice Chinese bloke lent us a pen and we filled out the new forms and he lent us a glue stick to attach photos. There was only one window operating but the line was short only a Chinese girl, us, and two Chinese blokes who were visa agents. The bloke at the desk spoke pretty good English and asked how many days we would be in Mongolia and as we were only going to be there 8 days advised us just to get a transit visa (which lasts for 10 days) at ¥315 each (for 24 hour turnaround), instead of the tourist visa at nearly¥500. So not a bad bit of advice.

He handed us a remittance to pay at the Bank of China, back up on Jianguomen St just up past the Scitech building. The bank took a nice ¥ 20 transaction fee……Xièxiè. So at 4pm tomorrow we should have our Mongolian visa. Let’s hope they don’t have a POETS day tomorrow (p…. off early tomorrow’s saturday) lol

Also we’ll stop at the coffee shop again across the road from the Austrian Embassy because they serve awesome Lavazza coffee. Coffee snob? Maybe……lol

Returning to the train we caught it a few stops to Tianamen East, near the Forbidden City. Outside the Palace we were pestered by guides hoping to make a buck, and the art show scam girl (they invite you to an art show and then if you don’t buy the heavies come out), we also ran the gauntlet of the tour operators and either said we’d been to places, not interested, no thanks or just ignored them.

Inside the gate we then ran the gauntlet of tour guides again but just bought some tickets ¥ 40 and hired an audio guide ¥40. The audio guide is chipped and will only play an area once so you can’t pass it onto a mate on the way out the exit. The Forbidden City is as big and grand as all the brochures and Jackie Chan movies make it out to be.

Back in the day it must have been a vastly different place though, with life coursing through veins and not full of people snapping photos of an empty shell. The Forbidden City was started in 1406 and took 14 years to build. There’s 980 buildings inside which is pretty astounding. It was home to 24 emperors 14 Mings and 10 Qings. The last emperor abdicated in 1912 and opened up the outer courtyard to the public before finally being evicted in 1924 after a coup.
We spent about two hours walking around checking out the various buildings and hearing the stories of different people, and the uses of different buildings. We ran into a couple from Toowoomba on a tour and had a quick chat. They agreed the wind was a bit like that sneaky breeze Toowoomba’s famous for.

Then disaster struck. The camera took a tumble landing lens first in the fine powdery dust of the garden. We thought it’d be ok with a dust off, but it wasn’t. The fine dust had gotten into the mechanism and as we turned it on the cover wouldn’t retract. We tried blowing it with no improvement. Then wiping it with a wet wipe with no improvement. We even tried flushing it with optical lens cleaning solution however the solution got inside the lens and fogged it up. With the camera kaput and the iPhone almost flat there were no more photos taken.

Trying to get out of the place was harder than expected as we couldn’t return to where we started but had to leave via the East Gate. The scammers were waiting for us and we were immediately set upon by a pair of nice ladies who were wanting to practice their English and invited us for a cup of coffee, (they take you to a friend’s cafe who charges exorbitant prices) we politely refused and walked back the way we came which unbeknown to us was away from the station. By the time we reached the station we were footsore and irritable. We also had to run the gauntlet of tour operators trying to get us signed up for the Great Wall tour and a variety of other tours they were peddling. One company had three people on the street all claiming to be the ‘manager’ and do us a great deal.

The station was absolute pandemonium they had two lines one leading through the scanner, one not. Then once through the scanner we had to line for tickets and there were people jacking the line, others selling tickets on the side for a premium and all sorts of carry on. The trains were jam packed so we just pushed in like everyone else. This time not venturing too far away from the door. One change and soon we were back at the hostel where we enjoyed an afternoon coffee and later dinner.