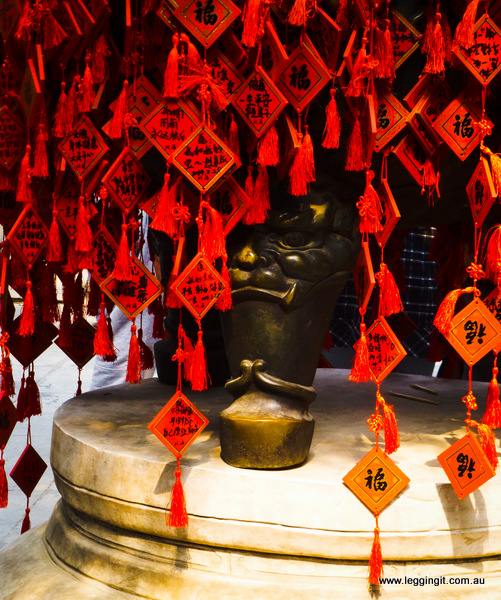 After walking around the lakes yesterday we decided to visit Bei Hai park which is the other side of Di’anmen Lu before heading out tonight to see the Acrobatics show in Beijing.

Bei Hai lake of course is called the Northern Sea and it costs ¥ 5 entry or ¥ 15 for a through ticket which allows entry into a few of the temples etc but of course as always there’s always a hidden cost and the caves are an additional ¥5.There were crowds lined up outside the park and so we hoped the fee was worth it.

Once inside the park we soon found people dancing the tango (very seriously of course) and old men with converted zero weeding wands filled with water drawing calligraphy Chinese characters on the concrete. There were people singing, old men playing cards, and some locals dressed up in their finest traditional clothes folk dancing. There were Chinese soldiers goose stepping in high heels and not all of them were blokes either, as there was a cross dresser amongst them. The military is the same the world over. Lol

We found some oldies playing different instruments with people of various ages dancing in front so stopped to watch. The Chinese bloke next to us asked if we liked it and we said yes. Next thing he was up talking to the band and a familiar tune started playing “Jingle Bells”. One of the ladies dragged Michele up and they were all dancing around having a great time. These oldies really enjoy themselves.
There were pedal boats, party boats, electric boats and a boat high and dry with a bloke furiously digging a channel in the mud to try and refloat it.

Bei Hai Park is a former Imperial Garden which was opened to the public and consists of a few temples and a former residence which was closed for renovation. The temples are set into the hillside and there’s heaps of steps leading from one to another. At the top of the hill sits a stupa which was surrounded by blossoming trees. It was beautiful as the wind blew the flower blossoms were showering down like delicate pink rain drops. Unfortunately the sky was a little hazy so the views of the city and surrounds from the top of the hill were pretty poor.

We returned to the hostel to find a young guy we had spoken to yesterday while with Audrey at the hostel. We had given him a card and he had booked some tours including the Acrobat Show, we had a good chat about his visit to the wall and what his future plans were.

At 6 pm we caught transport from the hostel for the Chinese Acrobat show. We had been told by the staff that we’d be dropped off and that it was only 20 minutes to walk back, so thought “no worries that’s an easy walk home”. The mini bus took longer than expected to get to the destination and there were a few buses parked outside when we arrived. The driver handed the tickets around as a big group of locals all dressed in red tour group caps rushed the doorway all struggling with each other to get brought the doorway. When we all got inside all the Chinese were fighting over one door, however there was no one at the other door so we went inside but were told the doors didn’t open until 7pm so had to return to the door.

When the venue opened it was like the charge of the light brigade with red hatted Chinese running for the seats. We thought they were taking the piss but we soon saw they meant business so quickened our pace. We scored a dozen seats in the right side of the red VIP section but had to fight hard to get them. Some not happy with their acquired seat then continued to climb over the tops of rows of seats till they were happy.

The show opened with an old guy with flowing robes and long white mo saying something in Chinese. The show moved into some fairly static gymnastics with one guy doing handstands, splits, one arm manoeuvres at various heights on the apparatus. There were two Chinese blokes who did a bit of aerial work showing some strength and high flying acrobatics. Three girls were next who were quite flexible doing all sorts of balancing objects including on top of each other like some weird lampshade. Then the girls in feathery dresses with diablo’s did some nice tricks. The three strong men of differing sizes were next with strength and flexibility. Some of their tricks were quite amazing and their flexibility was a sight to see. The feathered girls were soon back riding bikes doing a few tricks one of the better ones being standing on a riders shoulder then jumping from shoulder to shoulder of each rider. The best part of course was when a big mesh ball started being wheeled out and we looked at each other and thought “Globe of Death” yep what every ho hum acrobatic show needs to give it some real punch…..motorcycles in a cage!!!

Well first one then two and before we knew it four were riding like demons around the cage with the stage lights off just headlights and running lights ablaze as they shot around the cage. Then the token female came out and there were five in the cage zooming around. It was a great way to end the show the locals were finally off their seats, making weird noises and cheering. At some stages of the night we thought we’d have to check their pulses. After the show two performers were out trying to flog DVDs to the punters but they were all cheapskates.
We checked google maps and our 20 minute walk home was actually 20 minutes to the bus, four bus stops to the train and then four train stations. Our little group stuck together and made it back to our respective hostels thank goodness for google maps.