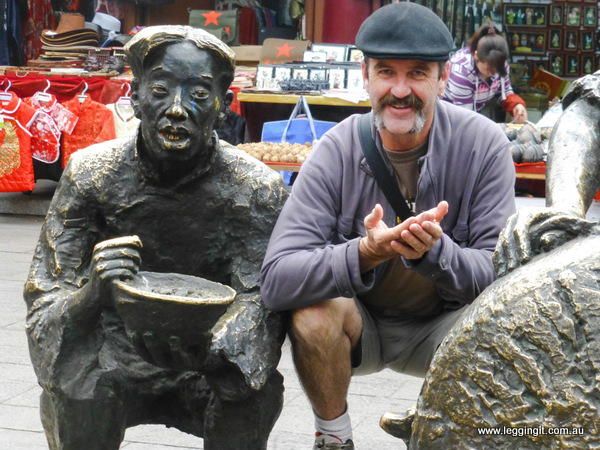 It was our last day in Xi’an today so after a shower, we packed our backpacks and checked out leaving our bags in the storage room. We wanted to try something different for breakfast, so walked to the Muslim quarter. There were lots of different foods on display from noodles, to different types of breads cooked either on the fire or on the tandoor. The Muslim quarter was buzzing with people, looking for cheap trinkets, salted and preserved fruits. Guys cooking noodles, ladies cooking in woks full of oil, guys pulling taffy, then covering it in peanuts and pounding the crap out of it with giant wooden mallets.

We spotted a lady getting food off her own stand so thought this may be ok. They were taking round flat dough, covering it with mushrooms, crumbled cheese and greens, then placing another round flat dough on top, then deep frying it. It was so flavoursome, although a little oily. I had a bowl of barley, cracked grain and red bean soup which was a little sweet but filled the spot. All up the bowl of soup and two deep fried things cost¥15 just over $2 Aus….bargain

We headed to Starbucks for coffee and just outside we met Maggie, a lovely Chinese teenager skipping class so she could talk to English speaking foreigners. She was a really nice kid and we could imagine our own kids when they were younger cutting classes. She spoke really good English and dreamt of travelling and studying in the UK as she was a huge Beatles and Paul McCartney fan (unlike the rest of the kids in China who are all Justin Beiber fans) ?…….Bad taste has no boundaries.She’d met many foreigners in Xian from all over the world.

All teenagers are under huge pressure to do well at school, but in China it determines the rest of your life. Everything seems to be based on scores rather than ability. The hostel had an English teacher waiting on tables and our tour guide was an English language graduate. As she wasn’t going to the best school in Xian there seemed a perception that she may not be able to achieve her dreams. Even though her family live in Xian the minutes needed to travel to and from school are precious so she boards. Her daily routine starts at 6 am and finishes with homework until 1130 at night. Monday to Friday are spent on lessons and the weekend on exams. I think like a lot of kids she was just a little unsure of her future, and with the Chinese system that is not acceptable. There is only one system, preschool, lower school, middle school, high school, university then job, retirement, and finally death. Some preschools start at one year old. It makes me wonder, what if you don’t know what you want to do with the rest of your life.

Personally, I love living in Australia where I know I have a choice. If I don’t like my job, I get another one. Doing what you love is an easier chore than doing what you hate. As a teenager I didn’t know what I wanted to do with the rest of my life, and I still don’t and isn’t that wonderfully unshackling. Plans and goals are great as long as they’re your own, realistic and achievable. My goal today was to wear clean clothes, so I set a plan in place to wash and dry my clothes. Yes achievable. We had a great chat over coffee about all sorts of things and we hope to see her again.

We walked to the wall after getting a bit off track and paid the entry fee of ¥54 which let us into the museum which had no signs in English and was a complete rip off. We were pointed to the stairs leading to the top of the wall and found it was lightly sprinkling, but not enough to really bother us. It was interesting looking across the city wall at all the new buildings under construction on the other side of the wall. We walked to the West gate and found the ticket office. We tried to purchase tickets for the electric car but although they advertised them they turned us away telling us we’d have to purchase them off the driver. The electric car arrived and when we went to purchase tickets he told us to purchase tickets from the ticket booth. By this stage my aggravation meter was starting to tick off the scale as I really don’t like being mucked about. Then when we boarded the electric bus the driver started showing me how to put on a seat belt…… hmmmm So I asked him don’t you think we have these in Australia?

The electric car trip didn’t improve my humour as at every gate we’d have to get off and wait for ten minutes while he drove up and down the ramps as they were elevated. (I don’t think he wanted to waste a single volt of power) Finally we got off at South Gate and decided to walk back and get some lunch on the way.

Somehow whilst crossing the road at the Belltower we ended up heading west instead of north. As the sky was heavy in smog it’s hard to position yourself by the sun. Michele was commenting she didn’t recognise the area just before we arrived at the West Gate, and to top it off she needed the toilet and there were none to be found. oops

As the time was getting on the only solution was to get a taxi. There were heaps at the children’s hospital but all on lunch break or reserved. We tried negotiating the price before settling on an electric Tuk-Tuk. The ride back to the hostel was pretty hectic as the little Tuk Tuk squeezed between cars and trucks. With the clock ticking we grabbed our backpacks and headed for the station picking up some supplies for the train trip on the way.

The station concourse was packed with people just waiting in groups all over the place. There must have been at least 500 people just sitting around. The entrance lines were pretty long and they checked our passports and tickets before we headed to the train building where our luggage was scanned, then our bodies, before a secondary scan and a quick body search.

It was hard to find our train on the notice board and when it came up everything was in Chinese. We headed to the help desk who politely pointed us towards waiting area 2 where we found the comfortable seating area, what a pleasant surprise. We chatted to a nice Kiwi bloke from Haast in New Zealand who was over on holidays which was a great way to kill some time. He shared the same experience as us getting off track and lost crossing the underground walkway at the belltower, which made me feel heaps better. About ten minutes later one of the attendants asked us what train we were on and guided us to the doorway leading to the platform. On the way down we couldn’t find Michele’s ticket so we went into a flat spin as every pocket in my jacket and shorts were turned out, only to find the ticket was safely in Michele’s pocket. Phew……

We boarded the train and soon found our cabin. We shared our cabin with two nice Indonesian blokes who were on holidays. They’d been to china quite often and told us some places worth checking out in Beijing.