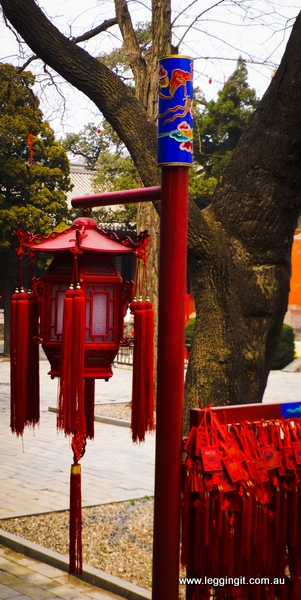 As it was our last day in  Beijing, we had a break from hostel breakfast and visited a hole in the wall eatery. They were cooking local fried pies (a pancake top and bottom with finely chopped spring onion and coriander) and a pancake stuffed with chopped meat and capsicum and folded back on itself. The folded pancake was tasty but the dog’s eye needed something to give it some real flavour (maybe a bit of meat).

We’d been given a list of sites to check out by our Indonesian cabin mates and after doing a bit of checking thought Dongyue Temple maybe ok (well actually I wanted to check it out Michele was a bit templed out but came along anyway) we caught the subway from Zhangzizhonglu station one station changing at Dongsi to line 2 (line 2 is rectangular as it follows the old Beijing city wall). Two things about Beijing subway, when changing lines it’s a trek from one line to the other it is quite astonishing that they didn’t run tracks closer together. The other thing is heaps of stairs, I don’t know how physically impaired get around as they don’t really cater for them. It may explain why we haven’t seen any disabled people using the subway.

It was only one stop to Chaoyangmen and not far up the road to the temple. As we passed the Sinopec building a group of about 20 mainly middle aged women were staging a sit down protest in front of the building. They were trying to erect a banner with pictures of people with skin complaints most probably linked to Sinopec’s operations. They were surrounded by policemen and security who were quite interested in who was watching and my camera did a walk by shooting. The last thing we wanted was to get caught up in some domestic protest that we know nothing about.

We stopped at a Starbucks (ok I know I may have bagged the evil empire a little bit (well actually a lot)! but in the search of a decent cup of coffee in China, Starbucks haven’t disappointed, unlike some of the stores further south in Asia.

is a Taoist Temple built in 1319 and is classified as a cultural folk museum, but judging by a few people still praying there it is still active. The temple complex is separated into 3 main sections. An outer walled courtyard area which leads to adjacent courtyards. Two scary gatekeepers guard the main gate leading to the central courtyard. They’re Generals Ha and Heng (Generals Tiger and Dragon). One holds a spear and the other a battle axe and they’re famed for their special fighting skills. General dragon snorts emitting two powerful white lights that knock out his opponents whilst General Tiger lets out a breath of yellow smoke frightening the wits out of his opponents. If evil figures make it past the two Generals there’s a further ten Imperial Guardians as back up. These guardians being famous Generals within Chinese history.

Off to the sides of the temple are slabs of marble mounted on the backs of turtles recording the names of scholars who’ve passed imperial tests, much like the university in Hanoi. There are buildings on either side of the temple around the outside walls which house various shrines and statues in relation to Taoism. From what we can deduce Taoism is well structured so there are different figures responsible for all the different aspects of life and death. There were separate rooms with brief descriptions of each ministries responsibility from untimely death to forest animals. The things which held true with many other belief systems was the belief in hell for those that transgressed during the current life and reward for those that acted with charity. The whole place had a face lift maybe ten years ago but it was a little rundown compared to some of the main tourist money spinners.

The main temple and the temple in the rear had Taoist monks inside to assist those in prayer. The rear courtyard was ringed with pavilions housing a collection of ceramic artefacts from figurines to ceremonial and cultural objects. Overall it was a quiet peaceful temple in comparison to the ones on the tourist circuit and still in use. A few tours of one or two people drifted through with Chinese guides but no crowds following flags or groups of Europeans.

As it was our last night in Beijing we decided to eat a local speciality Peking Duck. The hostel had suggested a local restaurant the Dawanju, in Dongsi Street, not far from the hostel. We caught up with our friends Gerry and Deb who’d just arrived and were staying up the road a bit in a Hutong area. The Dawanju was on the second floor and we were ushered to a table overlooking the road. We looked through the menu and there were lots of delicacies like ducks tongues, pork entrails, things made with animal blood, feet, heads and entrails. Gerry and I were looking forward to a nice hearty dish of Chinese delicacies but we were outvoted by the ladies. We settled on the princely Peking Duck the next step down from imperial Peking Duck but not the commoners Special Peking Duck, a difference of¥10. Apart from the duck, we ordered fried rice and special stir fried vegetables with noodles. The stir fried vegetables came with special ultra thin pancakes (like rice paper) so that we could make spring rolls. It was good fun adding the veggie noodle mix and rolling them up. The duck arrived and it was a section of breast which had been cut in 5 mm thick slices leaving a nice piece of glazed skin attached to the slices of meat. The duck was served with 50mm long (2″) cucumber and spring onion straws, thick sweet soy sauce and the same type of rolling paper as the veggies. It was quite delicious. Gerry and the two ladies blew the froth off a few but my order was lost in translation so I just pulled out the water bottle.

After dinner we took a stroll back to the hostel for a drink at the bar where we said our goodbyes. Hopefully we’ll catch up again somewhere in our travels or in the States.