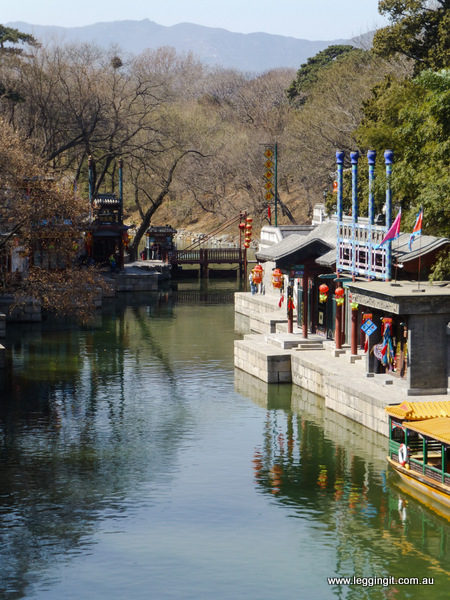 We decided to check out the Summer Palace which was two changes on the subway.

The Summer Palace is the former imperial palace built in 1750 and its got a bit of history in regard to the fall of the empire. The palace was largely destroyed in 1860 during the Second Opium War then rebuilt in 1886. Then it was attacked during the Boxer Rebellion in 1900 by the eight European Allies. The Empress Dowager Cixi is said to have diverted 3million Taels of silver, money raised for the Chinese Navy, for reconstruction and enlargement of the palace. Six years later the Chinese Navy were crushed by the Japanese in the Sino-Japanese War.

We came in via the north entrance and from this side through the ticket gate we crossed a bridge over a small tourist village fringing a small river entrance fee ¥10. We bypassed this and headed further up the hill to a small tree lined area then up some steps to a large terrace with a Buddhist temple almost overhanging it. We climbed more almost vertical steps to the temple before continuing first to some smaller buildings, the stupa and then on to the temple on top of the hill adorned with hundreds of Buddhas on the outside and a few bigger statues inside.

The back of the hill was quite peaceful with lots of trees and a nice natural feel about it. There were a few pavilions and houses on the side of the hill. Michele thought they seemed abandoned, which they were as all the royal family are long departed. The back of the hill ran down to a lake which was quite picturesque and very busy. Tour groups marched behind guides with raised flags and bull horns barking out vital information. Whilst on the water pedal boats, electric boats, and large tour boats all vied for position on the water. Many people bound for the island in the middle of the lake at an additional entrance fee. We walked around the edge of the lake and slowly made our way back towards the exit. It was a nice place to visit next time we’ll probably enter via a different entrance and maybe spend a little longer here.

The Lavazza coffee shop across from the Austrian Embassy was our focus for the remainder of this afternoon. They really make the best coffee. To celebrate the imminent arrival of our Mongolian Visa’s we shared a beautiful chocolate brownie. It was so good we celebrated by ordering another. Just after 4 pm we picked up our passports with Mongolian visas attached. Yippee