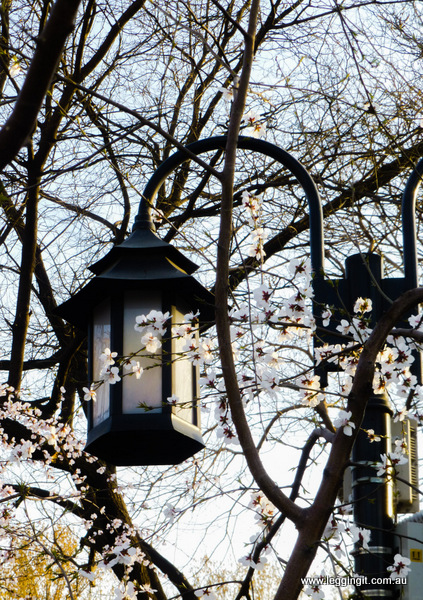 I was flying solo this morning, as Michele wasn’t feeling well. After breakfast she went back to bed and I headed off to Tiananmen Square. I got off at Tiananmen East station and walked down to the Forbidden City end of the square before crossing the road and going through the security check. There’s no chance of feeling lonely in Tiananmen because there’s thousands of people. Tiananmen square is the fourth largest square in the world and with all the people they really need the space. The line of people for visiting Chairman Mao’s Tomb was 5 deep, stretching from outside the tomb down the block, around the corner down to the exit and back up to the corner. The line was slowly moving forward doing the Cliff Young shuffle, but judging by the length of the line I’d be drawing a pension by the time I’d made it to the exit.
I looked around at the other end of the square at the gate before catching the subway out to Bei station. The Temple of Heaven was just around the corner from the exit from the subway. I purchased a through pass ¥30 and headed through the East gate. The temple is set on a huge park, 273 hectares,and consists of a series of temples and shrines. It was a glorious sunny day so heaps of people were out just enjoying the parks and gardens. There were people dancing others playing kick to kick with a shuttlecock, ladies were knitting, people were playing cards, checkers, mahjong, flying kites, playing guitar and singing.
I headed up towards the Temple of Heaven (well actually its the hall of prayer for good harvests, but when people google the temple of heaven this is what comes up) and ran into our old kiwi mate from Haarst that we’d met in Xi’an. I had a quick chat and wished him luck on his travels before continuing on to the inner temple. The Hall of Prayer for Good Harvests is set on a hill surrounded by carved stone fences on a number of levels. Back in the old days the emperors sacrificed animals and burned incense sticks to pray for good weather for the crops here. There’s two pavilions on either side, another at the rear and the whole area is surrounded by high walls. The steps leading up to the Hall of Prayer have carved panels of clouds and dragons which is obviously lucky as everyone’s been throwing coins and notes on them. The Hall’s round in shape, (as the ancient chinese believed that the heavens were round and the earth was square) with a round brass dome in the middle of the roof. Inside is decked out with sacrificial altars and nice artistic painting. There were heaps of people inside the complex taking photos, flying kites there were even couples getting wedding photos.
To the south of the hall is the Imperial vault of heaven which is connected by the Imperial Red Stairway Bridge. The Imperial Vault of Heaven is also circular and surrounded by a circular wall called the echo wall which of course if you’re on one side you can hear someone speaking on the other side. I tried to find out the truth about the temple but all I heard was Chinese whispers.lol Sorry
There’s also two halls either side of the temple with shrines inside.
Not far from this in the southern part is a large slightly raised area which is the Circular Mound Altar where emperors held ceremonies for worshipping Heaven. There’s also a big oven for burning offerings and areas where marquees were set up for the emperor to dress before the ceremonies. In the west of the park is the Hall of Abstinence where emperors held fasts before ceremonies and the Divine Music Hall where they all got their groove on.
There were rosé gardens, stones representing the seven kingdoms, imperial kitchens and other buildings.
The best part was the park was it was well forested with small pines and other deciduous trees. The grassed areas were fenced off but I easily stepped over it and walked around on the grass enjoying that wonderful spongy feel beneath my feet.
It’s a nice park even if I wasn’t looking at the temples I would’ve enjoyed sitting around watching the locals enjoying being outside. Chinese people really enjoy their public spaces. All the big parks around china we’ve found people dancing to music, practicing Kung Fu or Tai Chi, flying kites, playing cards, checkers, mahjong, knitting, singing, or kicking the shuttlecock it’s wonderful to see.

I met back up with Michele and we headed to catch up with a lovely couchsurfing friend from Beijing, Audrey. After a little bit of location dislocation (we were somewhere and she was elsewhere) we finally got our act together and met up. Audrey’s wonderful boyfriend Nicky, looked after us in Kunming, sorting out train tickets, taking us out for an amazing lunch before rolling us bloated with food to our hostel, and we were really appreciative.
We took a look around the lake (although they call them the Qinhai and Xihai seas, don’t ask us why) and it was buzzing with hotels fringing the lakes edge packed with people, other people selling all sorts of things on sticks, people boating and crowds of people drifting by enjoying a beautiful day in the sun.
We walked along enjoying the lovely atmosphere, it seemed everyone in Beijing was on happy pills or maybe beautiful weather was having an effect on them. There’s a big controversy about the chinese eating dogs but after seeing a lady taking her pampered chihuahua (which was wearing little red boots) for a walk I’m thinking that not all chinese would be in favour of sticking Fido between two slices of bread. Traditionally dogs bred for eating are actually farmed but we’ve heard that unscrupulous businesses have been capturing strays and slaughtering them for the dog meat market. This caused a huge scandal, impact ing on peoples opinions and less people are loving their dogs….. hot, deep fried or on skewers.
Talking about eating, Audrey took us to her special Hotpot restaurant for dinner. It was a truly wonderful experience. When we arrived there were no tables available but they had some tables set up outside with bowls of sunflower seeds, snacks and packs of cards. We sat around playing cards and eating sunflower seeds while drinking black currant juice. When a table was free they ushered us upstairs for Hotpot. We’d never had Hotpot before and to explain it briefly the hotpot was a 30 cm square pot split into three sections in the middle of the table. Underneath is a gas cooker to heat it. A small round section in the middle containing mushroom broth, and the remainder split in half with a hot and spicy soup on one side and a mild one on the other. Audrey ordered for us and we made our own dipping sauces from various bowls of ingredients on the salad bar style tables. I chose some sesame paste, chilli, soy, coriander and grabbed a plate full of Kimchi (Korean pickled vegetables).
The food trolley arrived and it was filled with plates of thinly sliced mutton and beef, whole fresh coriander, Chinese lettuce, sliced lotus root, a Chinese vegetable with the taste and consistency of potatoes (same same but different), black rice porridge, and steamed rice.
It was great fun picking the fresh meat and veggies with our chopsticks, dipping it into the boiling liquid, swishing it around until it was cooked, then dipping it in our sauce bowls before eating it, before starting the process again. We had a wonderful evening enjoying Audrey’s company, she really picked a great restaurant. To top off a really special evening two blokes on guitars serenaded us with Chinese love songs. Great service, great meal, great music and to top it off great company.