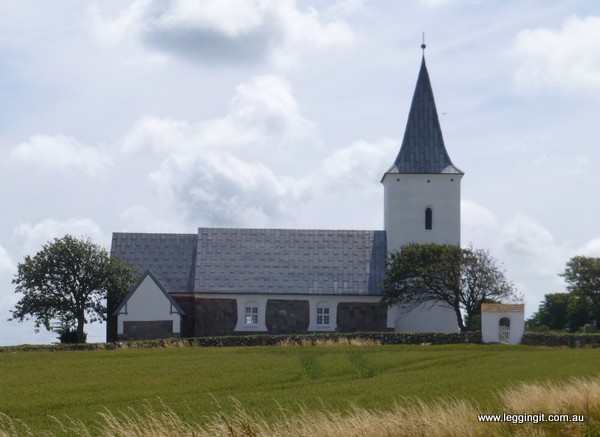 Packing up the bike and leaving Skagen was pretty hard. Our host told us of some crazy Norwegians driving little grey Massey Ferguson tractors in convoy not far away so we decided to check them out. The Norwegians were having a great time with their huge Norwegian Flags strapped to the side of their “little grey fergies” fluttering in the breeze. Some were towing trailers, and others had lounges attached to their carry-alls full of happy smiling Norwegians. They were all just having fun. There was even a Fergie with chrome exhaust pipes sticking out the side, a sort of pimp my ride “Fergie Style”. The traffic was banked back a long way as the the little grey beasts roared along at an impressive 40kms an hour. It didn’t worry us however, we just enjoyed the moment, blowing our horn and waving as we passed.

Travelling down the coast was really nice we drove through Hirtshals, the place where ferries to Norway leave from, Løkken on the beach, before stopping at Blokhus. Blokhus was holding its annual wood sculpting festival so the little village was crawling with people. We drove along the beach where heaps of swedes were enjoying a beautiful Summer’s day. We travelled through the lake region around Thisted checking out Limfjord where we stopped at a road side park which had an environmental centre and viewing hide. Both buildings had traditional thatched roofs which were quite stunning.

Arriving in Struer we stopped for a coffee near the marina where we met some friendly locals and enjoyed Danish Hotdogs complete with chopped onions, fried onions, mustard, tomato sauce and sliced dill pickles.

A short ride from the city brought us to our hosts house in a little country village. They were really nice friendly people, showed us around their local church which was built in the 1700’s and we were amazed at how well kept the cemeteries are with the customary small hedges. We talked late into the night about all sorts of things including the reintroduction of beavers into Denmark. Too soon it was getting dark, which means midnight here so we hit the sack.

Tomorrow we’re going on a beaver hunt, well we’re planning to maybe see where they live.