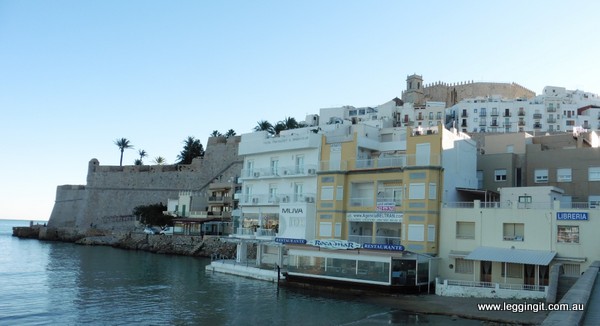 The church bells were ringing as we woke this morning and looked out the window. What Juanita’s missed in service it sure made up for in views. It had astounding views of both beaches of the town and up into the surrounding hills. There were no cafe’s open in the walled village so we took a walk around the outside area finding a small cafe, full of locals. The service was pretty good and we enjoyed a simple breakfast of coffee and bacon rolls. The owner was even joking with us, by putting his freezing hands on Ron. It’s amazing the difference trying to speak a little Spanish makes.

After breakfast we walked around the fishing boat harbour, checking out the boats and were intrigued watching two old ladies in traditional black dresses repairing fishing nets. It was beautiful walking along the beachfront checking out the local beaches, as the sun was absolutely heavenly after yesterday’s downpours.

Arriving back at the bike we discovered our laptop bag with ipad, laptop and both hard drives lying next to the Princess, in our hurry this morning we had forgotten to put them in the pannier..we just looked at each other realising how lucky we were. The computers are replaceable but the hard drives have all our photos both from this trip and home, movies and music on them. We feel we have now used up two of our nine lives 🙂

The Princess received a patch up with Ron tie wiring the fairing together before covering all the damage with gaffer tape. He wished he was at home where he could’ve carried out a proper repair. The band aid fix however, should get us through to Cadiz where he can remove the fairing, straighten all the brackets underneath and patch repair the fairing with a fibreglass kit.

The bells were chiming twelve as we loaded up the Princess and headed out of Peniscola. It’s quite a picturesque place and pretty quiet offseason so we’d like to come back and spend a bit more time to explore it properly.

As we hit the highway south, once again we noticed with sadness, in the dusty laybys prostitutes. It is such a sad thing to witness desperate women just sitting on plastic chairs waiting for customers 🙁

The ride along the coast in the sun was much easier than yesterday’s rain with the bike happily humming along. Rounded granite hills surrounded large plains absolutely covered in orange trees. The further south we travelled the more orange trees were visible, there were millions.

Ron took the exit to La Puig as it was lunch time and we wanted to check the satnav before the final run into Valencia. A simple little bar in La Puig was a real gem find with us stumbling through our Spanish to order the lunch special. A huge plate of seafood pasta, grilled chicken, fresh oranges, bottled water and coffee cost us a measly €7 each.

The trip into Valencia was pretty easy with us parking on the piazza outside the accommodation.

The accommodation was nice but a little unfriendly. We were warned about noise but 1.30am in the morning we were woken up by the owner coming home and putting the lights on, which flooded our room with lights as we have no curtains.