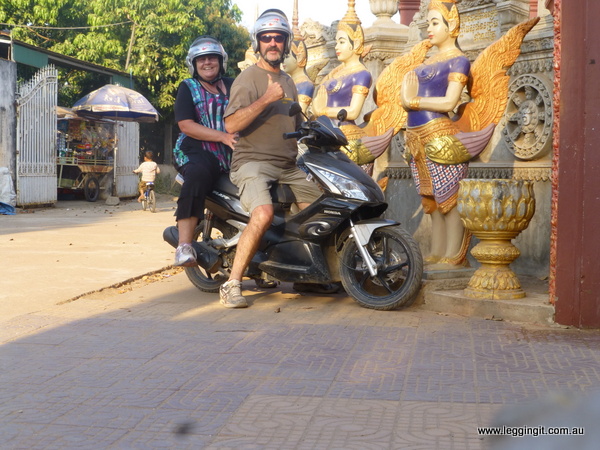 Everybody in Phnom Penh must be about five minutes late. They’re all rushing trying to get ahead, pushing into non existent gaps in traffic riding over footpaths, cutting corners, and for a non local this can be a bit off putting but if you follow my simple rules you’ll be driving like a local in no time flat.

1. Pulling out into traffic – Do not turn your head or even check your mirrors if you have any fitted when pull out from the curb. Its everyone else’s responsibility not to hit you. Exceptions see rule No 2.

2. Might is Right- generally the biggest vehicle has the right of way. If you want to avoid a fiery crash remember this rule.

3. The Hook turn- If you’ve ever driven in Melbourne you’d know about the hook turn, where if you want to turn right at an intersection you pull to the far left of the intersection until the through traffic and trams are clear and then perform your turn. It seems in Cambodia has a similar turn its called the “oh this is my turn” generally you wait until traffic has built up and then you just perform your turn. It’s great fun, it has people going in all directions taking evasive action.

4. Stopping at Traffic Lights. Stopping at red lights is optional, even if it means crossing through oncoming traffic. Exceptions see rule No 2.

5. Giving way at intersections. Generally the first person to blow their horn even if they are not at the intersection has right of way. Exceptions see rule No 2.

6. Indicators will generally not be used on any occasions*(See note)When I hired a bike I asked about the set up switches etc, as they pointed to the indicator switch they said “don’t worry about this” The horn has replaced the indicator and it is to be used on all occasions, when turning, when over taking, when approaching intersections, when crossing traffic against a red light. The only form of visual indication permitted whilst carrying passengers (that are not as brave as you) is for them to extend their arm and wave it as if bouncing an imaginary basketball harlem globetrotter style.
*Indicators may only be used if doing a U turn into the oncoming traffic just to confuse the hell out of them.

7.King Of The Road.If you have a really expensive Lexus SUV, then you just don’t think you own the road you know it. Just make sure you don’t miss any facebook status updates, or any important calls by keeping your phone close to your face.

8. Lights. If fitted or working are not to be used during daylight hours because these not only make motorbikes more visible to other drivers but make you more visible to the Police who will pull you over and fine you. At night lights are purely optional, if you an see why use the lights, they only attract attention.

9. Police. They’re underpaid and overworked, and like nothing better than “blowing the froth off a couple of coldies”. So have some ready cash in your pocket for when they pull you over for some bullshit excuse. Especially on weekends.

10. Getting to Where You Want To Go. Generally throughout Cambodia you drive on the right side of the road. However, if the shortest route to your destination is via the sidewalk, gutter, between tables at the sidewalk eatery, or the other side of the road and up a couple of streets even if it means going against the flow of traffic just go for it. Just have some ready cash on standby in case the police aren’t looking the other way.

I hope these simple rules help and safe riding.

2 thoughts on “10 Simple Rules for Riding in Phnom Penh”