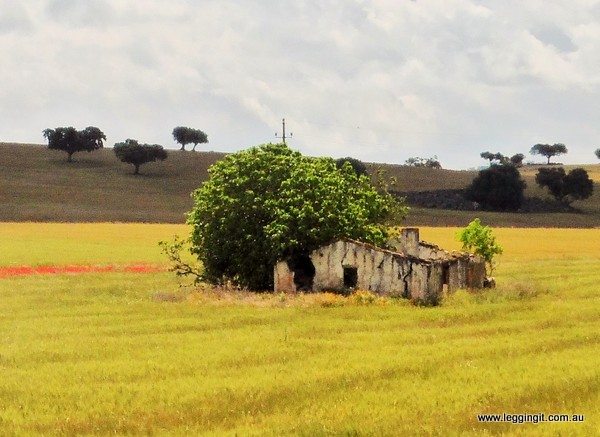 The skies were overcast and gloomy as we loaded up the bike outside the hostel so we could head to Reguengos de Monsarez. We contemplated putting on raincoats but decided to wait and see. When Ron went to start the bike, well the battery was flat. I started wondering what we were going to do as Ron pushed the fully loaded bike across the road up onto the opposite footpath towards a little track leading down the park into a car park. Ron let the bike build up some momentum before dropping the clutch and just like “the worlds fastest Indian” the Princess roared to life. The whole of Faro could probably hear the Princess roaring while Ron happily revved the motor until it was running smoothly as he returned to the hostel to pick me up.

Late yesterday Ron found a little spot tucked in beside a bridge out of the public eye and away from traffic to conduct an oil change. (What a ripoff place the local Honda shop is $70 for oil and a oil filter I was not a happy camper) A lot of stop starts must’ve drained the battery and with new oil things were probably a bit tighter. After a run things should be ok again.

Today’s route took us up through Loule before we took a wrong turn and took the scenic route. The hills north of Loule on the N386 are well used by bikers as all the posts supporting the road barriers have tyres around the bases. This ensures if a rider comes of their bike they’re not going to be wiped out by a post. Smart thinking.

It’s nice country too with lots of hills covered in wild flowers and lots of lovely corners. Ron was in hog heaven thrashing the bike through all the corners leaning it right over however, despite being a seasoned traveler it was too much for me. All the leaning one way then the other I was feeling seasick so a quick tap on Ron’s helmet and we stopped. Ah the relief…. I had visions of throwing up in my helmet, ooh not very nice. 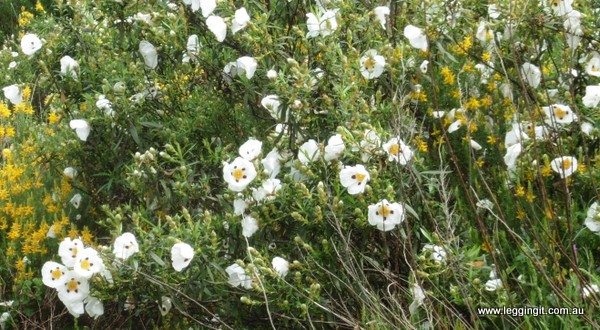 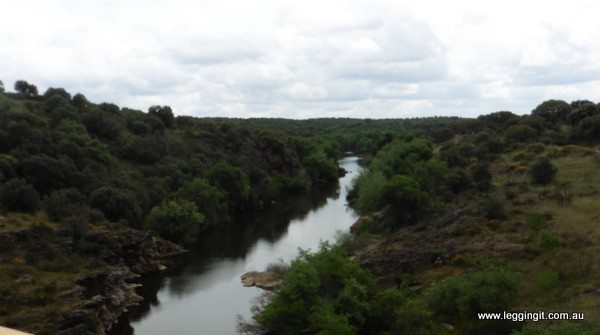 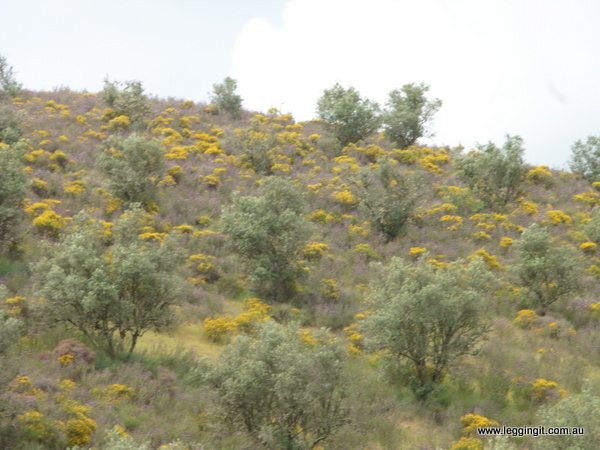 After that the roads were pretty straight so it wasn’t so bad and we happily cruised along. Passing through the different towns we were greeted by carnations in recognition of Carnation Revolution of 25th of April 1974, when a military coup to overthrow dictator Estado Novo turned into a civil resistance movement. The carnations were put into the rifles of the military and an almost bloodless coup removed the dictator, leading eventually to a transference to a democratic country.

We stopped off a few times, firstly at a small village for fuel, where after Ron had filled the bike up the attendant staggered out of the cafe across the road. Later we stopped at a little village for lunch and were blown away by the lunches. We ordered pork and two of the biggest meals arrived and despite our best efforts we couldn’t finish them off. The bill was half of what we were paying elsewhere. Eating at local cafe’s and restaurants especially in the smaller country towns really is a great way of saving a few dollars, while getting a real local experience even if half the time we have no idea what we are ordering. 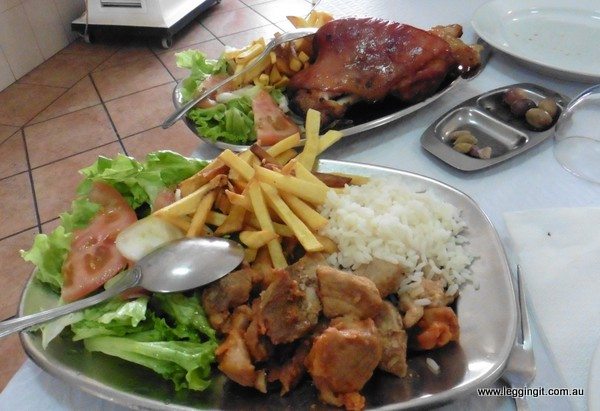 Reguengos de Monsarez or Reguengos to the locals is a farming town with a wine processing plant and grain silos on the hill. There isn’t very much to do in town but we used it as a base to visit the nearby Castles at Monsarez and Mourão. 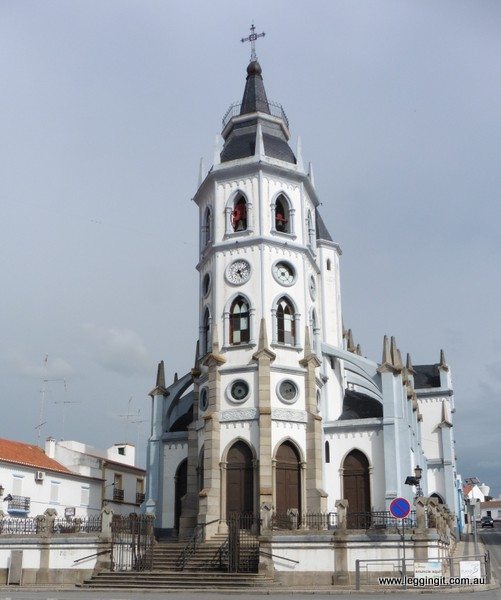 The castle at Mourão is set on a small hill surrounded by a beautiful little village with narrow streets which date back to the Middle Ages. The castle’s been around since the Moors and been reinforced and rebuilt a few times the latest in 1657. The Matriz de Nossa Senhora das Candeias church was also rebuilt at this time. These days the church is the only building which remains and the castle is just an empty shell. The church is still in use with a decent sized congregation of locals using it. 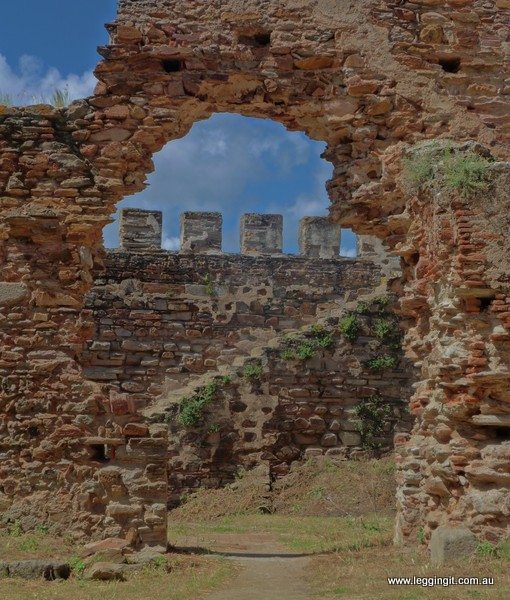 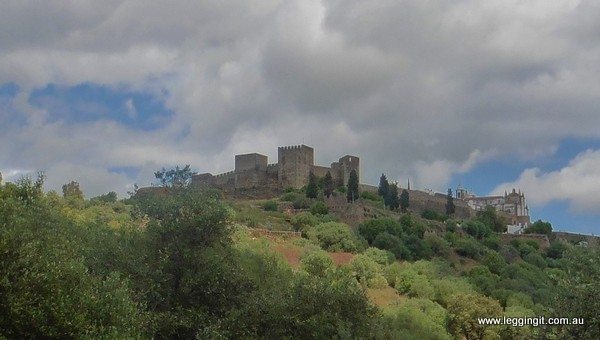 Monsarez Castle sits atop a steep crag with a smaller spur below topped by an old chapel surrounded by houses. The castle is beautiful inside with lovely white washed houses, stunning views of the surrounding farmlands, and in the centre the picturesque church of Nossa Senhora da Lagoa. There’s a few restaurants which take advantage of the views and we stopped at one to try their Hare Pie. We were soon to discover the Hare Pie was high in iron, after I bit into a piece of buckshot. I don’t know if I was unlucky but after swapping meals with Ron, I cannot risk damaging my teeth, he spat out another few pieces of buckshot along with a few pieces of bone. 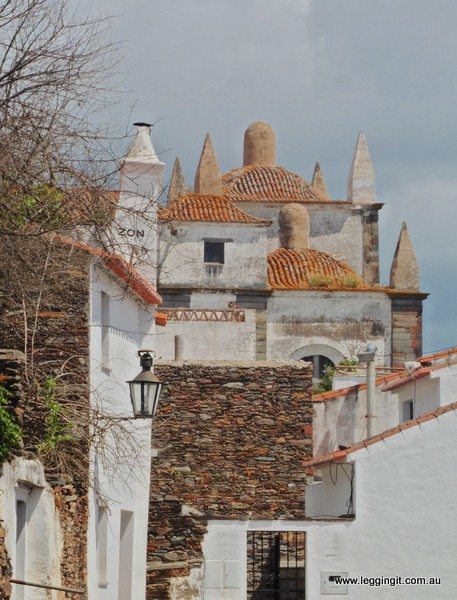 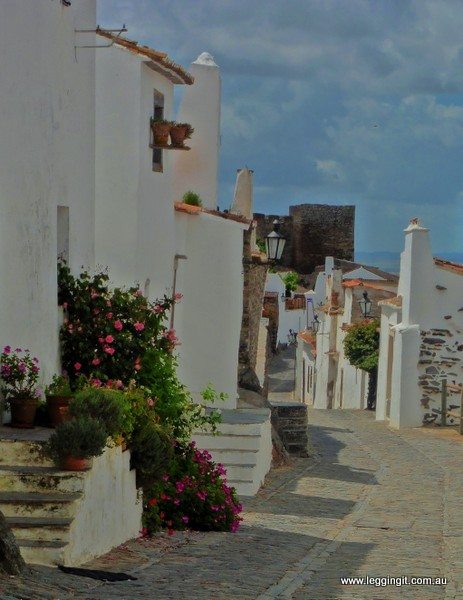 The countryside around Reguengos is pretty scenic with lots of fields filled with pasture, cereal crops, olives, cork, grapes, fields in fallow covered in wildflowers and nearby San Pedro making clay products. The whole area’s been inhabited for over six millennia with standing stones, stone circles, and dolmens still dotted about throughout the countryside, so there’s heaps to see. However, one thing which is quite apparent throughout the country is the large number of abandoned houses. I don’t know whether its because of the corporation of farms where corporations buy up farms and families are moved off but abandoned farmhouses with roofs caved in are quite obvious. Even in the towns there’s beautiful old houses everywhere in the same state. We spoke to one person who said it was due to housing tax.

When we leave Reguengos we’re going to stop at Evora, the home of the Chapel of Bones, before heading on to Lisbon.

One thought on “Reguengos de Monsarez”