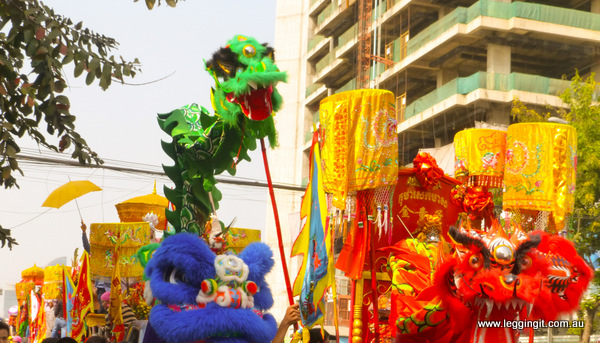 After spending over a week in Phnom Penh tomorrow we could finally leave.

We started the day with a trip to the Bakery at Tous Le Jours and enjoyed a breakfast of croissants, a fan pastry, and an unusual fruit twist.
We decided to check out Koh Dach and  Mekong Island (commonly known as Silk Island) so headed into the riverfront area of the city, across the Japanese friendship bridge and then headed north. We headed up north until we recognised the temple close to the farthest north ferry so turned off the main road past the temple onto the river road. About one km north of the temple was the ferry sign, so we turned down the lane way. The hill was steep and slippery, Michele was voicing her concerns but I just told her to “hang on she’ll be right”.

We drove onto the ferry with every face staring at us. The ferry only took a few minutes, it cost 3,000 Riel,and it was even steeper coming off, but once again with Michele offering to walk up the hill I told her to “hang on she’ll be right” and gunned the throttle.

At the top of the ramp we joined the main road and headed south passing through villages which were pretty rural. We slowly cruised along the road until it turned into a single track and saw a bigger dirt road so followed the track to that and then found a sealed road. As we rode through along the edge of fields people stopped to wave and say hello it was really nice.

As we headed south we passed the two other ferry ramps so made a mental note of which on to come back to. We passed over a metal bridge which links the two islands together, and rode around the smaller island waving to people before heading to a silk weaving community. We met a nice bloke named Narith who was trying to make money guiding people in his spare time from studying English. He’s hoping to support himself and his family and is hoping to go through university. He. showed us around explaining the whole breeding process for the silkworms and grading of raw silk  before explaining how the looms work. It was really fine quality silk the ladies were weaving and they were so friendly. We stopped for a drink and chat with Narith before bidding him goodbye and good luck with his studies.
We headed back to the southern most ferry and crossed the river, but this time the fare was only 2,000 Riel.
We meandered through the bottom end of the isle between the Mekong and Tonlé Sap with its riverside restaurants chockas  with Lexus’s and Mercedes, Hair Salons, and clothing shops before making our way back over the bridge and back to the riverfront area again.
We decided to return to Grand Riverview restaurant where I had a fiery Spicy Khmer Salad and Michele a Steak Sandwich which was nothing like she expected and was blown away by the flavours and presentation. It was two great meals a little bit expensive but the restaurant was top class with excellent staff who were extremely attentive, watching the tables, ready to serve.
We returned back to the hotel but on the way the banging of gongs and drums made us take a detour. The Chinese were at it again, but this time with a number of trucks transporting different people dressed as godlike characters, in the finest silk.  There were people running about selling blessing papers, flags and bracelets. We couldn’t find anyone speaking English to explain who the characters were but we belived they were gods to bestow wealth, good health, prosperity called Fuk Luk Sau. The trucks stopped and the gods and their assistants dismounted. One assistant was spitting water on the ground in front of his god while another was throwing rice in front of his. The gods were all striding with great sense of purpose and there was even an old lady dressed as a goddess, whom we believe is the goddess of mercy. The gods performed their blessings and climbed back on the trucks and the convoy continued on.

We headed back for a swim but the pool was very crowded with local kids cooling off so decided not to worry, we then headed back into town to drop of the bike and get our passports. We were not feeling too positive after Tuesday’s attempt to retrieve them but we very relieved to have them in our hot little hands. Checking the visas, one was issued on the 6th and one on the 7th so we are still quite miffed at why it took till the 14th to get them back.

We then wandered down to try and get a bus ticket to Kep, after our bus from Battambang, we wanted to make sure we definitely had seats so oped for the VIP bus we handed over the princely sum of $14US and leave tomorrow at 12,45pm.

Then it was time for our special Valentines Dinner.

When was the last time you really felt the texture and tasted your food. We had an unusual dining experience at Dining in the Dark. Just on dark we were greeted by the friendly staff who kindly removed our phones, watch and camera. We were escorted up the staircase, through the thick blackout curtains through the darkened room to our table by the beautiful blind hostess, Honey.

It was so dark we couldn’t see a hand in front of our faces, we just had to trust Honey and the other staff. Honey seated us at our table and guided our hands to where our cutlery, drinks and plates were. The first course was served and I wasn’t sure whether to try and use a knife and fork and risk stabbing myself but settled on starting with my fingers and go from there. Because we couldn’t see our food we couldn’t tell what it was until we tasted it. I picked up something soft and pillowy, put it into my mouth and started chewing. My brain was trying to work out what it was, soft outside crunchy inside. As we’d finish a course we could hear Honeys heels clicking along the floor approaching our table. As we were early we were alone in the dining room for the first few courses, before we could hear Honeys sweet voice in the dark as she lead people to their tables.

As people came in we were guessing how many people were in the dining room and where they were from. As we would finish our courses Honey and another waiter, Freydo’s,voices would drift from the darkness asking to clear our plates and if they could refill our glasses. We couldn’t see a thing but it was so wonderful discovering the food. The meals were magnificent and as we’d spoon something into our mouths we were busy trying to work out what it was. We enjoyed five courses and by using touch would pass across the table  to each other special parts of our meals for each other to try.

We sat and chatted for a long while and then asked Baby to escort us back down the stairs. We said our goodbyes to Honey and were escorted back to the kitchen where we were shown the meals we had eaten. They were really great looking meals, I had the vegetarian set and Michele the international as we originallly had plans of sharing our meals but of course it was too dark .lol . We were “oh-ing” and “ah of coursing” as the meals were explained to us. We were also presented with roses for Valentines day,  it just capped off a truly memorable dining experience. If you are ever in Phnom Penh please try it, it not only is an amazing experience but also gives these young visually impaired workers employment although most are studying at university. Details are here normally it is $18 per person for 3 courses but as it was a special night it was $25 for 5 courses, a glass of champagne and we also got a rose each.

After a walk along the riverfront past all the young lovers enjoying Valentines Day we caught a Tuk Tuk back to the hotel. The Tuk Tuk driver was really slow and it was a really enjoyable ride, chatting as we slowly wound our way through the ratrace traffic, with everyone else acting like they should have been somewhere ten minutes ago. As we drew close to the hotel we started talking to some locals in another Tuk Tuk when they saw Michele had roses. We asked if they got flowers for Valentines Day to which they replied no. We started teasing a guy sitting in the front seat with one of the ladies why he didn’t buy flowers, and he replied she’s my friend. We decided to give the roses to the two ladies so as our Tuk Tuk  caught up we passed the flowers to them. The two ladies were still blushing as we took our turn off to the hotel. It was a lovely way to end the day and our time in Phnom Penh

Tomorrow we are taking the bus to Kep (finally)