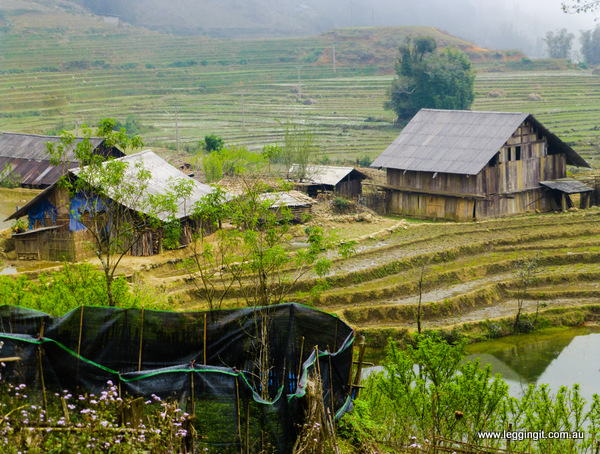 After breakfast on our first day in Sapa,we checked the map and headed down the hill at Fangsipang Street to Cat Cat Village. Cat Cat is a Black Hmong village within easy walking distance from Sapa probably only 1 km at most. Entry into the village was 40,000 VND each and we slowly rode down the steep hill. The road was a little rough, the potholes had been filled with some wet concrete today which hadn’t completely set.

At the second checkpoint we had to park the bike at a cost of 10,000 VND. From here we were directed down the hundreds of stairs past dozens of stalls selling locally made cloth, silver, harps, toys, bags. As we were taking photos of the terraces, a couple walked past, and the women was eating a chocolate bar. suddenly five little vietnamese boys who were happily playing nearby descended on them hands outstretched crying out “haiby”. The lady didn’t know what to do as she was surrounded. She reahed into her hamdbag and started handing out wrapped Lollies. One of the littler ones was a con artist she gave him a lollie and he put it into his pocket and had his hand straight back out, begging for more. We slowly walked down the hill past houses made from timber slabs. The cutest little baby Vietnamese pigs were all snuggled together next to one of the houses all fed and trying to stay warm while they snoozed.
All the hillside was terraced, and there was no shortage of water coming out of the side of the hill it was directed into drains and then into bamboo gutters which fed water powered rice stamps. The water from the drain fills the bucket on one end and once it’s full it see saws lifting the stamp head, the water drains out of the bucket and the stamp falls back to ground. The water’s then diverted to the next stamp. It’s very ingenious.  The clothes selling in the village are all made locally. While the women are waiting for customers they split the hemp and roll it into string and make it into balls  ready for weaving. They also stitch different pieces using brightly coloured wool with designs passed from one generation to the next. There was an old mud brick house half way down the hill,made in the old style with wooden shingle roof. It really has a rustic feel about it. We stopped for coffee and apple wine. The apple wine was in a clear plastic barrel with a tap on the front on a shelf exposed to the elements with a few small teacups hanging from hooks. The barrel contained about 100 shrunken apples with a tea coloured liquid on top. The apple wine was quite sweet, apple flavoured with a medicinal after taste. We used the old adage from Zombieland “One and done”.
The bloke running the cafe was busy below at his still in the early stages of making “rice wine” but was having trouble with his fire as it was too hot so was furiously adding cold water and removing hot water in an attempt to get the temperature right.
Michele stopped to ask a girl about her design she was stitching and she showed Michele her stitching pattern. The girl uses no stitching chart it’s all in her head.
Down at the bottom of the hill, there was a small creek which powers a hydroelectric plant, providing power for the village. There was a cafe and a couple of local eateries and a few ladies trying to sell postcards, Hmong mouth harps, and other things we didn’t need.

One lovely lady named Sa kept showing me things saying “you buy?” To which I instantly replied “No thanks” in one fluid motion before she had a chance to finish. Eventually she just cracked out the biggest smile and we just talked. It was nice to get past the “You Buy” and just be two people talking. There were a lot of Hmong ladies young and old who were quiet happy to chat and have a laugh. They really are beautiful warm people who do it pretty tough.

We said goodbye and followed the pathway along the creek. The pathway led to steps and eventually a drink stop came in sight (actually it wasn’t very far at all) two motorbike taxi riders enticed us with promises of a return to the top of the hill without any more climbing. The price of 80,000 for two bikes sounded ok to Michele so she agreed. After a cup of freshly squeezed sugarcane juice we were ready for the ride but to Michele’s dismay it was from the other side of the creek across a suspension bridge.

Michele went on the back of the older blokes bike and I jumped on with the young bloke. The road back up was pretty steep but the little Honda’s handled it pretty well and I just sat on the back snapping photos. They dropped us up past the bike park so I walked back and got the little Yamaha and motored up the hill picking up Michele just at the bottom of the restaurant which is in an awesome location overlooking the village below (when it is not foggy of course).
The road was so steep that the gutless little auto wouldn’t go and Michele had to bail a couple of times. If the jerk at the hotel had organised a manual motorbike as I had asked we wouldn’t have had any problems. Unfortunately after that Michele was scared the bike wouldn’t make it up the hill and affected the rest of our travels. Getting a bike through the hotel can be handy but we’ve also found that the bikes can also be pieces of junk, like this one and our bike in Kep.

Realising that very soon European food would be fairly inaccessible we decided on Croque Monsieur (although I would’ve called it a ham and cheese jaffle) and a baguette. While we sat at the cafe we chatted to young Hmong girls who were taking a break. They told us a bit about themselves and we all cracked a few wisecracks, they really have a great sense of humour. One even asking us to take her baby back to Australia but only for 15 years then we could bring him back, not sure what she would have done if we had agreed.

Around Sapa there are lots of villages so we decided to have a look out the road past our hotel.The weather had been sunny but the further out the road we got the fog got heavier. We zoomed past a pay point but at the second check point we were stopped and sent back to pay 40,000 VND. As usual as soon as we’ve paid to use a road, it immediately deteriorates and it did. The road was pretty steep and Michele was pretty concerned about it but I had confidence we’d get back up. We passed one village and Michele said no way the road was too steep. We continued on and on a clear day the view would’ve been absolutely amazing but even with the fog it was still really nice.

Eventually we decided to turn back and with the throttle on the stops we motored up the rugged roads with Michele occasionally cursing the potholes but eventually we made it back to town without her having to get off and walk.

More European food with Michele having a Cappriciosa Pizza and I a Ham Cheese and tomato Pizza. We also chatted with two Aussies from Sydney we’d seen down at Cat Cat village who were on their way to Halong Bay next. We hoped for fog free weather for them.

While we ate I watched a young Hmong boy with his baby brother strapped to his back rolling out a mat and placing his wares on it for sale. As people would approach he’d shine his torch on his goods. A few people stopped, but I thought what a hard life for these people, as it was quite cold, how blessed are we that we are born in the right place at the right time. Are we any happier? Well, that’s a personal choice as happiness comes from within. These people have barely anything, but seem happy. Maybe it’s that human condition. Within a village you all struggle together. Theres always support from those around you.

The hotel were quick to get the keys of the bike back that night even though we had booked it for two days, and overall we couldn’t recommend the hotel because it had a few failings. The towels weren’t changed after the first day, the washing was returned wet after two days (it’d been drying up on the roof) and it was mixed up with other people’s clothes, they had a visa sign on the door but when we went to use a card the machine wasn’t working. As they say you live and learn.