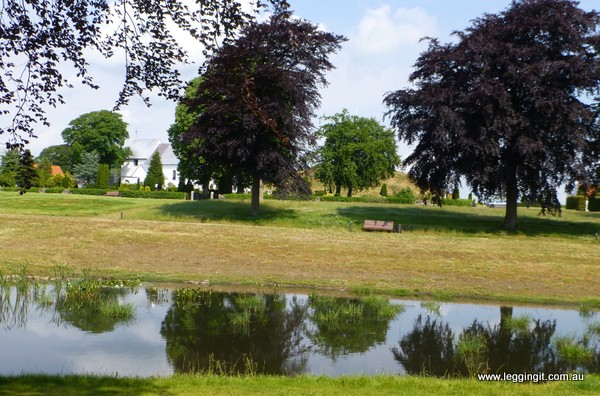 We took a ride up to Jelling a nice little town and the baptismal place of Denmark. This is the first place where the word Denmark is written.

Not far from the train station is a simple complex surrounded by white painted timbers cut at an angle which represent the palisade which was there 1000 years before.

Inside the palisade are two large burial mounds which date from pre-Christian times. Between the two mounds is the oldest church in Denmark the original church was made of wood and erected in 995 and it and two other replacement wooden churches burnt down. The current church dates from around 1100. The church is quite simple inside with whitewashed walls, however there is still evidence of its original murals on the wall near the organ. The floor is decorated in lightning bolt designs which match some of the stain glass windows. The window behind the altar is orange and bathes the altar and floor in a golden glow. It really brings the floor design to life. Beneath the floor lies the body of Harald Bluetooth the location marked with a silver lightning bolt.

Outside the church two standing stones over 1000 years old decorated with runes, one of which has the earliest depiction of christ. The significance of the stones are that the larger of the two was raised by Harald Bluetooth, King Gorms son, in memory of his parents. It celebrated his conquest of Denmark and Norway, and his conversion of the Danes to Christianity. Denmark appears as the word “tanmaurk”. With the picture of Jesus on one side and describing the country as Denmark the stone is seen as a baptismal symbol.

The other stone is much older and was raised by King Gorm the Old in memory of his wife Thyra. It uses the word “tanmarkar”danmarkar to describe her. Another fascinating fact is beneath the two mounds, the stones and the church is a stone ship. The largest in the world about 350 metres long. Today the outline of the ship is marked by concrete slabs about 1 metre by 2 metres.

A number of buildings which were originally inside the palisade are also marked by concrete slabs.

Nearby to the complex is a museum which is currently undergoing renovations but it has a nice little cafe and a cool gift shop for all your Viking needs. It also has copies of the two stones which are outside the church. They are carved from similar material however unlike the other stones they are painted and represent the way the stones would have looked originally. They are really stunning.

On the way home we passed Om Jelling (Jelling Lake) where a Viking ship is currently moored. It looks quite stunning. Annually a ship is built and rowed across the lake and dragged ashore where it is burnt as part of celebrations.

The ride through the surrounding countryside is quite magical with fields of young corn, barley and golden wheat. Some of the wheat is in transition so there are green and golds blended together. There are forests of beech, oak and spruce so the countryside has all shades of greens. There’s beautiful old white washed houses with thatched roofs and crossed wood holding down the ridgecap. Denmark is a quite magical place.