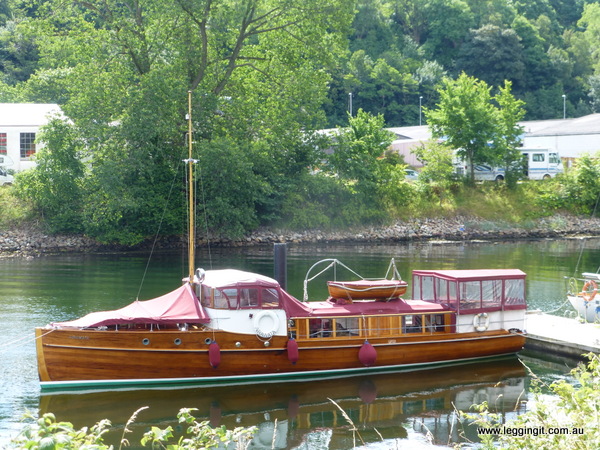 Up early this morning with the bike packed and ready by 7 o’clock. We said goodbye to our hosts thanking them for a great stay in Kiel. We then started on the road to Denmark.

As the sun was coming up it was looking like it was going to be a cracker of a day. Chrissy satnav for some reason took us via whoop whoop but as we crossed over the canal it was interesting seeing a van with ship spotters de on the back and a guy with a huge telephoto lens taking photos of ships. They’re sort of like train spotters for ships.
The satnav was programmed to avoid freeways so it was a nice run up along the bays surrounding Eschtonacht. Along the way we spotted a few old houses with thatched roofs, and a old inns.

We were catching up with a Couchsurfing mate in Flensburg and it was a beautiful sunny day as we cruised along the waterfront. The satnav took us to the wrong location but after a phone call he soon found us and we headed for his place. He’d gone a bit overboard organising breakfast with all sorts of nice things to eat. We had a good catch up as we hadn’t seen him for a few years since he was our home. We sat there enjoying the sun overlooking the waterfront until we felt a drop of rain. Michele had been tempting the weather god and now he was upset. The sunny day as it was quickly replaced by lots of rain. We retired indoors magging about all sorts of things and quickly half the day was gone.

We stopped at the bike shop to pick up a waterproof jacket for Michele but as we headed for the door it started raining and hailing. We waited for the hail to stop and headed off to Denmark. With 1 kilometre to go to the Danish border we were dumped upon by hail. We stopped under a bridge until it passed but no sooner were we back on the road then it started again. We just tucked our chins in as the rain just bucketed down. It was too much for my pants which soon started leaking and before long my nether regions were soaked in icy cold water (not fun) The old bike had a touring screen which diverted most of the water but the Princess doesn’t.

The next stop was a servo and as I tried to cut across their lawn the princess started sinking and almost got bogged. Luckily Michele was there to push her back onto the road but there were a few moments when we thought we were stuck. We wandered around inside the servo leaving little pools of water and thought about having a cuppa to warm up but we had no Danish Krona.

Eventually after the hail had stopped we climbed back aboard the princess and headed on. The rain finally eased off as we neared Christianfeld, which we’d heard was a beautiful village so we took a drive through. There was road works in the Main Street which was annoying but we spotted a coffee house. We ordered coffee, honey cakes and a florentina. Decadent yeh but we felt pretty good after the sweet treats.
We dried out a bit before heading on to our destination.

The rain returned on and off along the way and we were so glad when we saw a friendly face and a hand waving as we approached our couchsurf.

The princess was parked up for the night, and we got all our wet gear dried off. After an amazing traditional Danish meal of meatballs and potatoes our hosts told us of a few places worth checking out nearby including the birthplace of Denmark. Tomorrow we’ll check them out.