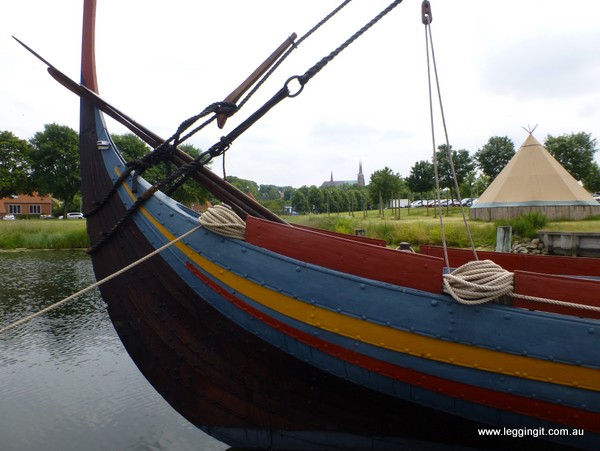 After a leisurely breakfast which involved converting our host to a vegemite fan we were rumbling down the driveway 30 minutes later than planned. We really enjoyed our two days in Kolding with our Couchsurfing hosts teaching them a little Australian culture and learning some Danish culture from them. It was a tear filled occasion when it came to leaving which I suppose is the reaction from staying with really nice people.

After fuelling up at the corner store our host showed us the shortcut to the motorway through the back roads. Once again we shook hands and waved goodbye then gunned the bike towards the turnoff.

Expecting a deluge we wore our rain gear but as usual if you wear it, it doesn’t rain but the minute it’s packed away old Huey starts sending it down.

The countryside was really beautiful with lots of green grassy fields, fields of barley, and golden wheat. The housing is quite different to Germany with lots of one level bungalows and the occasional white plastered house with attic hutch, thatched roof with timber crosses over the ridge cap. Most of the houses are also surrounded by hedges.

We crossed over the Storebæltsforbindelsen or Fixed Belt Bridge which crosses the sea between. The first part of the bridge connects to a small island which contains a lighthouse and a small rest stop and the second bridge is massive with high girders and cables curving down. Unfortunately bikes have to pay a toll and the 125 Danish Kroner was pretty steep.

We continued on to Rosskilde where we stopped at the local market square. It was market day and the square was filled with stalls selling all sorts of goods, fruit and vegetables. There were also a few trucks parked there with signs painted on sheets draped over the sides announcing to the world that the school leavers were aboard. The local tradition is for leavers to wear their leavers hats (Black caps for all the genius’s and White caps with a tiny black brim and chin strap for all the other students) The trucks pay a visit to every students house where their proud parents ply them with food and alcohol. Later whilst we stopped for coffee at the bay a few of them were skinny dipping off the wharf whilst proud locals watched on reliving their final day at school.

We visited the Catholic Dom but as it had an entrance fee of $10 we decided to skip it, only later we discovered why all the Danish Kings and Queens a buried there.

We headed to the Viking Ship Museum (Vikingeskibs-museet) which houses 5 ships discovered in 1963 and retrieved from the harbour. They’d been sunk 1000 years ago in the channel to block the harbour during a raid by other Vikings. These days the remains of the different ships have been pieced together and mounted inside a steel frame work to represent their former shape and size. Apart from the display of these artefacts the museum has many buildings and staff busy building new ships, including new rigging.

All the ships on the blocks are being crafted using the old techniques which includes splitting the timbers using axes and wedges. The timbers are further split using axes before being finished using broad axes. We watched as craftsmen were shaping timbers for a small launch.

Inside the museum there was an experiment which involved a lady weaving wool on a loom to make a new sail it looked pretty slow and tedious work but the cloth looked really hard wearing.

There was also a Viking ship tour where for $18 you get to row a Viking ship. The small ships they used were quite light and manoeuvrable. We watched as one with only 4 people aboard easily rowed it around the bay before coming into the boat harbour and manoeuvred it about. There were also guided tours which friendly experienced guides which looked pretty good.

There were all sorts of boats ranging from the late 1800’s until the present which were on display and still in use. One was a recreation of one of the Viking ships housed in the museum which had been sailed to Ireland and back.

Overall the museum was a great visit with lots of old artefacts but lots of interesting hands on experiences.

The ride around the Roskilde Fjord was quite spectacular with the grey skies overhead. We cut through some of the Danish countryside down twisty winding roads through fields of rapeseed, wheat, barley which was quite beautiful.

We arrived in Helsingor late in the afternoon to couchsurf with motorcycle enthusiasts……sweet.