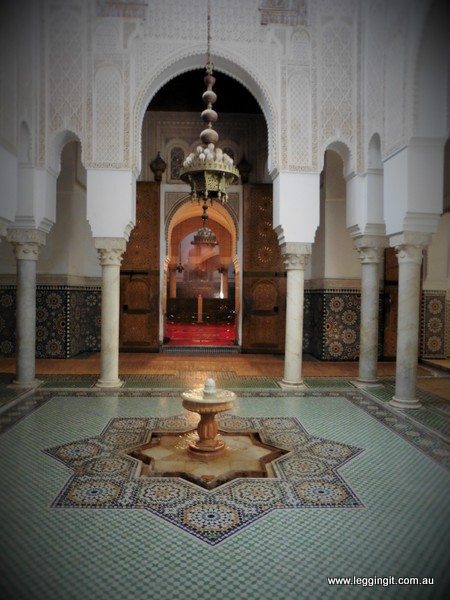 Well what to do in Meknes?

The Gate of Bab Mansour is the remaining most decorated gate through the walls.

The Tomb of Moulay Ismael is a tranquil resting place of one of the former rulers. Unlike the massive mausoleum for Mohamed V in Rabat, this tomb is on a smaller scale without all the ostentatiousness.

Musee Dar Jamai which is set in a former mansion, is quite well maintained and furnished unlike a lot of other old mansions. It houses a small collection of personal items, art, clothing, jewellery and is quite interesting.

Prison de Kara where 60,000 prisoners were imprisoned every night, chained so that they slept standing up. Their only glimpse of sunlight coming through the small ventilation holes high above. It’s hard to imagine the fetid conditions which the prisoners endured.

Madrasa Bou Inania a former Islamic school based in an old two storey Riad. The school had seen better days with the fountain in the middle of the courtyard having been crudely repaired so many times that it is no longer functional. The plastered walls showing signs of water damage and threateningly collapse. For the standard 10 dirham entry fee you wonder whether they spend any money at all on the upkeep.

Place El Hedhim Place Lahdim the large open air area is unlike the big square in Marrakech firstly in actual size and secondly in tempo. On the weekend it’s a little lively with the usual snake charmers, horse rides, dancers, the fishing game.
Bab Mansour the large city gate opens to a small art exhibition by local impaired artists. Interesting but luckily it’s free because it really is tiny.

Volubilis, the roman city is only thirty kilometres away with CTM buses, taxis and local tour operators offering transport. It’s a nice ride out brought lovely countryside. These days there’s a reconstructed archway, a number of columns, and parts of buildings still standing along with various mosaics. Unfortunately an earthquake in the 1700’s levelled a lot of the buildings.

Whilst we were at Volubilis, I became the victim of a vicious Cat attack. Whilst talking to a few families from Down Under (NZ and Australia) we’d met, a cat decided to take a rest out of the sun in my shadow. With all those palm trees you’d think that’d be the most logical place to rest, but not for this cat. Unfortunately when I moved my foot I stood on the cats tail, which the cat took offence too driving its claws deep into my ankle. Ron and the ladies performed a bit of first aid and stemmed the flow of blood. Luckily I’ve had all my shots and the cat wasn’t foaming at the mouth so I’m sure it didn’t have rabies.

After a few relaxing days in Meknes it was time to head to Fes in time for the storytellers at the Clock Café.