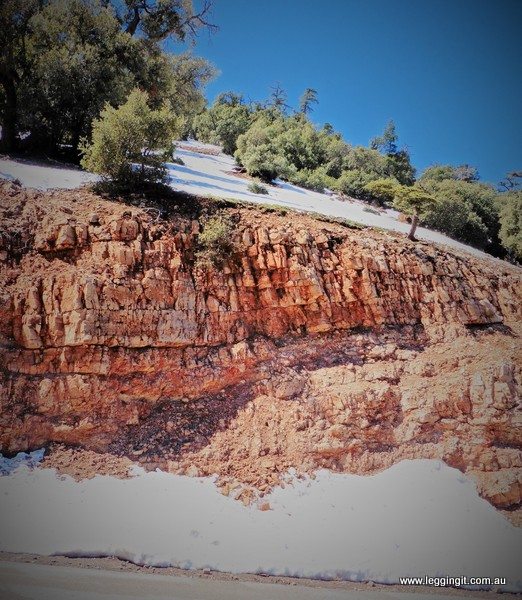 Today we put the new tyre to the test on the ride from Midelt to Meknes. The ride took us up over the Atlas Mountains. Nearly every day we comment about the landscapes of Morocco but the contrast between south and north of the Atlas has to be seen to be believed.

Passing through little towns always reminds us of the simplicity of life. Old men sitting in small groups in a sunny spot or sitting over an endless cup of tea in a local cafe. Women bent over as they scavenge for fodder in the fields for their animals or in small groups at the community washing stand chatting with their kids playing nearby.

South of the Atlas the landscape is dry and barren but as we entered the foothills there was a bit of snow laying about. As we continued our climb there was snow on either side of the road and as we climbed higher we were amazed by forests. It was like a Christmas scene with beautiful pine trees surrounded by a blanket of snow. About 4 days ago there was a bit of snow around the mountains but the snow-ploughs had been through and cleared the thick patches of snow from the road. The constant sunshine had melted any remaining snow on the road so it was a nice ride. 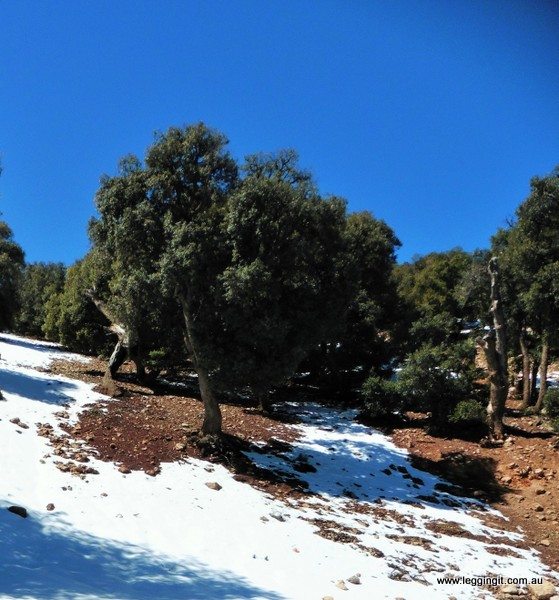 The snow covered lots of the open farmland and flocks of grubby sheep greedily munched on the small patches of green like swarms of locusts devouring everything in sight.

At Azrou we were surprised with Morocco’s version of the Alps. Brightly painted toboggans lined the road, locals played in the snow, or posed for photos with horses or the snowman. Alpine style lodges and a beautiful cedar forest with Barbary apes lining up for food and photos.

Descending into Meknes we passed through a few towns which really looked out of place. The flat roofs were nowhere to be seen as everywhere sloped roofs dominated the landscape. It was obvious that there was a lot of money this side of the hill. The landscape also was rich and fertile, with all sorts of fruit trees, and vegetables growing. It looked like the sort of place where if you dropped a paddle pop stick a whole forest would grow.

Once again the Riad we booked into was inside the medina so we had to park the bike elsewhere, which wasn’t really a big drama. Ron simply rode the bike through the plaza and down through the little alleyways to the front door of the Riad, dropped off the luggage and then took the bike to the car-park.

Morocco really is a land with a little of something for everyone. For people interested in hiking and the outdoors there’s plenty of great tours in the Desert, Atlas and Rif Mountains. There’s Camel and horse treks, off-roading in 4wd’s, quad bikes, dune buggys, and dirt bikes. For old vehicle buffs like Ron, there’s plenty of old Bedford and Berliet trucks still lumbering down country roads, old Mercs, Citroens, Peugeots, 80’s model Opel Rekord (like the old VB Holden Commodores), farm machinery and all sorts of mopeds, scooters.

Also with the country’s dependence on horses and donkeys, there’s a glimpse into our not so distant past. Market day is another example of living history, with all the stall set up like they have for hundreds of years..

There’s lots of little places off the tourist map for those who want to get away from it all and in your face cities like Marrakech where life happens at full volume.