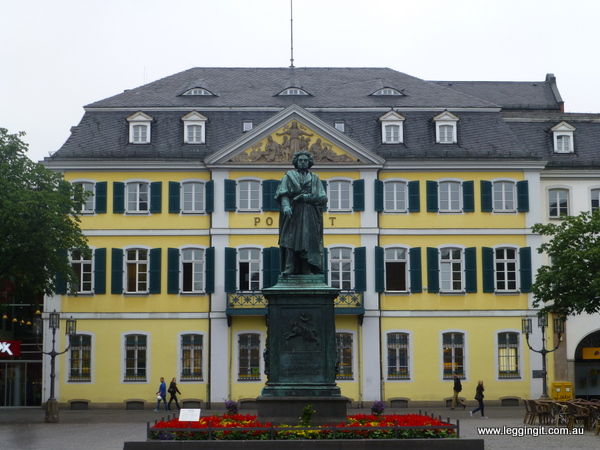 After a night of tossing and turning, checking every few hours out the window to ensure the “Princess” was still there we left the hostel at about 7am.

We headed in to the centre of Bonn to have a look around. Surprisingly enough to most people( including Michele) Bonn was the former capital of West Germany until Berlin became capital of unified Germany in the 90’s. However Bonn looks like a laid back town with lots of young people.

After a forgettable breakfast we checked out the Bonn Minster. The Minster is built over the graves of two roman soldiers Cassius and Florentius who were beheaded for being Christians, they’re also the patron saints of the city. There are two large sculptured roman heads outside the church representing the two of them. The interior of the minster has stunning stained glass windows and is magnificent.

We took the A road from Bonn to Koln (Cologne) passing through lots of little villages and farmland. It’s strawberry and white asparagus season so small stalls were set up along the road side selling them freshly picked and the air was filled with the smell of strawberries.

The sun was sparkling as we arrived in Cologne and we checked out the Dom. The last time we were here during Christmas the cathedral was surrounded by the Christmas markets but now the place was just filled with people enjoying the sun. We had a look inside the Dom and it was amazing how different it looked with different lights treating through the windows. We were so glad we revisited it.

We returned to our little cafe but since we were here last they’d done a few renovations
so it was not the same. The food was good though and we enjoyed a lunch of Jaeger Schnitzel.

After getting a little lost getting out of Cologne we hit the motorway and headed on towards Münster. Michele much prefers slowly cruising along country roads than barrelling down the motorway like “Burt Munroe in Worlds Fastest Indian”.

Arriving in Münster we parked the bike then stopped for coffee and an amazing chocolate cake. Münster was obliterated during the war but has been rebuilt in the old style recapturing the charm of the city. It is a bicycle riding university city and I sure hope they’re better at studying than bike riding. The centre of the city has a large vehicle free zone and it’s chaos being a pedestrian out for a quiet stroll as bikes zip past.

The Münster Dom is a beautifully rebuilt cathedral with a massive statue of St Christopher which confronts you as you enter the church. Again lots of beautiful glass windows. They also have an amazing astronomical clock, designed in the 16th century and still accurate today. The Dom has a ragged history as through the reformation they put 3 men who protested against the Catholic Church into metal boxes and hung them off the spire to remind everyone to behave.

We met a few Kiwis outside the church and it was interesting hearing a familiar “ekksent” again. We walked around the city for a while checking out the market squares and beautiful buildings dodging insane university addled bike riders.

Our B&B was about 50 km’s away in Arhaus, not far from the Dutch Border so we enjoyed a nice ride through the countryside. Expecting a little village we were quite surprised how big a town it was, and how beautiful. The B&B was in a nice little street and had a beautifully manicured cottage garden. We were warmly welcomed and after a bite to eat settled down for the night.

Tomorrow Bremen and catch up with friends.