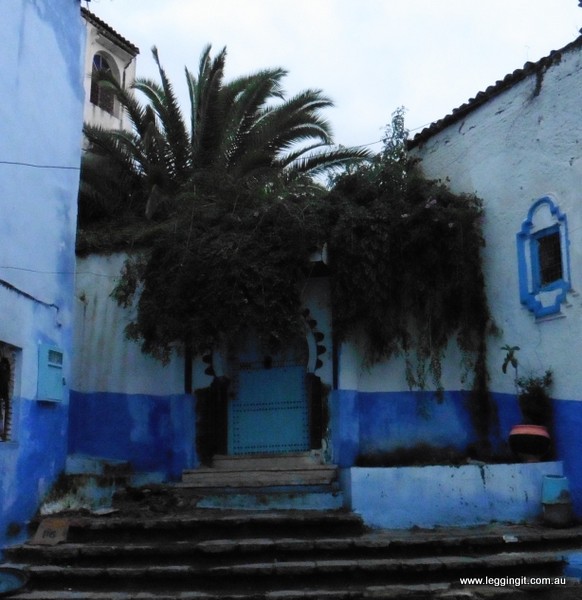 We made the decision to leave Tangiers before breakfast, head to Chefchaouen, a small city known for it’s blue buildings. We booked 3 nights at Dar Dalia a small hotel at a really reasonable price.The weather forecast is for fine weather today, last nights showers have passed so all was looking good.

When we climbed he stairs to the rooftop lounge we realised we may have been a bit hasty about the weather. Just because the forecast doesn’t say rain it doesn’t mean its not gonna rain. judging by the clouds surrounding us wed better wear rain gear.

After breakfast the bags were packed in record time and pretty soon we were saying goodbye to the friendly staff at Dar Rif and loaded up on the motorcycle. We handed over our cash to the carpark guy at the Continental and soon we were slowly creeping down through the narrow cobblestone streets of the medina. Google maps led us out onto the road we’d come in when we arrived and we waved as we passed the toll gates which this time we skirted around on our way out.

The signposts were quite easy to navigate by, with us heading down the N2 towards Tetouan. Google was put onto standby and the map on the tank bag got the occasional glance to check whether we were on course. The road was a little rough in spots and the traffic coming out of the city a bit heavy but we got through ok.

As we climbed into the hills surrounding Tangiers it was so frosty we were glad to wearing our rain gear this morning. The countryside was quite surprising with lush green hills, not what Ron imagined of Morocco at all. There were lots of small farms plots and whitewashed square roofed houses. The donkeys were quite surprising however. We both knew about them and expected them but when we saw them all laden with goods we were taken by surprise.

Riding into Tetouan, Ron was looking for the turn off road to Chefchaouen as on the map it looked to be before the town. We soon found a road but Ron was skeptical as the wording didn’t seem right as if we were going the long way. A few km’s out of town we spotted the sea and knew for sure we were heading down the coast and were unsure about the condition of the connecting road. With rain likely it was better to stick with the major road than get stuck on some goat track.

As we headed back the way we came sure enough we spotted the turn off. It was at the roundabout where I’d made a comment to Ron about the power line hanging between two beautifully painted towers which flanked the road. As we were both looking up we missed the sign completely.

The road from Tetouan to Chefchaouen was a little rough and winding as it passed up through the granite topped mountains. We contemplated stopping along the way as the scenery was quite stunning. With dark low clouds menacing us we didn’t want to be stuck trying to find the accommodation in the rain so we pushed on. A friend of Ron’s had warned him of some of the roads around Chefchaouen being like polished tabletops and deadly in the wet so we were extra careful. Sure enough as we approached the outskirts of town the Tarmac took on a beautiful smooth finish as if it had been finished off by the plasterers Ron worked with at Central Systems. However, the road builders had made one small flaw to make Tarmac work the stones need to stick out.

Entering Chefchaouen my hands were nearly frozen off trying to use google maps to find the hotel. Sure enough it sent us down a little side street with people telling us this is a dead end……. in Arabic hmmmm yep that pile of dirt at the end of the street confirms that. Eventually a few locals came over and pointed us in the wrong direction, however it was nice to see them help. Eventually after taking their directions we decided to turn around and go back up a road that Ron had spotted.

Once again google maps decided to take a break just at the wrong moment. Just when we thought we’d never find it a nice man wandered over and gave us directions. They were perfect don’t take the first right take the second right, follow it past the school with the olive tree out the front. He happily welcomed us to Morocco and wandered off down the road. Soon we were parked up and lugging our gear up to the room in the one storey guesthouse. Wow what a great place.

Over a pot of Moroccan tea we were shown the map and told of things to see in town. Soon we were wandering down through he streets admiring the houses all painted in shades of blue. It was awesome. About 5 minutes walk from the guesthouse is the Kasbah (castle) which these days has a great colourful kids playground in front of.

After a cheap 3 course meal at a local restaurant watched over by a hungry cat, set us back $11. Soon it was time to get out of the cold and head back to the guesthouse. Tomorrow we’ll check out some of the sites close to town.