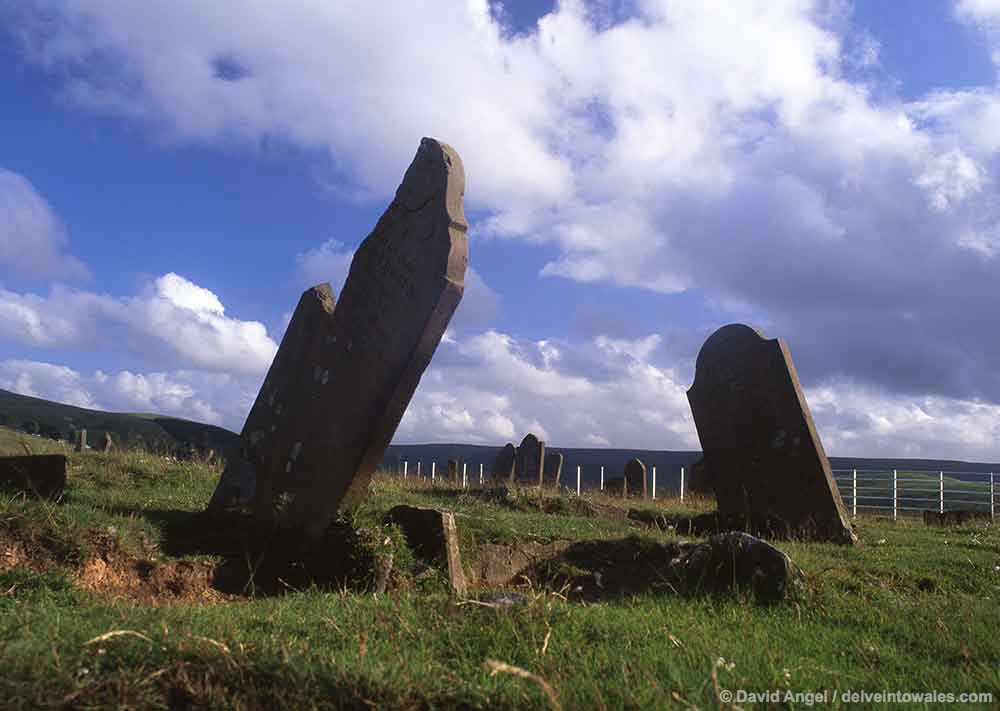 Our latest Guest Post from David from Delve In To Wales  is about a cholera cemetery in Wales. I hope you find it as fascinating as I do.

Cefn Golau is Welsh for ‘ridge of light’. There are many such places in this part of Wales, empty, treeless moorland regularly drenched by rain from the Atlantic, lashed by wild westerly winds.

This is the northern end of the South Wales Valleys, the former industrial region that was once the most prolific producer of coal in the world. To the north lie the sandstone ridges of the Brecon Beacons, a mountain range which you can see if you climb a short distance up the hill behind, Mynydd Bedwellte.

The landscape of these valleys was shaped by rivers rising in the Beacons, carving their journey through hilly terrain south to the sea. In autumn and winter you can wait days for it, but out of the bleakness comes beauty, as rays of light flicker and dance along the top of these ridges, often all too fleetingly.

Barely a soul lives up here, but an unknown number, believed to be at least two hundred, have rested here since the 19th century, left in this lonely place. Nobody has joined them since 1866. Around twenty-five gravestones now remain, in various states of repair, some with their inscriptions still legible. Occasionally a few sheep might wander in if someone leaves the gate open or part of the fence gives way. A larger cemetery is close by, off the road into the nearest town, Tredegar, but the souls in this tiny graveyard were excluded from there because of the disease that took them: cholera.

Cefn Golau Cholera Cemetery is a very rare survival in the UK and a poignant reminder of the poverty and conditions in which many workers lived after the Industrial Revolution. Several cholera epidemics swept through Britain in the 19th century, the worst of which was in 1832-33, 1849 and 1866, each killing thousands. It is the only one of its kind in Wales, and there is another in York, in the north of England. Elsewhere, so many died that it was impossible to bury them in individual plots, so they were interred in mass graves known as cholera pits.

Cholera killed and left social stigma wherever it spread: many were reluctant to even help bury the dead, in the belief that the disease would spread to them if they came into contact with the bodies. So those killed by cholera weren’t even allowed to lie with those who had died from other causes.

It wasn’t until the 1850s that some understanding of the causes of cholera was reached. The filthy, squalid, unsanitary, overcrowded conditions in new industrial towns like Tredegar – which grew around an important Ironworks – were ideal for the rampant spread of the disease, with water often contaminated with sewage, and access to clean water pretty much impossible. Ironically, the rainwater that fell on this hillside would probably have been the cleanest, purest thing anyone could have drunk.

The town of Tredegar is at the foot of the hill and is worth a brief visit to see the remains of the Sirhowy Ironworks and Bedwellty House and Park, once the residence of the owner of the ironworks. The afternoon tea there is lovely, but it’s difficult not to put the contrast between the luxury of the house and the fetid conditions in which his workers languished. No reminders of that exist now, except for Cefn Golau.

Cefn Golau Cholera Cemetery can be reached by an hourly bus – the number 4 service – running between Tredegar and Rhymney. Rhymney is also the terminus of a train line from the Welsh capital, Cardiff.

If you’re travelling by road, it’s just off to the south of the B4256 between Tredegar and Rhymney.

Cefn Golau doesn’t take long to visit. It makes sense to visit it if you’re exploring the nearby Brecon Beacons National Park, or if you’re driving north from Cardiff.