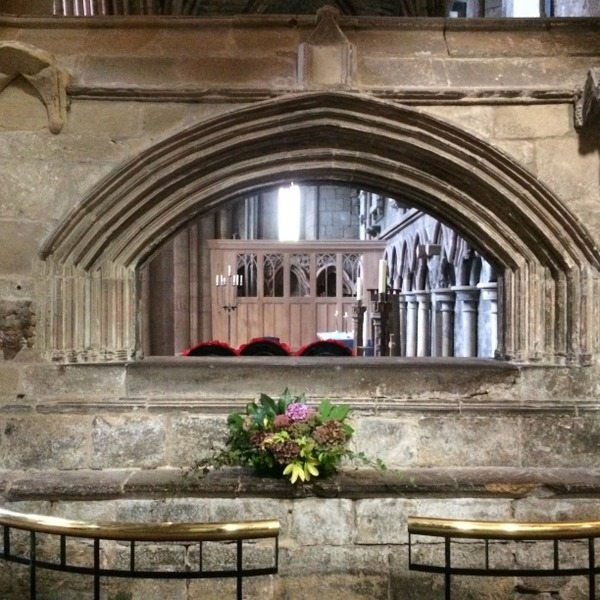 Today we headed out to Hexham to visit it. famous Abbey. It is not far from Newcastle upon Tyne so the perfect day trip.Of course as we headed down the motorway, the rain started with drops the size of two bob bits. We were glad we’d put our wet weather gear on before leaving. The rain was in a big front and we were lucky to skirt around it with just a few passing showers. Although it wasn’t raining we still had to contend with the rain on the road being picked up by the traffic and made airborne. Heading west from Newcastle we really noticed the change in colour of the trees lining the road. Autumn colours of reds, yellows, oranges, and browns covered the trees. The low temperatures of the last week have really signalled the change in seasons.
Arriving in Hexham we headed to the big carpark which lies below the old town.

Originally known as Hagustaldes ham the town grew around the abbey founded by Saint Wilfred in 674. Hexham has an interesting history, much of which revolves around the Hexham Abbey. 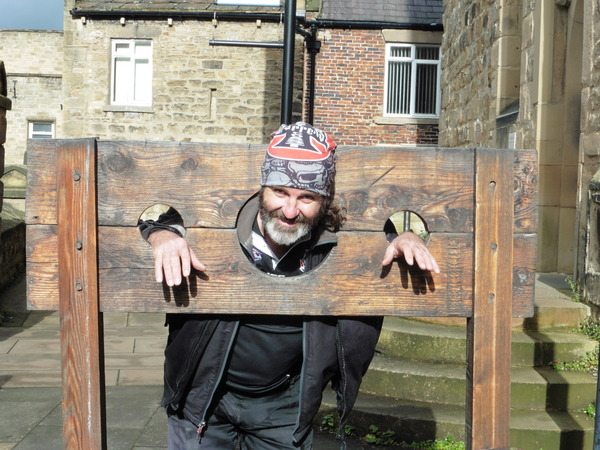 Near Hexham Abbey the Old Gaol was built in 1330 and holds the dubious title of England’s oldest purpose built gaol. It was built by the Archbishop of York to hold his prisoners and was built from stones from the roman ruins at Corbridge. It consisted of two dungeons to house prisoners and upper cells for those awaiting trial. The gaol operated for almost 500 years before closing in 1824 to be converted into a manor. These days it’s a museum open a few days per week.

Hexham Old Gaol costs £3.95 to visit and information on opening hours is here 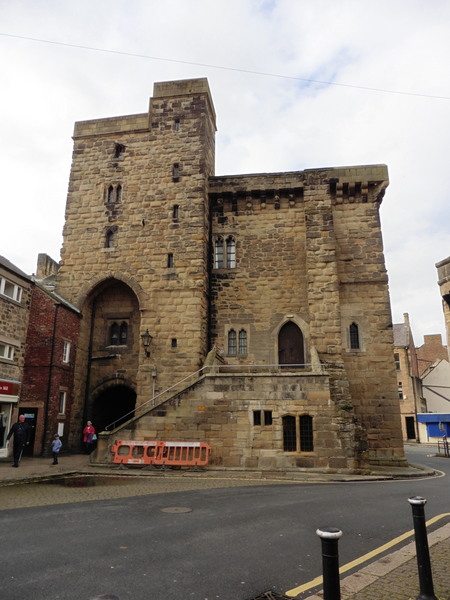 The stone gate house was built around the same time by the town bailiff and used to conduct court cases of those arrested for the Archbishop. The gate beneath it leads to the market place which dates from around 1239. Like most market places there’s not much to see but the market still operates during the week. On the 9th of March 1761, the maket place became the scene of a bloody massacre. Known as the Hexham Riot thousands of people flooded into the market square to protest against the forced conscription into the army. The Riot Act was read and fighting broke out with fifty people killed and many more wounded after soldiers fired into the crowd. 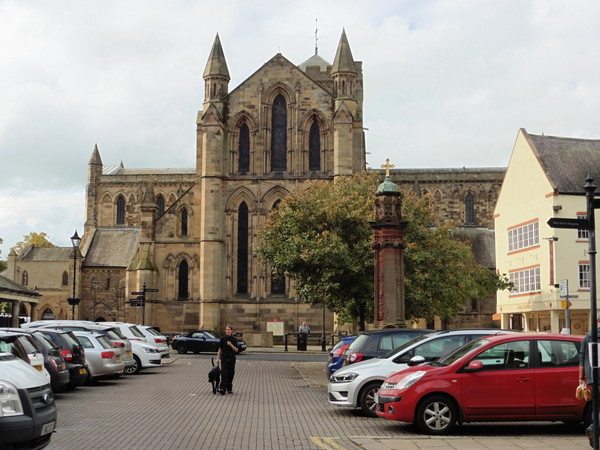 The abbey sits on land gifted by Etheldreda in 671 to Wilfrid on which to found a monastery. The abbey was transformed into its current shape in the 12th century despite being torched by invading Scots. Lead ingrained into the night stairs near the entry bear witness to when the lead lined roof melted when William Wallace burnt Hexham in 1297. 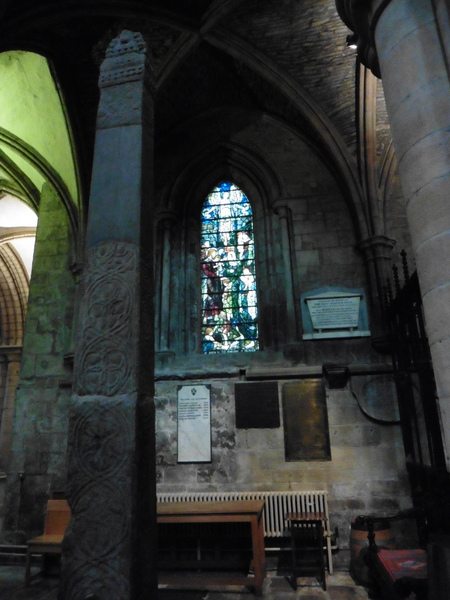 Around the church are many pieces from the abbeys history. Near the entry St Acca’s Cross which was said to have been at the head of St Acca’s grave is a feature. St Acca was the bishop of Hexham between 709-732 and was a early theologian. He was a friend of both St Wilfrid and St Bede. 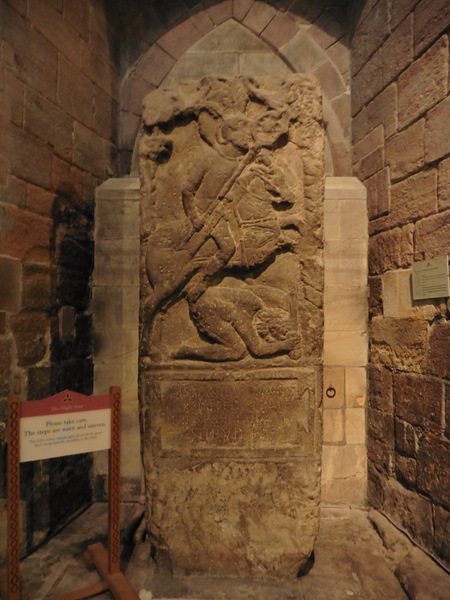 Nearby is a memorial to a first century Roman standard bearer. The slab of stone features a horseman carrying a dragon standard with a defeated foe beneath his horses feet. The Latin words translated state To the Venerated Departed: Here lies Flavius, a Horse Soldier of the Cavalry Regiment of Petriana, Standard Bearer of the Troop of Candidus, Aged 25, of 7 years service. It seems a little strange that a Roman tombstone would be featured in the church. 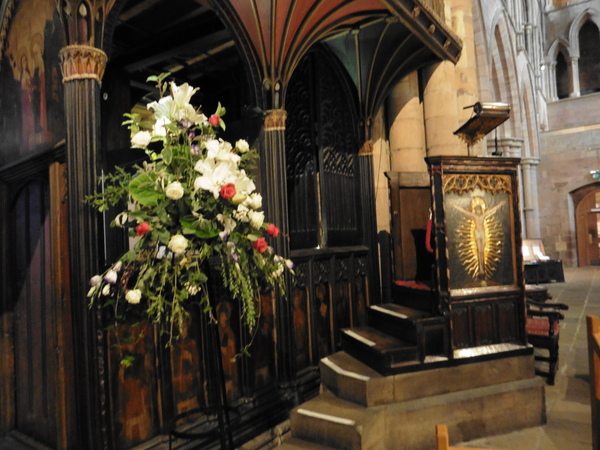 The most striking feature is probably the rood screen. Built around 1500 it features an organ loft above it with a pipe organ. Around the screen painted scenes adorn various sections with carved sections underneath. Around the choir ancient paintings named “dances of death” give a rather macabre feeling. However, they reflect a time when death was treated differently. 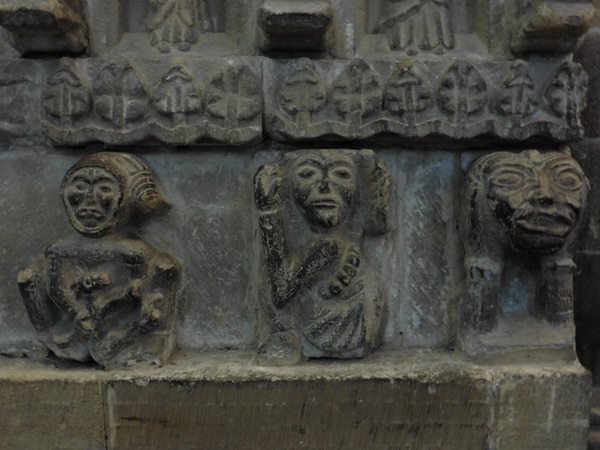 At the side of the altar a small display of Anglo Saxon stone work and tombs show the changing face of burials. Also from Anglo Saxon period of the 7th century is the Bishops chair. We expected a large throne and were quite surprised to find a simple stone chair carved from a single piece of stone. The Abbey once housed an Anglo Saxon Chalice. During Anglo Saxon times chalices were quite small and were used for one person. After the dissolution of the monasteries chalices became larger to cater for whole congregations. Many of the small anglo saxon chalices were melted down and reworked or the metal simply reused elsewhere. Not many chalices of this size remain so it’s now on display in the museum. 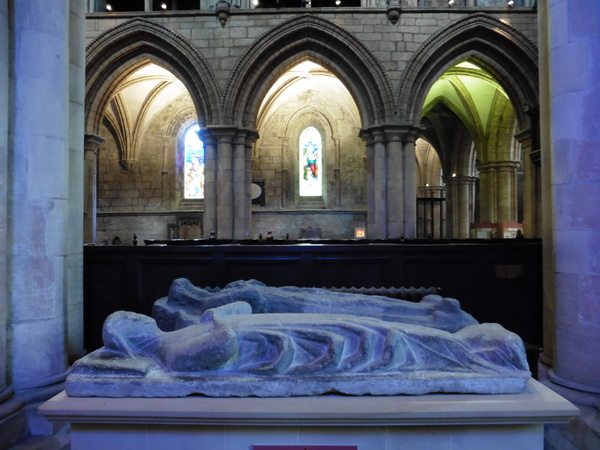 Also in the church is the tomb of Gilbert de Umfraville, Earl of Angus and his wife Elizabeth. Gilbert supported Edward 1 in his war against Scotland and the French. He also made some small contributions to the Abbey.
Beneath Hexham Abbey, the crypt contains stones of Roman origin many of which would’ve probably been sourced from the nearby Hadrians Wall.
There’s lots of items of interest around the abbey from wooden crests dating from the 1500’s, family standards, and Hieroglyphic bibles dating back hundreds of years. 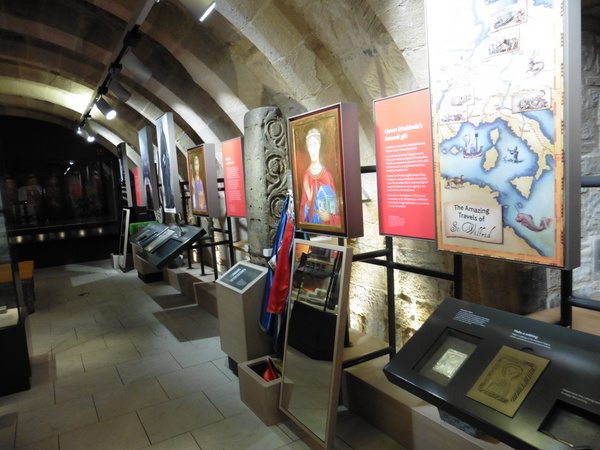 Attached to the Hexham Abbey is an interactive museum. It’s a great place for young and old. Kids can read, touch, watch videos, interact with computers and really get involved in the activities. There’s lots of history such as the scottish and viking raids. Hexham was once a major glove manufacturing centre, so kids get to learn about the smelly process of making gloves. There’s also a chance to dress up like your favourite monk or tip your hand at transcribing. Using a special digital goose feather the touch screen appraises your talent at calligraphy. Fortunately we won’t be getting a call up any time soon to transcribe any holy books.
Also in the museum is some tweets regarding the Hexham Riots. It’s a fun way to look at history.
There’s also a fun section which explains the mechanics used to lift the blocks which form the huge church. It gives kids a chance to understand how the stone blocks are quarried, stained glass is made, how roofs are made and what tools are used by different trades.

At the rear of Hexham Abbey is a nice cafe which unfortunately was just overflowing with people all chatting and enjoying the food. With no spare spaces left we headed for a local pub. 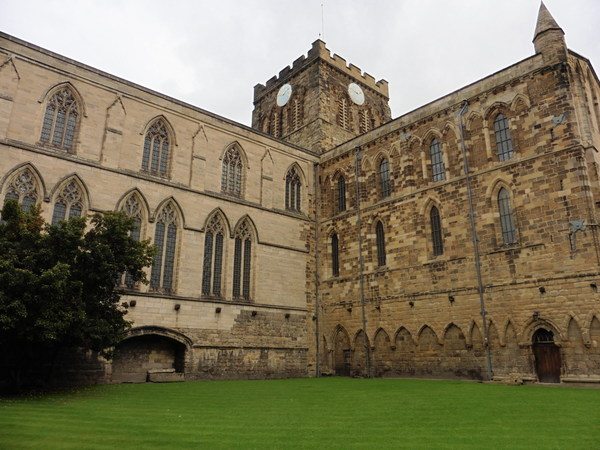 As we walked out of Hexham Abbey we could see the different colour of stone where the fire during the Scottish raid hundreds of years ago destroyed the roof it was really quite noticeable.
Hexham Abbey was quite an outstanding place to visit. Not just the church itself but the museum really add to the whole experience.

After a meal at a local pub it was time to head to Newcastle-Upon-Tyne for the Irish Festival. A week long festival held by the local Irish community. It was nothing like we imagined with all sorts of acts from belly dancers to Chinese fan dancers and even a few Irish acts. It was a fabulous night out but that’s another story.