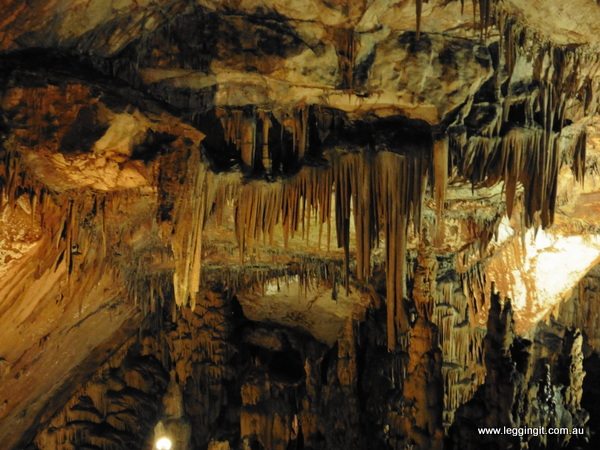 Today we caught up with the Split Expat Group, for a visit to Špilja Vranjača (Vranjaca Cave).
Our meeting point was the Riva where after introductions we headed out to Kotlenice. The ride out took us over the range which separates the coast from the interior and as we passed through the last tunnel near Klis there was a quite noticable temperature change. The temperature dropped at least five degrees in about 100 metres. It probably explains why this combined with stony limestone soil make the area quite limited in agriculture.
We turned off at Dugopolje and headed for the village of Kotlenice. Along the way we learnt a new word, Serpentina (curves ahead) as we passed up and over the hills into Kotlenice. It’s our new favourite word 🙂

The road out to Špilja Vranjača is quite well signposted and we found the parking quite easily. After everyone arrived we wandered down the hill 300 metres to the caves entrance where we met our guide.

Špilja Vranjača cave lies at the foot of Mount Mosor and from the entry a few hiking trails lead off through the national park of varying distance and degree of difficulty. 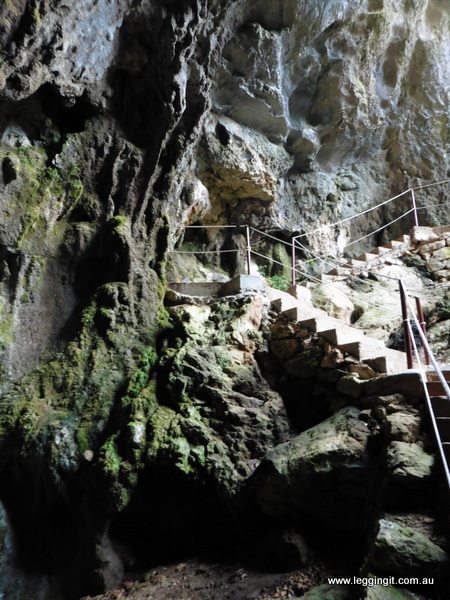 The local Punda family manage the organisation of visits and maintenance of the cave. At this time of year, the low season, visits are by appointment but it’s quite easy to arrange. The price of admission to the cave was quite reasonable at 40 kuna ($8 Aus)
The entry stairs wind down into a large open cave which our guide told us has been used by people dating back to Neolithic times. Pottery, bone fragments and other artefacts which have been found in this part of the cave are now on display in museums. A small passage leads from the entrance into another chamber. 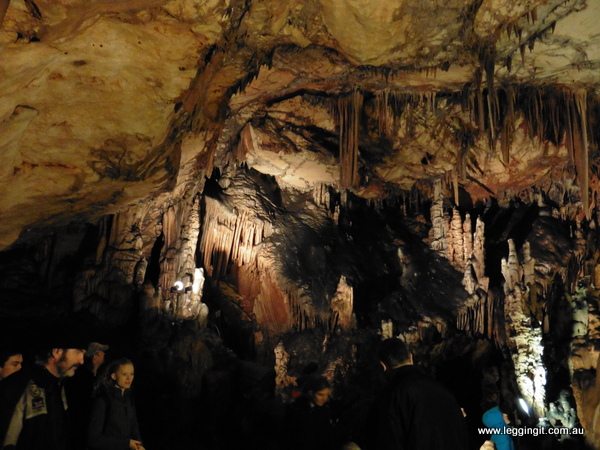 The second chamber wasn’t discovered until 1903 by the land owner. After it was surveyed, work began on the installation of a road, parking lot, and path to the cave entrance. Also around the entrance to the cave, pines were planted and other necessary features installed such as concrete stairs, handrails and electric lighting.

Climbing down from the surface to the floor of the first cave isn’t too taxing. Looking at the sheer size of the cave, it’s quite easy to see why it would be significant to early people. It would be the perfect place for music or a performance on a summer night. 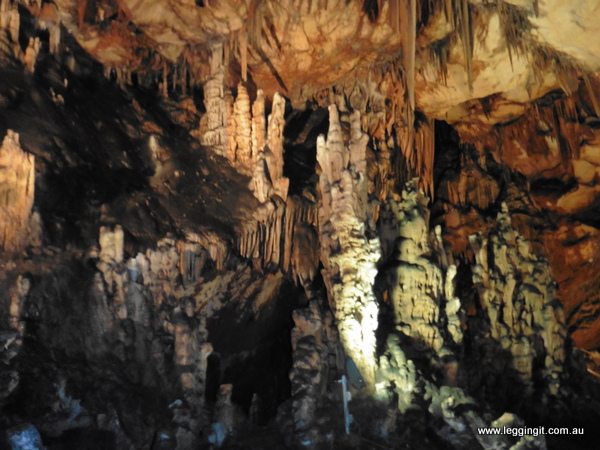 Passing through the connecting passage we suddenly became aware how different this cave was to Baredine Cave near Poreč. This one also is a Karst formation however the earth above are slightly different so this cave has different minerals making up its features. The current weather is also different, and as it is now winter the cave is a lot wetter.

However, although the temperature is about 9 C outside, it’s a cozy 15 C throughout the cave all year round. One tiny resident of the cave that we spotted was bats. There’s three species which inhabit the cave, and as the insect numbers decrease in the winter months these little guys find a spot to hibernate. They are so tiny it’s almost impossible to see them amongst the features. 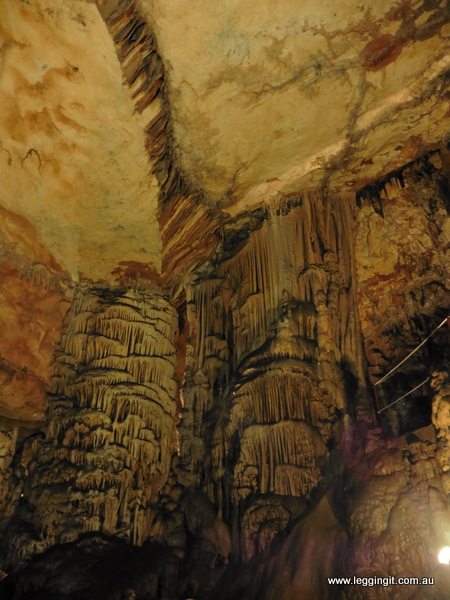 Wandering through the cave there’s lots of the typical features like stalagmites, stalactites, straws, shawling, however, because of the mineral deposits which make up the earth there’s lots of reds, blacks and whites (a Saint Kilda cave). There’s nine sections of the second cave and the Punda family have been doing tours for three generations so every feature in the cave has a name. Like in most caves there’s a variety of natural features which look like owls, wise men, holy family, old ladies,and bacon. There’s even a lovers cave but we will leave the graphics up to your imagination. 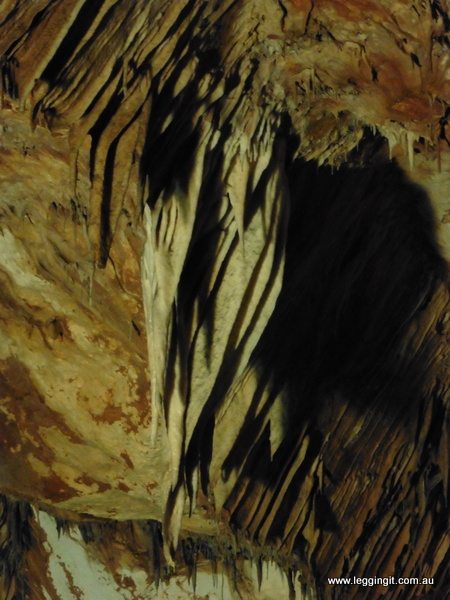 Along the way we learnt a bit about the formation of the cave and how stalagmite growth is a painfully slow, 1 mm every 35 years. We even heard a tune played on stalagmites, which reminded us of the gamelan music in Bali.
The climb back up wasn’t too difficult and we were invited back to use the caves picnic facilities at any time, which sounds like a great idea. 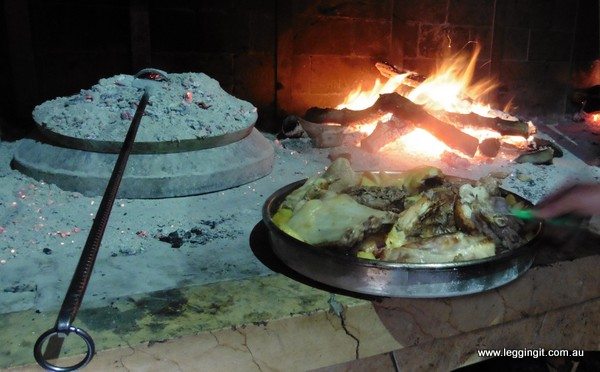 After a discussion with the group, lunch at a local restaurant in Dugopolje was suggested. It sounded like a great idea and soon a convoy of cars and one motorbike were heading down the road. OPG Dodoja was tucked away in the middle of an old section of Dugopolje and if you weren’t a local you’d probably not know it was there, but wow.

They happily seated around fifteen of us and soon the waiter began arriving with the local soup, almost a chicken noodle style. That was followed by platters of potato, pork, lamb, and vegetables. As quickly as the food was consumed he’d reappear to restock the platters. It was the same with the table wines, water and soft drink. We were then treated to a platter of local cheeses and Prosciutto and finally  thin crepes filled with jam or nutella. They were just delightful.
It was great mixing with all the different people from the expat group, finding out where they were from, why they chose Split and what their plans were. They were from all different countries and all different walks of life. There were teachers, tour guides, retirees, budding writers, a wonderful mix of people with interesting stories. Talking with one of the expats we discovered that he and another member were seaplane pilots at European Coastal Airlines. He told us how he had the best job flying over the Croatian islands to different destinations. We were extremely jealous and now are considering whether we should try a flight on a seaplane over the islands. Every time we sit at the Riva in Split, and see the seaplanes landing in the bay we’ll think of him. 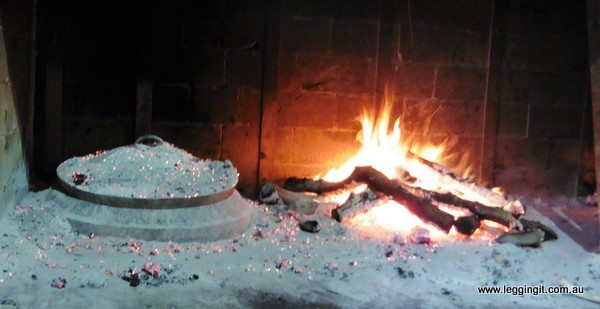 On our way out we got to learn the secret of Croatian cooking by looking inside the Peka, (the traditional Croatian oven). On one side a wood fire raged and on the other was a tray of roast meat and vegetables covered by a bell shaped lid. The chef scraped the coals from the fire and dumped them on top of the lid until it was covered. This way it kept an even temperature. We may have to install one of these ovens when we get home.
After a great morning which stretched into a day we said our goodbyes and headed back to Split. The expat groups are a great way to get involved in the local community. They also were handy when we were looking for a Honda shop to source a replacement oil filter for the Princess. Local knowledge is so important when you’re in an unfamiliar country or even city.
Tomorrow is oil change day so we have to find a quiet spot to drop the oil.