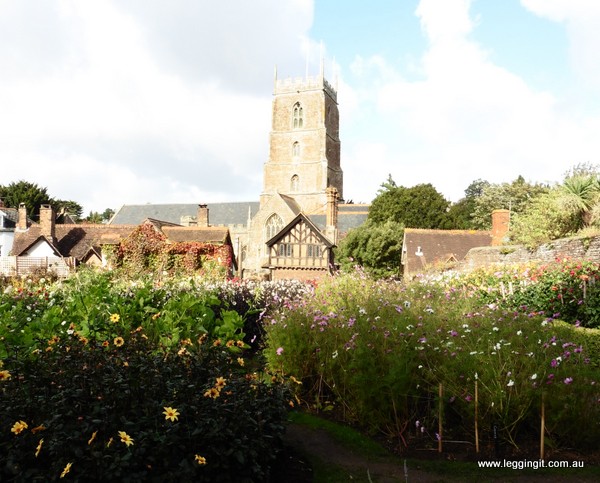 The weather report for Exmoor didn’t look encouraging as the tail of a hurricane was due to hit, with strong winds up to 110 km’s per hour. We had to take our chances and hope we didn’t get blown away.

After saying goodbye to our hosts we headed off in brilliant sunshine, but with gusty wind. The motorbike was pushed around pretty heavily by the wind so it was up and down with the throttle and try to stay on the road. In the gusty conditions we avoided the motorway and took the A roads following the coast out to Weston-Super-Mare. The beach at which reminded us of Melbourne’s inner city beaches with grey skies overhead, occasional light rain, gusty winds…..yep Melbourne to a tee.

Passing Nether Stowey we spotted a National Trust sign so decided to take a detour. Nether Stowey is a picturesque little village with lots of old houses, which luckily the main road bypasses allowing only the people who want to go there to enter. So the pace is a little quieter. Unfortunately we arrived on the wrong day so the National Trust Cottage was closed so we decided to stop for coffee and cream tea at The Ancient Mariner. It was a nice pub with a seafaring theme with great service which is something which can be expected in most villages.

The road took us further along the coast until we reached Dunster, where we stopped at Dunster Castle to make use of our National Trust membership. The Castle is situated high on the hill overlooking the little town. There’s obviously a good relationship with the town because the signs point you towards the cafe’s in the town, so we stopped off at the Stag Inn for lunch. The Parish Church of St Gregory is at the top of the street and it boasts the longest rood screen in England. This screen was installed after a disagreement between the parishioners and the monks. The monks were given the east half of the church and the Parish the west. An interesting way to partition a building. It reminded us of fighting children sharing a room where you put furniture between them.

The castle at Dunster was owned for 600 years by the Luttrell family, originally a Norman fortress before it was redesigned in the 16 -1700’s to reflect changing family fortunes. The Luttrell’s were staunch monarchists who during the parliamentary war backed Charles 11 and were besieged by Cromwell’s forces until they finally relented and swore allegiance. An interesting prisoner was a local journalist who spoke out against the monarchy and was imprisoned. He didn’t learn from is imprisonment for he spoke out against the new parliamentary forces and he was branded with the initials SL (Solicitous Libeller), had his thumbs cut off and sent to Dunster Castle. He stayed there for eight months during which time he created the family patent of nobility.

The house is quite beautiful with an interesting modern history where the father Alexander, thought his son Geoffrey should pay his way in life so didn’t transfer the castle and avoid inheritance tax. When Alexander died in 1944, Geoffrey was faced with a huge inheritance tax, so had to sell off the castle and estate. After 5 years Geoffrey bought the castle again and a small part of the estate which his son gifted to the National Trust in 1977. The castle reflects the Victorian era with furniture, decorations, a glass conservatory, snooker room, gun rooms. Below the castle in the cellars a bat cam is setup to observe the creepy inhabitants which call this place home.

Once again the weather was changing so we decided to head for our hotel. The wind was fairly howling as we crossed over the Exmoor National Park along the coastline. The views were spectacular but the ride was a little scary with winds buffeting us as we made our way through the treeless moorland. However, the weather didn’t deter the Exmoor ponies who were happily grazing along the side of the roads and in a few of the wooded areas pheasants were out in large numbers (we’re talking groups of twenty or more). We had to stop a number of times in fear of running them over. Coming down the cliff road into Lynmouth was pretty scary as it was really steep, completely exposed to the wind with no safety rails to stop us from going over the edge and onto the rocks hundreds of feet below. Lynmouth however, was a beautiful spot with a river running through it, lovely houses and as we rode up the steep hill out of town we had glimpses of small waterfalls, golden leaves, and rushing water. Truly breathtaking.

We battled the wind all the way to Barnstaple, and then Bideford where we thought we were going to get blown off the bridge. Eventually we made it to our hotel, The Hoops Inn in between Horns Cross and Bucks Cross on the road to Clovelly.

Wow what a beautiful place. It’s an old inn with a thatched roof, with lots of old etches on the walls of maps, castles and the like. When we reached our room we were blown away with a big four poster bed and a really hip modern shower. After a shower we headed down to the restaurant where Ron enjoyed a hearty steak and ale pie and Michele the most amazing Vegetarian Lasagna. The staff where really friendly and the manager pointed out some great places to visit in the area. Our original plan was to stay for only one night but realising there was so much to do (and loving the idea of a Four poster bed) we decided to stay for another.
So fingers crossed and weather holding we shall visit some of her advised places tomorrow.

You can see more about the Hoops Inn by clicking here. We got a really good deal from bookings.com and you can access them via our page (we will get a small percentage if you book anything)

5 thoughts on “Getting Blown Away in Exmoor”