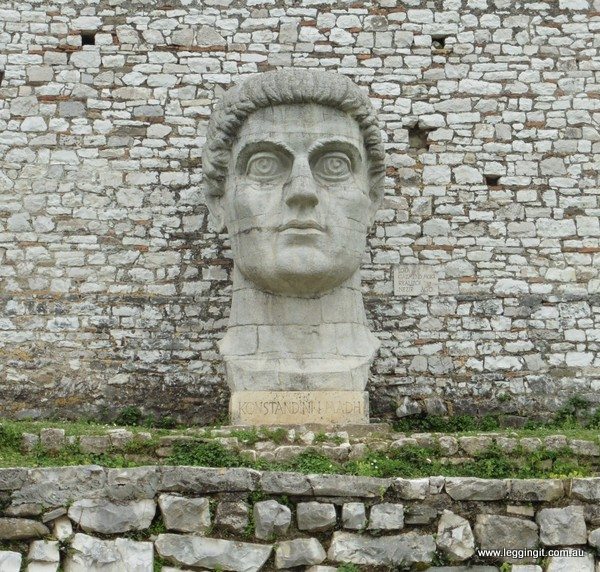 After postponing our trip to Berat yesterday, due to falling ill, today it was all hands on deck as we headed south. We headed to Troy for breakfast where we met up with Klodi who arrived to tell us that the power-pack was fine but there was something wrong with Michele’s laptop. Klodi really has done a lot of running around on our behalf chasing the powerpack for this laptop and organising a tyre, we just don’t know how to thank him enough. 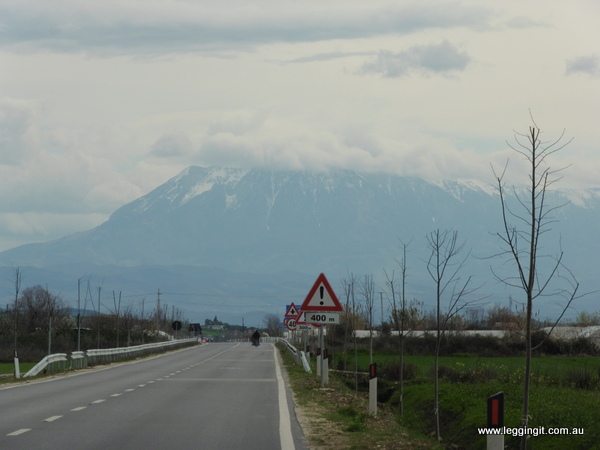 Leaving Durrës we soon picked up the SH4, the main highway south. The road south took us through lots of flat plains dissected into a chequer work of farms. As we turned off the highway onto the SH72 road to Berat we noticed a sign prohibiting horse drawn vehicles and about 100 yards up the road a donkey cart full of fresh cut grass. It seems that horses are not allowed but donkeys are still permitted. Further along the highway there were lots more including one crossing the highway in front of the police who were oblivious. We find it quite interesting seeing horse or donkey carts still in use. It reminds us of Morocco. Another favourite is the carts powered by a walking tractor.
When we arrived in Berat, I thought it was a tiny city and sort of wondered what the fuss was all about. We actually had turned off before the heart of the city and needed to travel a few more kilometres to see the view which everyone raves about. 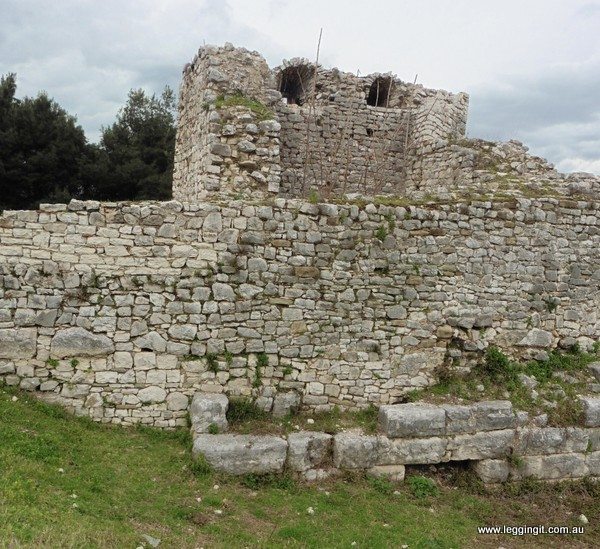 Instead we headed up the olive tree covered hill towards Berat Castle. The road was a little rough and it wound around lots of blind corners as it snaked up the hill. We were lucky to have a car in front of us which acted like a shield and soon we were arriving at the top of the hill at the roundabout below Berat Castle.
From here we could see the heart of the city stretched out below us and the university of Berat, which is aptly nicknamed “the White House” due to its shape. 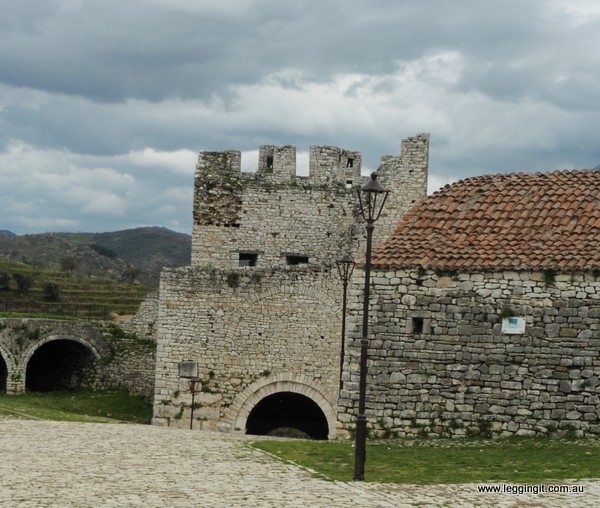 There’s a few roads which connect to the castle, all meeting near the roundabout. The bitumen one which we came up and there’s a paved one which leads straight down into the city below. From the roundabout there’s a paved road which snakes back and forth before entering through the outer wall of Berat Castle. The cobbled surface was really rough so Michele decided to walk up. I rode the bike up but it wasn’t very pleasant dodging potholes and subsidence. Near the main entrance I parked up and we were soon met by our couch surfing host, Isuf. All the locals at Berat castle had been on the lookout for two Australians on a motorbike and had passed the word onto him.
We headed to Hotel Kalija for a coffee and to find out a bit about our couch surfing host Isuf. It was a great location with a nice piazza overlooking the cobbled streets and the castle walls. Just like stepping back in time.
After a coffee at the Hotel Kalija, Isuf took us on a tour of the castle. His family had owned a house here and in the summer he worked as a tour guide so he really knew his stuff. 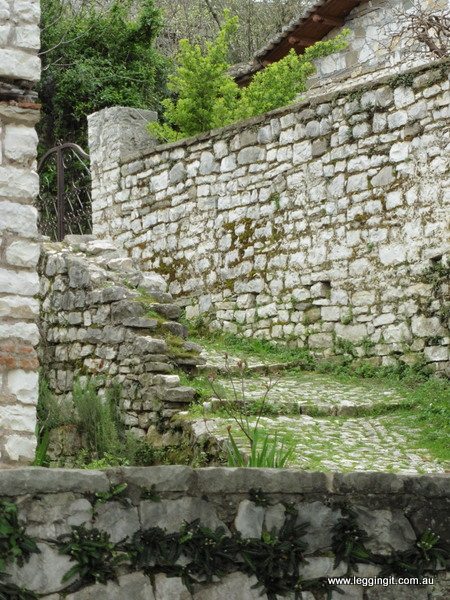 Berat Castle is built on hill overlooking the Osum river below. With a ring of mountains protecting the rear it’s a natural vantage point. The first castle was built by the Illyrians with the evidence of huge rectangular blocks. The next occupiers of Berat castle were the Byzantines who fortified the position in the fifth century and the evidence of their stone work is quite different as they used rough stone. They also built about 20 orthodox churches with a mixture of stone and brick. We found one being repaired, which was quite beautiful.
The last people to capture the castle were the Ottomans in the 13th century, who in repairing defences used dressed stone blocks. Most of the buildings inside Berat Castle reflect the Ottoman influence and date back to the 13th century. 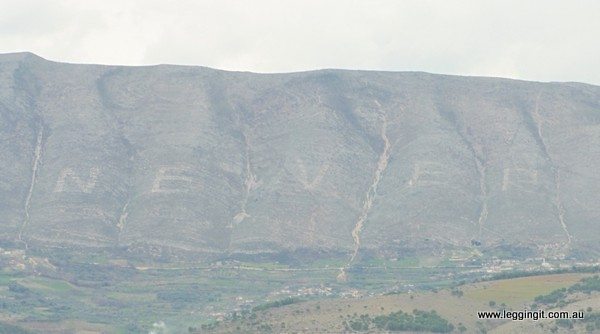 Walking around Berat castle it really is amazing to see the old buildings are still lived in, with gardens filled with vegetables, grapevines and fruit trees. We’ve been to many castles throughout Europe which have been nothing more than museums to the past, and tourist attractions but this place is alive.
The views from Berat castle are amazing with views of the valley straddling the Osum River to the north, Berat City to the east and in the distance the snow capped mountain of Tomorrit. Looking out across to the nearby hills a huge word “Never” is written in stones.

Isuf told how during the communist era school children would climb the nearby hill to maintain the rocks which form the word “Enver” the name of the old dictator. After the fall of communism the letters have been changed around so that now the word reads “Never”. A reminder to everyone that never again will a dictator rule the country.
The local Taverna owner let me park the bike in their parking space near the front door so it was safe and secure. Taverna Lazarus was a great taverna with a really friendly family running it. They’ll definitely be seeing us more often. 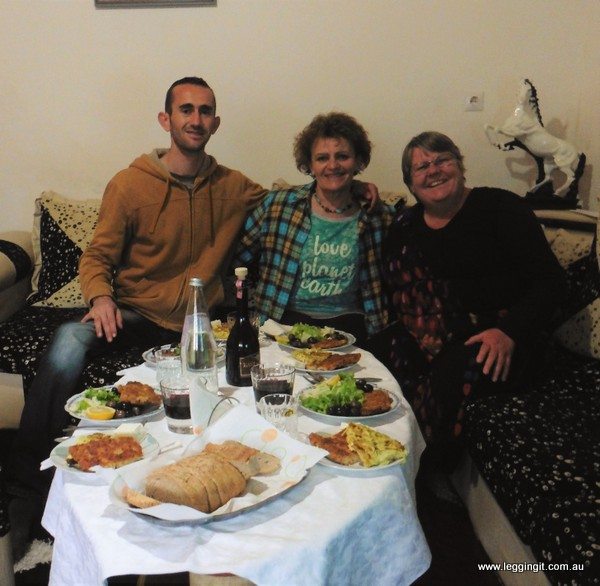 After touring Berat castle we headed back to Isuf’s house which he shares with his mother Drita. It was a simple two room building with a bathroom and a separate attached kitchen. We felt a little bad when we realised that we were taking over Drita’s room. However, it was interesting contemplating how we use space differently. The lounge room transformed into a dining room and later transformed into a bedroom. We have separate rooms for all these different functions which we fill up with extra furniture and crap. It’s just a different way to view things. The house had an amazing view across the valley to Berat castle. Drita is a keen gardener so around the house are lots of fruit trees and a vegetable garden, it’s one of the simple things which many people in Albania still have.
We felt so welcomed by Isuf and Drita who soon were settling the table with all sorts of traditional Albanian food that Drita had cooked. There was so much that there wasn’t a single spare inch of table left. The food was interesting and like nothing we’d eaten before. We think the extra serving of love made it taste extra special.

After lunch we learnt that Isuf had been a rapper in his younger years Wow. We just had to get on YouTube and watch some of his videos. Drita herself, was an author and had a few of her books published. What a talented family.

Late in the day we battled the pelting rain as Isuf and Drita showed us the local village Orthodox Church. During communist times religion was banned and this church was used as a barn to house animals. It was quite interesting looking around the church as it was quite simple with a plain iconstasi. The pictures of saints which surrounded the walls were also quite simple. However, comparing its simplicity to some of the churches we’ve been to it had a nice feeling inside it. With the rain coming in sideways and our umbrellas blowing inside out, we did our traditional three circuits of the outside of the church before hurrying home. 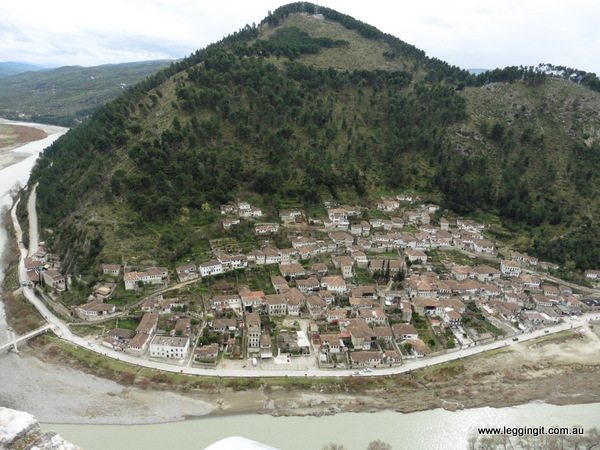 Just on dark Isuf and I visited Taverna Lazarus and Hotel Kalija to meet some of the locals. It’s an important part of Albanian culture, when you vouch for someone. If they tell someone that you are their friend then you occupy a special status but when they say that you are their friend that is staying with them it’s an even higher status. It probably explains why everyone was trying to ply me with rakija. They were interested to hear that I was from Australia and of course keen to hear what I thought of Albania.
I also got to try some of their Albanian Rakija, which is supposedly the best in Albania and I must admit I would tend to agree with them. He also showed me around the Berat city which is amazing at night, with all the local people out walking up and down the central city promenade.
Above the heart of the city the old Ottoman Style house are all spotlighted at night and it was wonderful looking up at the old houses up on the hillside all lit up. It’s easy to see why they call Berat, the “city of one thousand windows”. We also visited a computer repair shop where upon removing the laptop from the carry bag it suddenly started working again. How embarrassing, but it saved us €30.
Returning home Drita greeted us with another gourmet delight of Albanian foods washed down with homemade wine and rakija. It was really great to eat homemade foods which had been grown in her garden. There was even a pie made from nettle. It was really tasty and so good to get some back on a plant that has given me grief in the past. After dinner we chatted late into the night, finding out about life in Albania and about all sorts of things.
Tomorrow Isuf and Drita are leaving us as they have a family celebration to attend in another city. It shows the respect and trust that exists between people in the couch surfing world. Hopefully it’s sunny tomorrow so we can look around Berat a little better.