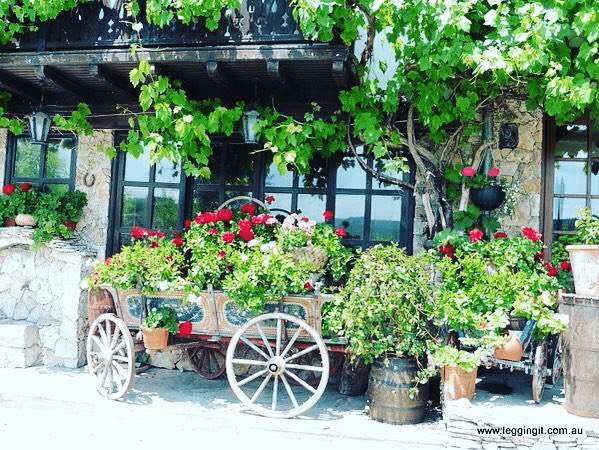 After a day of dodging the rain yesterday today we woke to the sound of steady rain. Today everything has to be covered to keep dry and we’ll have to drag out our wet weather gear for our trip to Sofia. After packing the top box I tried starting the bike but the battery was flat. Luckily there was a little bit of a hill just up the road so I pushed it down the cobblestones until I got some momentum and dropped it into gear. It fired up first go and soon I had it idling outside the guesthouse as I strapped the rest of the gear onto the bike. When the bike was packed I called Michele and we set off.
The road out of Veliko Tarnovo to Sofia was pretty well signposted although being able to read cyrillic came in handy as the turnoff just out of town was of course in cyrillic.
The road was jammed with trucks and long lines of cars looking for opportunities to overtake them. It was like a scene from wacky racers with cars bobbing out and back, before seeing an opportunity and flooring it past.
With the constant rain it was pretty hard to appreciate the spring wildflowers growing by the side of the road, or the blue hills in the distance contrasted against the dark skies.
After about 100 km’s we decided it was time to fuel up and have some breakfast. Spotting a little Shell servo with a small local restaurant just beyond it pulled in. It was great to be out of the rain so we enjoyed a nice omelette and a few cups of coffee. Whilst we were sitting there the rain eased off so it looked like the rest of the run from Veliko Tarnovo to Sofia might be clear.

Where is my wallet?

As we were getting dressed to leave I checked my pockets and the greatest fear struck me…..No wallet. I checked every pocket twice, and then once more. I even checked the panniers on the bike but I couldn’t find it anywhere. The last time I’d seen it was in my jacket on top of the gear bag. The wallet had our last twenty lev that we’d planned to pay for breakfast and the restaurant didn’t take cards. Luckily all our cards are in a pouch that I wear around my neck so we could withdraw money from a bank but we were then faced with the problem of where is the closest bank? We asked the lady and she had no idea. I push started the bike and returned to the Shell servo. The staff there had no idea also. Maybe I wasn’t pronouncing “Bankomat” the right way. I continued down the road for about ten km’s with no luck before heading Ugarchin another 15 km’s away. Ugarchin,like many Bulgarian towns, has seen better days. The local factory is abandoned and many of the houses have fallen into disrepair. Some of the older houses had the plaster falling off exposing the mud bricks underneath and it’s a town where many people still have a horse and cart. The only nice part of the town was the kids playground and grass strip in front of the town hall. It must be a depressing place in winter.
I took a ride around the centre of town but couldn’t see anything which looked like a bank in the one street which sort of formed the main business area. I headed towards the other end of town but the road became smaller and filled with potholes. There lots of dodgy looking blokes standing around watching me. Definitely my chances of finding a bank weren’t gong to improve. That’s when I thought to find the police station, they should know. As I reached the Main Street again I stopped a local lady and asked her “bankomat?” “beyankomat?” (Putting on a russian accent) “bank?” “beyank?”. Suddenly light bulb moment! She understood me! She pointed and curved her hand. Ah it’s around the corner. Merci.

Sure enough there was no signs just a hole in the wall ATM. Of course the rediteller card didn’t work, despite the maestro signs on the machine. Then I tried the Visa card…….success.

The return trip back to the restaurant didn’t take quiet as long and along the way I spotted a few old mud brick farm houses mostly abandoned. Along the way I also spotted a few old soviet ex military 2 1/2 ton ZIL 157’s and a blue and white GAZ 52 being used as logging trucks. I love seeing these old beasts still in use. Some of my favourite YouTube videos feature these beasts taking on the elements in Siberia. They are so tough.

Finally I arrived back at the restaurant, paid the bill and we were on our way again.

The weather for the last hundred km’s into Sofia were much better with lots of wind to dry us out again. Once again we were shaking our heads about Bulgarian roads as we struck a section under repair. The new asphalt had been laid a few inches higher so when we hit it Michele was catapulted high into the air. No flashing lights, no signs, and nobody working on it. 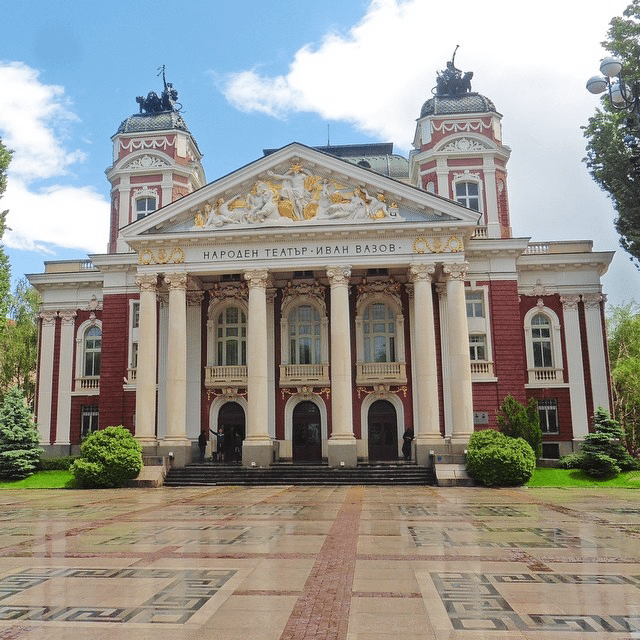 For most of the journey from Veliko Tarnovo to Sofia the road passed between two mountain ranges and we passed through the valley. As we approached Sofia the road passed through a few tunnels before emerging into a wide plane which surrounds Sofia. After a brief stop at Maccas we were soon arriving at our couchsurf. For the next few days we are staying with a young local couple who are zeitgeists so it should be interesting finding out their world views. As I started to unpack the bike I took the cover off the winter bag and what was sitting on top? Yes my wallet. I must have put the wet weather cover over the bag without realising that the wallet was still sitting on it. Ah the tribulations of a world traveller.

Tomorrow we’re going to catch up with Jeff Smith from smittygonerideabout. He’s on his way to Moscow to rendezvous with Lynette and Kurt from 2XTW (who we met last year in Barcelona). They are planning to ride across Russia to Vladivostok which will fill n some blanks for them and complete Jeff’s around the world tour.