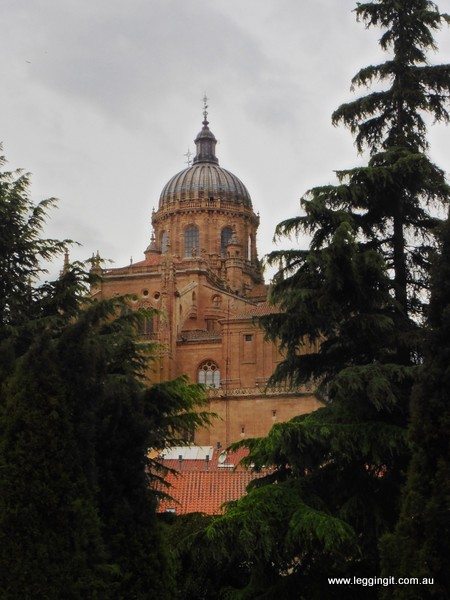 A strange day that saw us meeting a Sage in an unexpected place on the road to Salamanca. A steady drizzle greeted us as we headed south out of Porto, the north again into Porto and then south again. Boy the low clouds were playing havoc with the Satnav which kept recalculating but eventually we just picked up the toll road and headed south. It was just impossible to stay dry with rain penetrating throughout the seams of our wet weather gear and trying to keep the toll road ticket dry was another challenge. Ron had a plastic bag just in case but by the time we finally arrived at the pay booth the ticket was pretty screwed up. The attendant was pretty cool as Ron stopped the bike, flipped his helmet up, took his gloves off, opened his jacket, dried his hands, found the plastic bag, pulled the crumpled ticket out and passed it across.

Traffic was building up behind us and we kept apologising but he simply said ” No need to rush, you are only on this earth once, take your time to enjoy it!” Wow we were blown away, such prophetic words and none truer all tumbling from the mouth of an attendant in a toll booth.

After that riding in the rain was quite enjoyable as the words he spoke slowly swam around our heads. Pretty soon the sign pointing to Spain took us to the east and we travelled through some pretty rough countryside. Lots of hills strewn with boulders and hillsides dotted with golden broom, truly magnificent. Eventually we found a little town to stop for lunch and as we slowly dripped all over their floor we enjoyed another lovely meal of pork loin, chips and salad. (I don’t think we’ve ever eaten so much pork but we’re enjoying it while we can)

It was interesting how the landscape changed as we crossed the border into Spain as the hills were replaced with rolling hills and good farming country. Along the side of the road announcing our arrival into the Castille Region were statues of bulls painted in all different colours, as this region is the breeding place of the fighting bulls of Spain.

Soon we were arriving in Salamanca, which to our surprise was not a sleepy little village but a thriving city. We found our hostel and discovered we did not have to codes we needed to enter so had to contact a phone number to find out how to get i. Very odd situation almost an abandoned place no staff and hardly any people staying there but such is life.