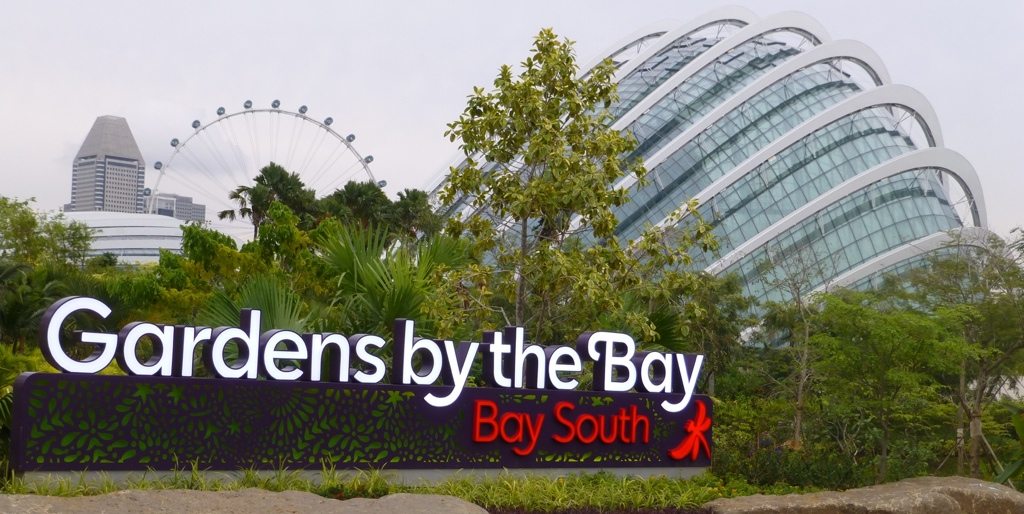 Today we were up early but did not get moving till late. After breakfast we got organised and took a taxi to the bus station. The bus to Singapore arrived quickly and we paid our fare, note buses give no change so while the fare was only 1.70rm each we paid 5rm. After a very short ride we were off the bus with the throngs of locals going through immigration, passports stamped and out the door down the escalator and back onto the bus.

Over the bridge then off the bus again this time though immigration in Singapore ( my tip for this is make sure you have a pen as you have to fill in an immigration card) of course our pen was in the other bag….so we had to borrow one. We met a lovely group of young German backpackers who were on their way to Borneo, sadly they had already been to Australia or I would have invited them to stay when they came. They were shattered having just spent 12 hours on a bus along with losing a phone along the way. Anyway we filled in our forms and headed though immigration and customs, down more escalators and we were on the bus ( the buses leave as they are full so it is not always the same one).

We arrived a Kranji Station, transferred to the metro and we were at our destination in about an hour of leaving so were very happy.

The plan was to spend the day at Gardens on the Bay, we got off at Bayside MRT and then walked through the underpass and we were there, there is a shuttle bus to the ticketing area which costs S$2 for two trips ( we realised later it is actually a short walk so not necessary, this finishes at 5pm)

We got out tickets into the Flower Dome and the Cloud Forest S$26 each then went and had some lunch. My advice here is be prepared to pay higher prices as while the food is very nice you do pay for it, most of the meals were around S$20 at the place we went to and it was a cafe. That said we enjoyed our shared lunch of bratwurst with sautéed potatoes and mushrooms, bruschetta and a coffee each but it cost S36.25.

From here we headed into the Cloud Forest and it was spectacular, when you walk in you are at the bottom of a six story waterfall and all over the walls are plants and flowers. We then took the lift to the top floor and just slowly worked our way down. Each floor was dedicated to something different and had carvings and statues amongst the most beautiful greenery and flowers. We spent over an hour meandering along. Ron must have an honest face as I lost count of the amount of people asking him to take their photos.

The flower dome was our next stop and it was nothing like I expected, it was broken into gardens from different regions of the world so there was an Australian one, African etc. easy to walk around and the flowers were amazing,huge hibiscuses, roses in full bloom and fuchsias just beautiful.

Next stop was the Skywalk, in the centre of the area is a group of metal trees and around the outside you can walk along a bridge and take in the views of Singapore. We were joined of course by a bride and her new husband having their photos taken and really enjoyed the walk.

We then sent the afternoon wandering through the different gardens in the area. It really is beautiful with gardens from Malaysia, China and India all with amazing sculpures.

By then it was almost dark so we headed to find a seat to watch the metal trees light up, they looked stunning all flickering with amazing colours. At 745 there was also a display with music and the trees all lighting up to music.

Time to head home so, off to get the bus….we were catching the bus from near the Esplanade Theatres so got off at Esplanade station walking through we decided we were hungry so found an awesome Thai restaurant and enjoyed some dinner. We just missed a bus as we walked out but another came about 15 minutes later, this bus took us to the border and after a bit of confusion at Woodlands Station we found the bus to go over the border, now this was an experience, the driver as Ron put it best ‘ had the devil on his tail drove like a maniac, we got off to go thorough immigration and hoped he would be gone but it seems he waited for us across the bridge on a nail biting 15 minute ride then into Malaysian immigration. I was chatting to a young Malaysian boy who was saying he commutes every day it takes him an hour and a half each way but logically the money is much better in Singapore and the cost of living cheaper here.

When we got through we discovered people going a different way and discovered we didn’t need to get back on with the devil driver but could walk straight out and get a taxi home….

Things to Remember:
There are a few choices to get across the border, buses go to Kranji MRT, East Jurong MRT, Marina Bay Area and also there is one to Sentosa. I you prefer you can also take the train.
Bring your passport 🙂 very important
Take a pen you need it to fill in the Singapore immigration forms
Have lots of change as the buses don’t give change
Don’t panic if you don’t get back on your original bus as long as you have your ticket they let you on.

All in all JB is a cheaper option than staying in Singapore with hotels almost 50% of the price so a good option if you want something different.

2 thoughts on “Overland to Singapore we go”