The town of Kelso had a Ghost Tour as a fund raiser for its local festival so we decided on leggingit down there. We met up at the town hall where we met our ghostly guides. They issued everyone a torch to be lit when we reached the cobby on the riverside.

The tour set off with our first stop at the very place where Bonny Prince Charlie’s horse threw a shoe. A horse shoe is imbedded in the cobblestones to commemorate the event. The Young Pretender came to the town in search of volunteers to join his Jacobite army. He left in disgust when only two men came forward. R8unour has it that another horseshoe will appear when Scotland become independent Time will tell on that one. 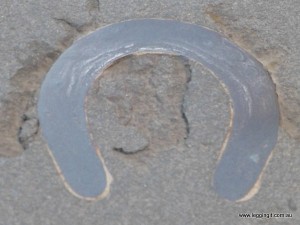 Along the way we heard how famous people had visited the town (it seems everywhere communities like to claim famous personalities as their own).

Down on the cobby we heard our first ghost story and to add to the realism we lit our torches. (Which was a great idea because it drove the midges away) 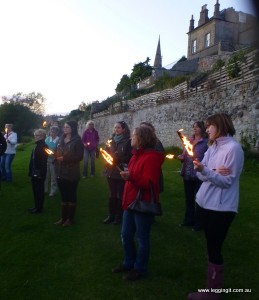 As we walked along the riverbank we must have looked a strange sight with all our torches even though it wasn’t dark. Luckily we extinguished them before anyone burnt themselves.

Nearby at the local mill we heard the tale how the secret tunnel led from the abbey to the river and how it had been dug up to discover its secrets.
Our guides were like chalk and cheese one was a history buff telling everyone the history of the place and the other the juicy stuff.

One tale was how in an effort to publicise the local fair he’d told a local newspaper reporter that they were selling the local bridge (which the London bridge was modelled on and subsequently sold to a rich American) The story took off making it to national news. The local fair was overrun with crowds and the story goes that local fair has been running ever since.

The last part of the tour took us to the cathedral which had been demolished by English invaders and now is just a ruin. It was quite picturesque with the lights bathing it in a golden glow. The volunteers had dressed as monks and with the gregorian hymns coming through the speakers it gave it an authenticity.
All ghost tours should go brought a cemetery and ours ended with the story of the disappearing cobbler. 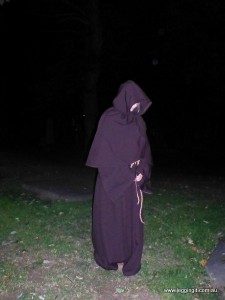 It was a great tour with lots of funny tales, sad tales and great history. We really enjoyed it.