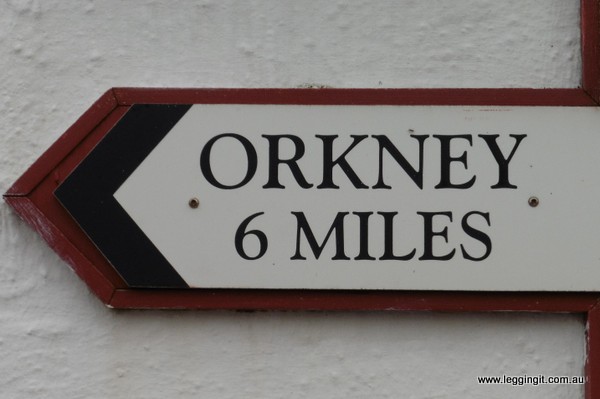 Today we were excited about our day tour to the Orkney Islands. We had a few discussions about the best way to do this and decided instead of taking the bike across we would do the Maxi Tour through the John’o’Groats ferry company. While it was going to be a long day it included all the places we wanted to see, for more information on this tour click here. Just a tip it is a very popular tour and you do need to book in advance, we managed to get it slightly cheaper through Viator so look on their site too.

Gordon our Airbnb host had our breakfast waiting by 730 and then kindly drove us down to the ferry. We boarded the Pentland Express at 845. There was a bit of a swell rolling straight into the stern lifting the boat and causing it to strain on the berthing lines. We knew that due to the direction it was coming from that once the ferry left the wharf it would be rolling heavily and we weren’t wrong. The fog was really thick and once we left the wharf we didn’t see a thing until we arrived at South Ronaldsay wharf, a little bit green under the gills. We headed for the front seat of the bus so that it would calm travel sickness and it worked a treat, however the bus had to stop for one of the Chinese girls who was not so lucky.

Stuart was our bus driver and guide and he started the running commentary telling us all about his home of Orkney along with a few corny jokes. The tour took us to Kirkwall across the Churchill Barriers which join the islands and enclose one side of Scapa Flow. The Churchill Barriers were causeways built by Italian POW’s in WW2 from a heap of large blocks of concrete. The shallower channels between islands had been blocked during the first world war by sinking block ships. However, after U47 had slipped through and sunk the battleship HMS Royal Oak killing 834 in October 39 the First Sea Lord, Winston Churchill ordered the construction of permanent barriers.
These days there’s roads across the top of the barriers and some of the block ships are visible, and one is used to stow lobster traps by ingenious fishermen.

The fog was thick and as we drove along Stuart pointed out things which on a clear day would’ve been able to see. The road took us along the edge of Scapa Flow which is known as some of the best wreck diving in the world. 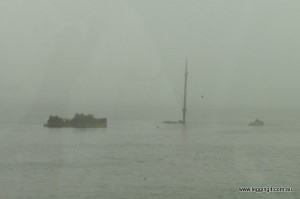 After WWI the German high seas fleet was interned at Scapa flow awaiting terms of the armistice. In June 1919 the German Admiral Ludwig Reuter ordered the fleet to be scuttled. In all 54 of the 72 ships rolled over and sunk with the British saving some. Over the next twenty years all except 7 ships were raised all except 1 still upside down and salvaged for scrap. The 7 still on the bottom of Scapa flow consist of 3 battleships, 3 light cruisers and 1 fast minelayer. Apart from these ships there’s also the WW1 &WW2 block ships to dive on.

After the eastern side of Scapa flow was blocked off the fishermen were put out of business because it was impossible to sail around to their fishing grounds. They all invested in chicken farms and for seven years supplied the whole of Scotland 11 million eggs a year. Once again they were put out of business this time by a hurricane which blew their Chicken farms away. Poor thing they then had to reinvent themselves again…

The tour stopped off at Kirkwall for about 40 minutes so we checked out St Magnus Cathedral. Its a massive red and yellow sandstone structure with small windows at the top and some interesting features. It was built by Viking Earl Rognvald Kollsen and dedicated to the Orkney saint who’s bones may have been interred within one of the pillars. Strangely enough it’s got a dungeon under the pulpit. It would’ve been torture stuck in the dungeon listening to a sermon going on and on. These days the cathedral is owned by the whole community so it’s an any denominational church.

We got back to the bus a little late to find our seat taken (how rude) so we found another down the back and joined the naughty kids at the back of the bus(much more fun) as we headed to our next stop Stromness. Stromness is a pretty quiet (and small) place. We went for a wander and then ordered lunch only to discover we had 10 minutes to be back on the bus. You have never seen two toasties disappear so quickly as we ran back to the bus.

The afternoon was the busy part of the day first stop Skara Brae. It is a Neolithic village (stone age) dating from 2,500 BC which was discovered in the 1800’s. It was covered by sand for over 3,000 years until a large storm uncovered it. It has since had experts proposing different reasons why it was abandoned. It’s an amazing place with homes made from stone and still in fairly good repair despite missing roofs.

Meanwhile despite the cold weather a crazy Czech guy had gone swimming at the beach surprising a seal who popped its head up to try to work out what the huge pink thing with more hair on his back than on his head was.

We checked out Skaill House a large two storey house which belonged to the former owners of the site. There was an interesting old Orchadian chair with a high back which wrapped around the shoulders to prevent drafts ( great idea on Orkney).

Next stop was the Ring of Brogda, a Neolithic Henge and stone circle which originally had 60 standing stones but these days less than half remain. It’s the third largest in Britain and unlike Stonehenge with its fences and exorbitant prices this one is free and you can touch it. There’s theories that the ring was used for calculating seasons and when to plant crops but whatever the reason a lot of people 3,000 years ago quarried massive stones and arranged them in a large circle. There’s some other Neolithic sites nearby including the Comet Stone, The Stones of Stenness, Maeshowe chambered cairn and another cairn recently found in a farmers backyard so the area must have been of great importance 5,000 years ago.

The tour returned to Kirkwall where we had another look around and afternoon tea. Stuart told us a poem written by a sailor who’d been treated pretty poorly by the locals on a shore leave. He had sent it into the local paper as a jok and they printed it on the front page, apparently it had an impact and the locals were kinder afterwards.

On our way back to the ferry we stopped at the Italian Chapel. Built by the Italian POW’s during the war from items scrounged from all over. Filled with painted concrete it is a stunning work of art just amazing what can be done with scraps.

The trip back on the ferry was pretty rough but aft taking a few Kwell Michele nodded off, waking as we pulled into John o’ Groats. It was a great tour however next time we’ll ride the bike and spend more time there.

Tomorrow we head down the West Coast and start our journey to Lands End.