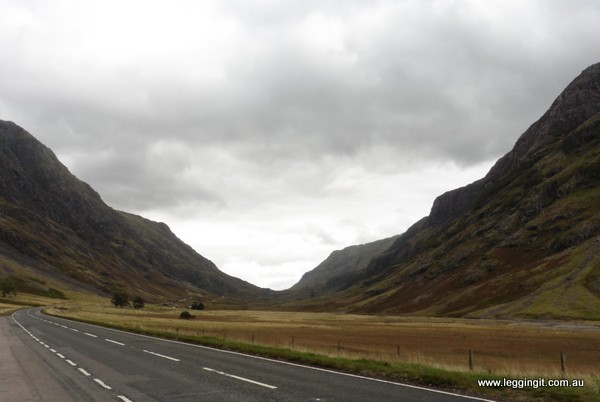 Today we took a trip down to Glencoe to visit the traditional home of the MacDonalds. It is about 20 miles south of Fort William and is a nice ride. Cruising along the shores of the Loch past Corran, where last time we caught the ferry to Ardgour, then over the bridge and along Loch Leven.

The Glencoe National Trust Visitor Centre is run by the National Trust and is well set up with lots of varied media exhibits. They traced the geological formation of the mountainous region surrounding Glencoe which is quite popular with hikers around the scenic valleys and mountaineers who take on some of the sheer cliff faces.

There is also historical displays for the region including the well documented Glencoe massacre. Thirty eight members of Clan MacDonald of Glencoe were killed by government troops who had accepted their hospitality, on the grounds that the MacDonalds had not been prompt in pledging allegiance to the new monarchs, William and Mary.

Following that another forty women and children died of exposure trying to escape through the snow after their homes were burned. Some of the troops disobeyed their orders and warned their hosts, while others broke their swords. As the troops were led by Captain Robert Campbell many people still say it’s part of the Campbell McDonald feud which has gone on for centuries, but Robert Campbell was smart enough to keep the written orders from his commanding officer Major Donaldson.

To keep the myth alive on top of the pass on the West Highland Way there’s a cairn of stones with a sign to place a stone if you’re against the Campbell’s or remove one if you’re not and the local pub has a sign out saying “NO HAWKERS, NO DOGS, NO CAMPBELLS”.

The ride up through Glencoe National Park is amazing with stunning mountains on both sides of the road, waterfalls, rivers and breathtaking scenery.

At Oinch we stopped at the village hall for the weekend market where local ladies were selling lots of handicrafts they’d made. It was so much like home with lots of knitted items, needlework, jams and cakes. We enjoyed some home made Leek and Potato Soup with a roll for £2 and took some Sticky Date Pudding home to share with our flat mates for dinner.

As the weather was starting to close in we headed back to the hostel spending the rest of the afternoon reading and playing cards.

After three nights here at Achintee  tomorrow we head off to the Lake District.