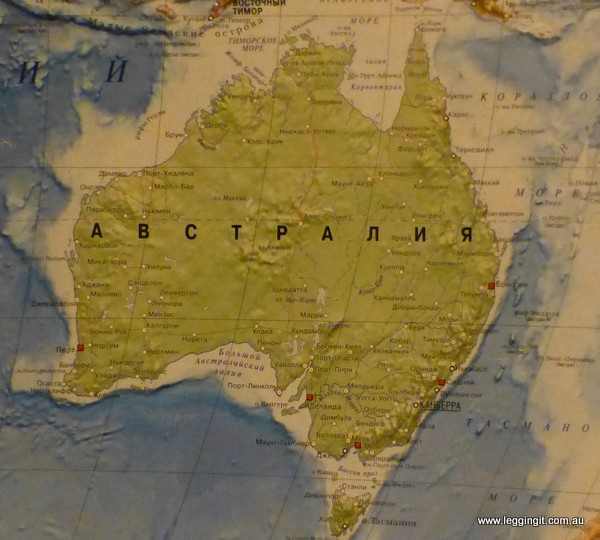 We awoke to our host tiptoeing into the flat with a breakfast tray filled with pastries, bread, cheese, ham and two thermos’s of coffee and hot water. She’d attached little notes to point out the coffee and water. Her plan was not to wake us and just set everything up, she is such a sweet girl. We chatted over breakfast and soon she departed for work, saying she’d see us tonight at the hostel.

Our host had booked us a few nights accommodation at a friend’s hostel.St Petersburg Hostel Club 33 (named after the region 33 where Vladimir city is situated where Sergey the owner is from) It’s quite popular with people from that city and there’s a real sense of community. After a slight deviation we met Sergey on street and he guided us inside the courtyard, down the alley painted with cats and up to the hostel.

The hostel was situated on the first floor and Sergey showed us around. Straight away we liked Sergey, he was just a nice bloke. We set our gear up in a double room and sat down in the lounge and had a chat. He spoke really good English and had opened the hostel about a year ago, he loved good music and hated Russian pop. It was obvious that he wasn’t some shonky hostel owner like some we’ve met and for me it was refreshing to see a hostel where everything wasn’t bodgied up. Working in the construction industry you soon develop an eye for workmanship and for me seeing poor or lazy craftsmanship is one of my pet hates. Unfortunately I can’t turn it off when I’m on holidays. Sergey had chosen the colour schemes and hired a professional painter. He’d then furnished the hostel with modern furniture, he had then decked out the rooms with different themes. He was working on a popular heroe’s room with pictures of icons such as Che Guevara, JFK, and music legends such as Bob Marley. I really liked what he was doing because the rooms felt bright and comfortable.

The Political History Museum was on our agenda we had tried earlier in the week to visit but it was closed. We were really looking forward to it but it turned out to be from start to finish a bit of a fizzer. When we arrived we approached the cashiers desk, paid for two tickets and were asked if we wanted an audio guide and were sent to the next desk. We had to wait for the English speaking assistant to return who explained to us that there was a deposit on the audio guides so we were sent back to the cashiers desk. It seems they wanted to set the “Cold War” beaurocracy tone.

The museum was split into two exhibitions with the one we wanted, which traced the rise and fall of communism split up on either side of the other exhibition. We dropped our coats in the cloakroom and headed to the beginning of our audio tour. This part of the museum was historic as the place where Lenin gave a speech from the balcony, and a few of his offices were kept in “original” condition. The audio guide in this area was useless as only one number had a story linked to it. There were handouts written in English but it was a “dogs breakfast” to try and read it. Although they were short on information there was no shortage of staff with a suited security assistant in every room, obviously they’ve had trouble with people stealing the English translations.

To continue the tour we were told at the front desk to return to the basement and make our way to the other end of the building which of course was the wrong end. The security assistant however showed us to the beginning of the audio tour and we continued. This part of the tour traced the Soviet Unions change under Stalin and his successors. It was a small area with lots of information but it was hard to listen to the audio guides as large school groups made their way through with their teacher explaining. There were a few rooms mocked up to represent the cramped living conditions under communism where whole families lived in one room flats. There were some interesting displays of personal stories of people sent to gulags and bits and pieces but overall the museum was pretty disappointing. It was poorly laid out and the audio guide at times was useless. With all the staff employed at this place someone should just walk through the museum and see if it is in order and makes sense.

We made our way home and were sitting at the table catching up on blogs when people started drifting in with different types of local cakes and sweets. Soon we were all chatting away and we discovered that they were all from Vladimir but had moved to St Petersburg. They quite regularly caught up for a meal, and Hostel Club 33 was a central part in their little community. Soon our host arrived with a bag of herrings and everyone got busy cutting up fish, and preparing the salad. We grabbed some drinks from the supermarket and soon we were feasting on raw salted herrings and onion, chopped pork fat (a Vladimir delicacy), boiled potatoes and salad. It was another truly Russian meal and despite it being not what we are used to it was a cracking good meal. As with tradition the meal completed with a cuppa tea.

After tea we said our goodbyes to our Couchsurfing host and thanked her for a great couple of days. We’ve been really blessed with the cross section of people we’ve met who represent “normal Russians” or whatever that means.