Today’s objective was visiting the Peter and Paul Fortress we wanted to check out the cathedral inside.e caught the metro to Gorvokovsky station and walked from there. The station looks like a flying saucer on the outside and we had visions of Jupiter 2 from “Lost in Space”. In the park surrounding the metro are a few sculptures and lots of trees so not a bad place to go for a walk. As most locals live in apartment blocks they bring their dogs here to crap. Picking up the crap and putting it in the bin is unheard of so sticking to the pathways was a great idea but we still had to watch our step. It’s been like that wherever we’ve been.

We had a wander around the park, they had this amazing area where they had all the buildings of St Petersburg in miniature and some interesting statues which were just waiting for us to have some fun with them 🙂 as you will see in the slide show below. 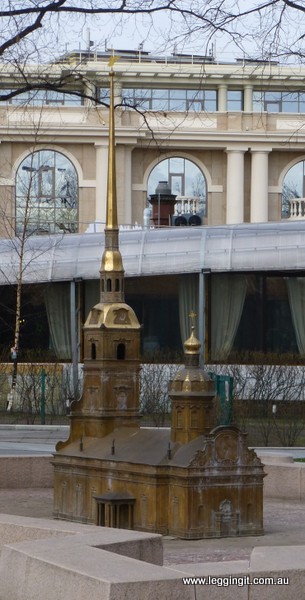 We spotted a little coffee shop under a small hill in the middle of the park called the Bolshe which looked pretty funky. It was set in the foundations of a former structure which the little hill covered so it was a bit like a hobbit house. There were a few tables inside and a few more outside and they played funky tunes through the speakers as old black and white films played on a little TV on one of the columns. We warmed up with a coffee before heading on to the museum.

The fortress was built on an island in the late 1700’s by Peter the Great and it’s quite a large structure. Surrounding the outside was a casement structure with sharp angles especially designed to inside the walls were beautifully restored buildings, offices, armouries, accommodation blocks, and the cathedral where the last Russian Royal family have been buried. 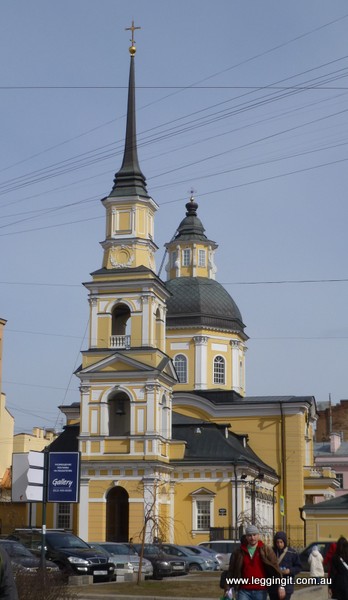 The weather was pretty chilly as we walked around the inside of the fort so we hurriedly snapped photos before returning to the Bolshe for lunch and to warm up. Along the river is the original wooden house that Peter the Great lived in for a while, just a common one storey bungalow although it seems to be now surrounded by brick for some reason. Not far from that the cruiser Aurora, it’s a 1900’s warship which fired the first shot although a blank one to signal the attack on Peter and Paul at the start of the Bolshevik revolution in 1917. These days it’s much quieter with the only shots being fired are camera shots from throngs of sightseers. 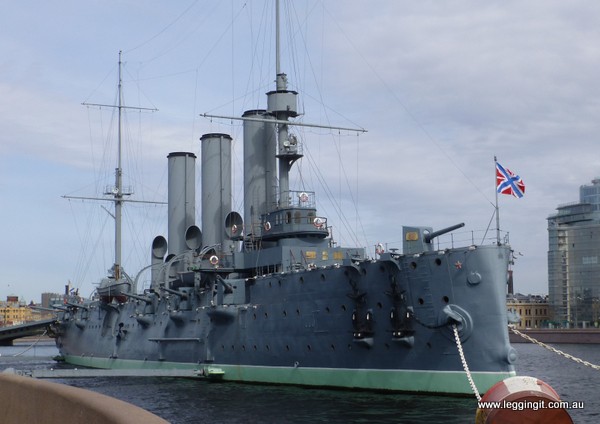 We crossed the bridge into the city walked through the Mars Field, and wandered around checking out different buildings before catching the metro back to meet our csing host.
The plan was to have dinner and then head out to a movie. She had read about this new café that had opened in a flat, we followed google, went through a metal gate, rang a buzzer and were let in. It seems very odd going into someone’s lounge and finding it all set up with tables. We enjoyed a Felafel and a cup of tea for dinner at the grand sum of about $5 Aus for the three of us.

We then walked through the back streets of St Petersburg to a hotel. They have regular screening of English movies that have not been dubbed as is normal in Russia. The movie was an Irish movie called Calvary, and it starred Brendon Gleeson and Chris O’Dowd. It was a black comedy about a local parish priest who is told in the confessional he is going to be executed and to get his affairs in order. As with black comedies some pretty gruesome issues were joked about. As there were only three native English speakers in the cinema there seemed to be a time lapse between when we laughed and when everyone else laughed. That by itself was funny. But it proved that although you may know and speak a language there are also cultural differences. Luckily for us our humour is similar to a lot of Irish and English humour.

It was interesting talking to our host and getting her view of the world, and finding out about daily life in Russia. One thing we’ve noticed is that many Russians are into western music and have distinct tastes in Rock and roll, jazz, blues. Good music it seems is universal.

Tomorrow we catch up with our Moscow Couch surfing friends.