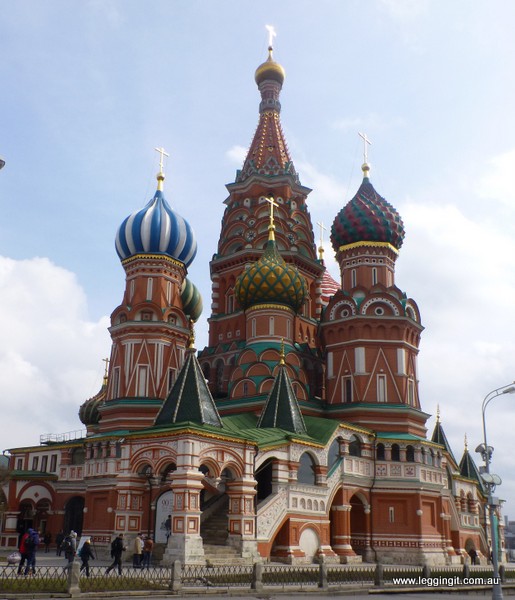 Early start this morning as we were caught up on the things we missed due to spending too much time at the Belarus embassy.  High on our list was Moscow’s famous St Basil’s Cathedral We caught the train to Okholny Ryad and walked the short distance to Red Square. Red Square is flanked on one side by Lenin’s Tomb behind it the high walls of the Kremlin and the GUM department store on the other. Yin and Yang on one side the symbol of Communism and the other consumerism.

Wandering over the cobblestone surface we thought back to pictures from the cold war of trucks hauling ICBM’s, Tanks, and war machinery rumbling across this very square. Grim faced soldiers goose stepping as millions of people across the world watched on in fear. These days Red Square is filled with lots of tourists taking happy snaps many probably not even aware of the fear this place generated.

Down the end of Red Square is St Basil’s Cathedral a combination of four churches under one roof. Despite what the guidebook said the museum was open and we purchased two tickets for 250 roubles each. The museum covers some of the bottom of the cathedral and the second floor. Entering the museum we were thinking this is gonna be crap but gladly we were wrong. The bottom level contained metal artefacts of worship, screens, altars, roofing tiles, silver helmets, coins, paintings, decorative silk tapestries, the displays explained in both English and Russian.

There was a small display about the man the cathedral was named after, Vasily. Vasily wandered the streets of Moscow sometimes clothed, sometimes not (as all of his icons show him without clothes) He was a Christ lover which in that time in Russia wasn’t so popular. The Christ Lovers were forthright and blatantly honest which meant they were often shunned by society. Vasily wasn’t scared of the Tsar even though it was Ivan the Terrible and told him honestly thathe would pay for his cruelty and murders. Despite this Vasily lived to an old age.

On the second floor the little churches were linked with tiny passages with small rooms leading off. In these small rooms different church screens were set up. They were mainly made of wood with icons of different saints, patriarchs and formerly stood at the front inside of churches. Some of the high ceilings above the screens were painted with bible scenes, saints, and apostles. In one small room a small choral group were singing hymns their deep bass tones resonating throughout the rooms. It was quite uplifting. In one room there was still damage caused by an artillery shell during the Bolshevik revolution.

After leaving the Cathedral we headed for the Moskva River intent on a little stroll. We noticed that the traffic in every direction on both sides of the river had been stopped, leaving the roads clear along the river to the corner of the Kremlin. Then a police car with blue lights flashing zoomed past, a policeman hanging out the window to tell a street sweeper to get off the road. Then a convoy of twenty odd police cars, vans, and black Mercedes escorting a stretched Mercedes limo zoomed past, blue lights flashing. Maybe Mr Putin was travelling by car instead of by helicopter. Meanwhile impatient drivers were blowing their horns almost like trumpeting his arrival. The convoy passed on to the Kremlin the lights changed and traffic returned to normal (if there’s such a thing in Moscow).

The one thing we noticed about Moscow drivers is how fast they travel. The speed limit is 60 kph but around the back streets or when there’s breaks in the traffic everyone just plants their foot. You really have to be aware. When it comes to parking there seems to be no rules for parking. If cars were too big to fit into a street side park they’d just poke one end up on the footpath and try and get the other end in far enough off the street. There’s a Metro station at the end of the street where we are staying, so cars would be parked on both sides of the road, along the median strip and around the roundabout leaving just a cars width for traffic to navigate through. Moscow park and ride.lol

Not far from the Kremlin is the cathedral. We had a look at the exterior the other day but we decided to return to check out the inside. The cathedral was pretty crowded inside with worshippers wandering about lighting candles and going about their prayer rituals. The inside of the cathedral was huge with massive marble covered pillars supporting the domed roof. The roof was painted with frescos and all around the walls were shrines to different saints with candle braziers. A church attendant went from brazier to brazier snuffing out the candles which had burnt down while another slowly circled the floor with a scraper on a long handle scraping up wax drips before mopping the floor. Along the front of the cathedral was a magnificent golden screen filled with icons and people gathered to pray. It was interesting just sitting back watching people as they went about their prayer. As we’ve transited through Asia we’ve been to all different churches, shrines, and temples. We’ve noticed that although the religions and beliefs are different there are similarities between the way people pray.
We stopped to discuss the building of the cathedral, it had been completed quite recently costing millions. It was a replacement for the one destroyed during the communist era. Many people were against the construction and some think that it is an ugly building. For us the building was magnificent inside and out. Maybe the opponents to the building thought that it was such a grandiose building that it went against some of their beliefs. Maybe they were just tightwads who didn’t want to spend the money. Either way as it’s situated in the nation’s capital it should have some sort of prestige about it.

We caught the train to Kitay Gorad and wandered the short distance to the embassy arriving just on 4pm. As we filed into the office Svetlana was laying down the law to all and sundry in Russian, just stamping her authority. We even got a special mention and smile which was a bit unsettling. Our Bengladeshi mate was back, although his visa wasn’t due until the 18th he unfortunately needed to get a copy of passport for some reason (we wished him luck with that getting it back off Svetlana)

Soon enough we were at the counter Svetlana was beaming “ah the Australians I’m sorry my Eenglish is not so good” Svetlana actually spoke pretty good English and pointed out to us that we needed to check the visa to ensure that all the details were correct. We thanked her, mainly for her change in demeanour and wished her a happy Dazvadanya. Yippee ……visas for Belarus. We celebrated with a coffee and updated our Facebook status.lol

The weather was pretty overcast but we headed back to Gorky Park to take a river cruise to kill some time as we were meeting up with a friend of a friend at 8pm. The river cruises from the park had all finished except the Raddisson one. The cruises from further up were still going and we contemplated going on one but the weather soon got worse and when it started spitting we decided to give it a miss. We tried to find some free WIFI to contact our friend and when we got the message that she was cancelling due to weather we were not at all sad. There’s always next time. We got back to the flat and packed our gear tomorrow we have to be up early to train it to St Petersburg.