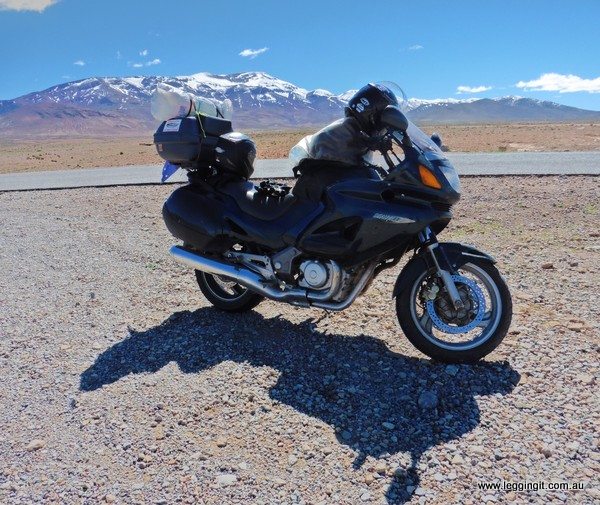 We started on our two day journey from Todra Gorge to Meknes with a planned overnight stop in Midelt. Midelt isn’t on the tourist circuit maybe an overnight stay on the way to Meknes or Ar Rachida. Midelt, is a mining area where mines have moved on and these days locals dig lead, copper, quartz, fossils and lots of different mineralised rocks from the area. A good day of digging lead will earn about 160 dirhams. The area around Midelt is popular with fossickers and rock hoppers but no one else.

It was one of the most beautiful days of perfect sunshine riding through lots of long sweeping plains green with all sorts of wildflowers happily being consumed by fat sheep and goats. Snow capped mountains towered over arid hills which ringed the long valleys. A brilliant azure blue lake that couldn’t be photoshopped. Arid dry country, crumbling mud Kasbah’s and oasis’ fringed with palm trees. It was a ride which wasn’t marked as one of the “must do” rides but it was pure food for the soul.

At a dusty little village about 70kms from Midelt at a rundown Petrom Service station we decided that we’d stop for lunch. Ron was regretting his decision because the place didn’t have menus, and that usually means “tourist prices” but a bloke who could speak English was sent for and soon he was telling us the prices which were really reasonable. Lamb and vegetable Tagine for two 60 Dirhams. Well the tagine arrived and this was a “mama’s home cooked special” Whoa it was soooo tasty. In fact the best we’ve tasted since we’ve been in Morocco. With gusto we hoed into it, but all too soon we were digging at the base of the tagine with our bread to get the last of the juices soaked up.

I was revelling in the wonderful riding conditions but Ron had a studious face and asking him why he wasn’t enjoying the ride his “mind was on bike repairs”.
A few days ago on our run up from Erfoud we’d noticed a oil burning smell coming from the bike. At every stop Ron did his usual checks and found nothing but when we reached Boumain Dades he found a few spots of oil. Ron looked everywhere but couldn’t find the source of the oil.

We arrived in Midelt for our overnight stop and next thing Ron was climbing under the bike outside the hotel armed with a water bottle filled with laundry powder, toothbrush, and a screwdriver, he cleaned the crankcase of the engine. He returned to the room and announced “Do you want the good news or the bad news?” The good news is “There’s no oil leak”, what he thought was oil was actually tar mixed with the desert sand which gave it the look of an oil leak. The bad news “The rear tyre is Kaput” When he was underneath the bike he discovered the tyre had shed some rubber and was down to the steel band. Without a replacement we weren’t going anywhere as the chance of a blowout was too great.

As our tyres were at the end of their life we emailed a company in Casablanca and organised for replacement tyres, brake check and engine service. However, our options were order a tyre be delivered to Midelt and wait until it arrives. Transport the bike to Casablanca or source a local replacement.

After speaking to the front desk at the hotel they pointed him in the direction of the road out of town where we noticed a tyre shop. Armed with the iPhone with the translator App (which I gave him a quick lesson on how to use) and wallet off he went. Arriving at the shop he discovered three tyre fitters who didn’t “parle Anglais” and try as he might the translate App didn’t “parle Anglais” either.
Luckily a Moroccan guy, Mohamed was walking past as Ron was swearing at the iPhone and offered to help. The tyre fitters explained that they fitted car and truck tyres only so pointed Ron in the direction of a little shop which was the number one motorbike tyre mechanic in town. With Mohamed pointing the way they headed off through back streets arriving at a little workshop where smaller capacity bikes were being worked on. The mechanic handed Mohamed his phone and rang another tyre fitter who had a tyre that may fit.

The other mechanic soon arrived by motorbike with the tyre over his shoulder. Ron wasn’t happy as it wasn’t a perfect match with the tyre wall size, and width was different. Also the tread pattern looked like it belonged on one of their farm trikes. However, the choice of tyres to be sourced locally was one…… this one. Midelt has only about five motorcycles with a capacity larger than 90 cc so there’s no market for tyres. This mechanic had been gifted the tyre by a Frenchman but for 400 dirhams would happily part with it, if it fitted.
Mohamed climbed on the back of the bike and with the tyre dangling from his hand directed Ron to another tyre shop to fit the tyre. When they arrived they were directed to another shop which had a pneumatic tyre press, so once again Mohamed armed with the tyre climbed on the back. Dodging through the late afternoon traffic they could have easily been mistaken for locals with Mohamed carrying the tyre, pointing left and right directing Ron down little streets to the final shop. 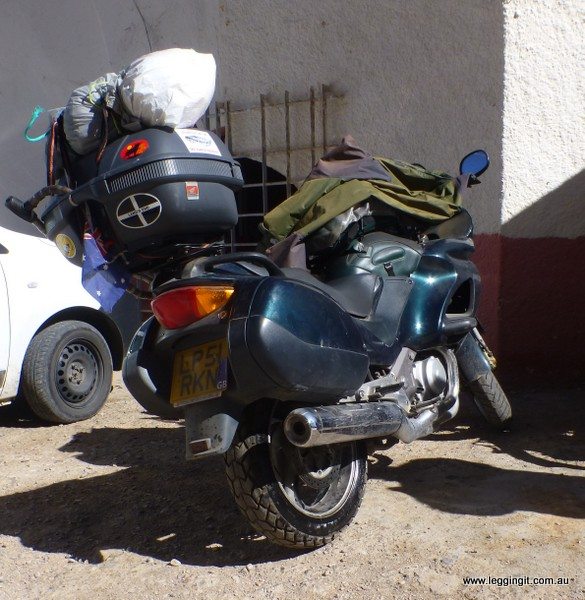 There were no bike lifts or fancy machinery. The bike was put on the centre stand and the axle removed on the dusty roadside. Then the bike was leant over onto the kickstand whilst the tyre was removed. The old tyre was put into the press, removed and the new tyre fitted to the rim. Pretty soon the process was reversed and the bike was ready for a test ride. After test riding, Ron was pretty surprised that fitting only cost 50 Dirhams.

After dropping Mohamed off with a small monetary gift for all his help Ron was surprised when Mohamed gave him a gift, a polished piece of local stone which he’d cut and polished. It was quite beautiful and reminds us of Ron’s Uncle Noel and Aunty Beryl who were avid rock hoppers, adorning their house with all sorts of wondrous rocks. 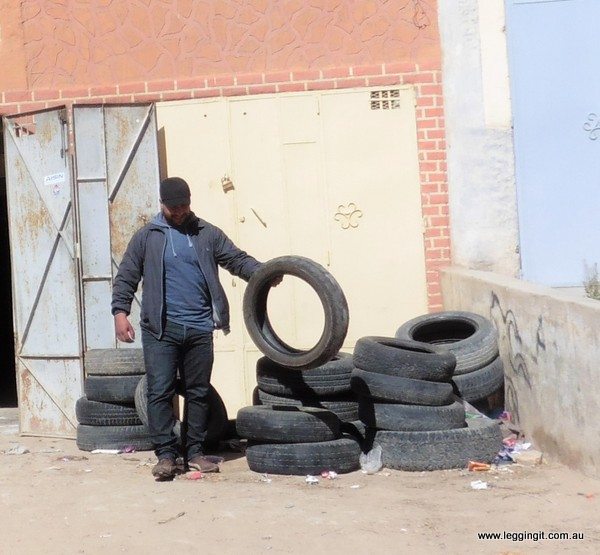 Tomorrow we test ride the tyre on our way to Meknes.