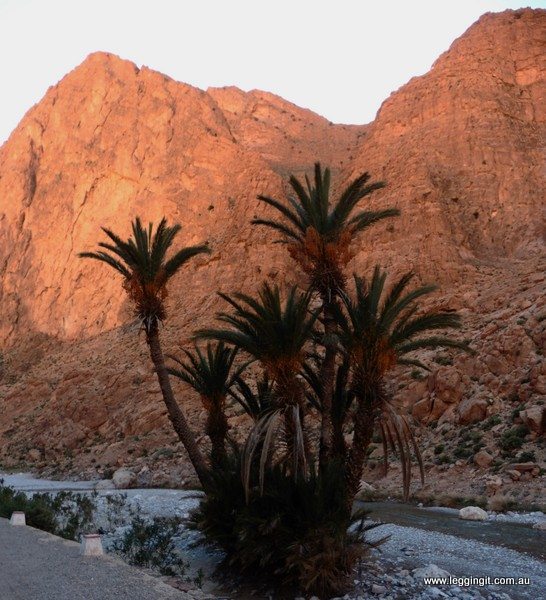 The ride from Erfoud to Boumain Dades is a quite interesting ride passing through all sorts of landscapes. Leaving Erfoud with it’s huge Kasbah style hotels, palm groves, and sandy soils the landscape suddenly turns into desert country. On the outskirts of the town fences lined with palm fronds keep the drifting sand at bay and it’s easy to see how much the area depends on water.

The desert gives way to arid country where locals seek their fortune underground. The area is rich in fossils such as nautilus and trilobites, the mine pits surrounded by spoil look like hundreds of mole hills. With each valley it seemed that the soil condition slowly improved. Desert, led to semi arid plains lined with stone and then onto stony plains absolutely covered in wildflowers. Green poker like flowers lined the fields in the more arid regions and golden canola in the less arid areas.

At a set of region gates we stopped to have a break and take some photos. Standing by the bike enjoying a box of dates we’d bought we noticed a man approaching with a donkey, with a baby donkey following behind. When the man arrived at the gates he loaded a few bags onto the donkey. Thinking that it would be a nice gesture to offer him some dates we held out the box.”Merci Monsieur, Merci Madame” he said as he happily took the box and walked off leading his donkey, leaving us looking at each other laughing like drains.

Arriving in the Dades Valley we rode through the area famous for its roses. Rose oil and products were for sale at every stall and each town had rose statues however we didn’t see a single rose bush. 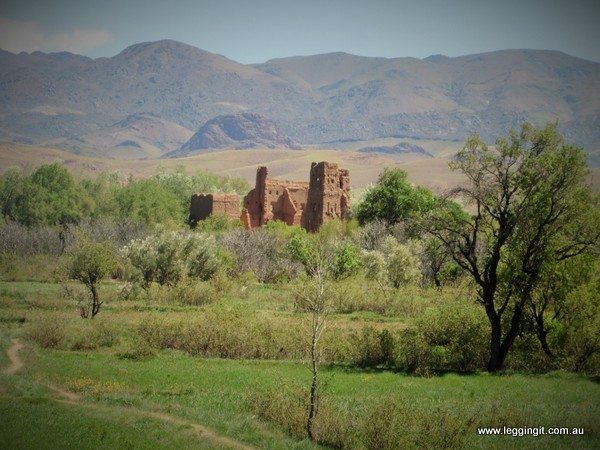 Once again google maps led us up the garden path with us spending about an hour trying to find our first accomodation including riding down tiny lanes onto agricultural tracks. Eventually we gave up and I quickly booked another hotel which was supposedly at the beginning of the road up to Dades Gorge. Arriving at the location on google and asking a local where the hotel was we quickly found that the hotel was in fact 25 kms away. We headed off up the road but as night was falling were still about five kms away. Aargh darkenss and windy roads are not my idea of fun.

So, we just picked a likely looking hotel and booked in. The hotel staff were friendly and after a meal of Chicken Tagine, the boys whipped out the drums, warmed them in front of the gas heater and started to play. The boys soon were banging the skins off the drums and singing happily away, it was good fun. A little guy dressed in a jebdella with crazy eyes behind a pair of glasses joined us and started paying a drum. He started off with a basic tune which soon picked up tempo, as he played his eyes rolled around his head and the faster he played his eyes became like a pair of pin balls rolling around a pin ball machine. It took all my strength to hold in the laughter just waiting to escape. It was a great night, however judging by the long face on the Korean guy also staying at the hotel, the drums were not to everybody’s taste. The next day well rested we packed the bike up and headed off to do the two gorges,

The ride up from Boumaine through Dades Gorge is quite amazing with little mud brick villages dotting the surrounding hillsides. Arriving at the gorge it’s actually small in comparison to Todra Gorge with the road melding to one lane between the river and overhanging cliff. The beauty of the ride however is the ride up over the mountain range on the way to Tilmi. Passing over the twisting roads, looking down at the river far below it’s hard to imagine the years that it took for the river to carve such an amazing landscape.

At the end of the sealed road it was time to see it all again from a different direction on our way to Todra Gorge. The attractive feature for motorcyclists of is of course the winding road up the pass, which is quite picturesque (from the top). We stopped at a café and enjoyed the view watching traffic winding it’s way along the amazing curves.

Todra Gorge is really impressive with its massive vertical cliffs and wide open space in the middle with the river running through. A few hotels, accessed by rickety wooden bridge, have built in the centre of the gorge with the towering cliffs menacing overhead, well actually it’s more than menace as one Hotel learnt as a massive boulder broke free from the wall above and crashed through the roof on one of its newer buildings. The lack of cleanup and rebuilding work suggests that boulders crashing through the roof may have been bad advertisement for a peaceful night’s sleep in the gorge. 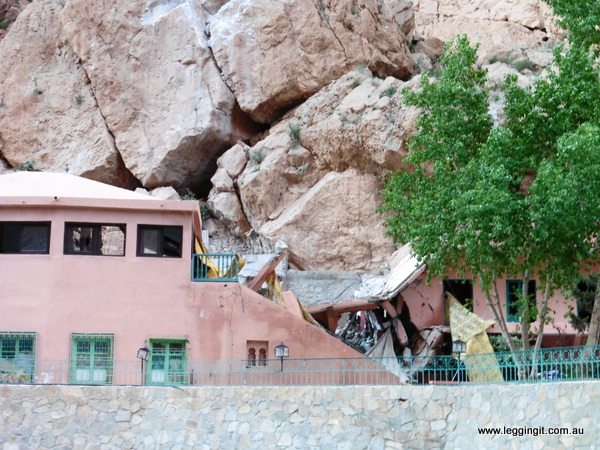 We intended to ride up through Todra Gorge to El-Ksiba but it meant crossing two rivers, and possible snow at the top of the mountain. At the first river crossing the rear of the bike sank into the pebble bed so I had to get off the bike. Ron rode across and waited on the other side but without stepping stones to cross the river I was outside my comfort zone, even the friendly local guy who tried to get me to follow him and tiny rocks that moved had no luck so…. Ron called “stumps” and we retraced our route to Todra Gorge where we decided to stay overnight.

The hotel was pitch black when we arrived with only the stairway lit with candles and as we set our luggage in our room we were handed a candle. The area gets electricity from a local generator which only operates for a few hours each night. All the locals rely on gas for cooking and candles for lighting, pretty rustic really. Tomorrow Midelt.
Please follow and like us: