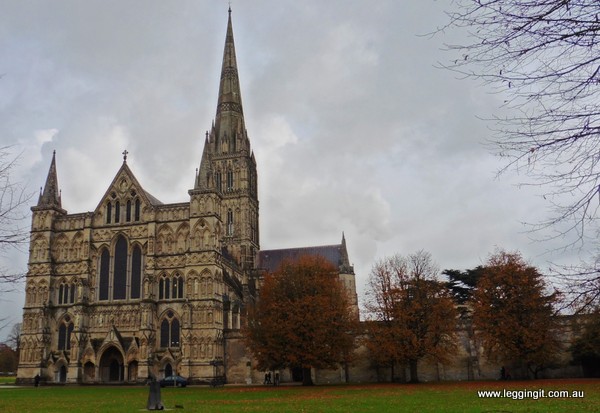 Today we leave Bournemouth and head back to London, stopping off at Salisbury Cathedral, the Magna Carta and Fovant Badges on the way.

The ride took us up through the New Forrest National park. “New”, well it was planted in 1079 by order of William the Conquerer to hunt in. The area is really picturesque with some quaint little villages, with lots of old houses many with thatched roofs.

We arrived at the Cathedral whilst a service was being conducted and its great to see this amazing structure is still in use. As we sat and drank coffee the sounds of the organ drifted through the building and it was obvious the organist was no slouch. The tune wasn’t a whimsical piece but almost a triumphal march.

Salisbury Cathedral is a stunningly beautiful building which dates from the 13th century and the highest spire in the UK. It’s set on a large grassed block ringed by trees which give it a special feel. Inside it has beautiful gothic ceilings and lots of light streaming in through its clear windows which add to the majesty of the Cathedral. The light interior also aids with the mixture of old and new items. The Cathedral boasts the oldest working clock in the world, which chimes on the hour, but it was designed without a face and hands so it looks more like a torture device.

The Cathedral also boasts a new funky font, it is about three metres square, in the shape of a cross, with a spout on each corner which allows the water to pour from it into the floor drains. The water surface tension creates a mirror effect of the ceiling. Around each side is a verse. Some people hate it because its new but we think its pretty funky and it fits with the Cathedral which has a mixture of old and new.

In the foreground of the cathedral is a statue representing a pilgrim in prayer, and over the entry door etched glass with and angel. Both quite modern in an ancient setting however they don’t look out of place.

In preparation for the 100 year anniversary of the beginning of the First World War local schools have a display of the names of soldiers killed. Throughout the UK there’s been lots of commemorations and displays in the lead up to Remembrance Day.

Also at Salisbury Cathedral is one of the four copies of the Magna Carta. Magna Carta is the charter which was issued by King John in June 1215 to prevent a civil war. King John was famous for being hated, unlike his brother the previous King, Richard the Lionheart. The Magna Carta is a legal document which guarantees certain rights. It has over 60 clauses, many of which are still in use today including the right to a fair trial.

Many copies were distributed to all parts of the kingdom and Salisbury Cathedral’s copy is one of four of the originals which survive. It was written in Latin shorthand, on vellum. It’s amazing that we lined up to look at a document written in tiny Latin letters which is unintelligible. However this 800 year old document has had an impact on all our lives through the years.

One of the things on our list around Salisbury was the Fovant Badges. They are regimental badges cut into a chalk hill, near Fovant. During the First World War soldiers stationed nearby waiting to go to France carved then into the hillside. There are eight currently visible from the viewpoint on the A30 some are original but others have been added over the years while others have been allowed to grow over.

To construct them the outlines were cut into the grassed hillsides, and then they were filled with chalk. The badges took fifty men about six months to complete and used about 50 tons of chalk. Quite amazing really.

The Australian Imperial Forces stationed nearby carved the rising sun badge of the Australian Commonwealth Military Forces into the hillside and is the biggest badge of all at 50 metres across. Although the badges are looked after by the Fovant Society it looks a bit tatty, actually the only reason we could recognise it was that we know what the rising sun badge looks like. It’s sad that the Australian Government haven’t stepped in and taken over responsibility for the upkeep as it’s a monument to a whole generation who never saw home again.

The badges flanking it are much clearer and it’s understandable that their upkeep is more important to the British, even though our soldiers answered the call from the other side of the world.

Leaving Fovant we headed back through Salisbury and headed north. The road took us out past Stonehenge. The traffic was a nightmare with traffic leaving Stonehenge adding to the holiday traffic. Stonehenge is visible from the A303 so everyone was slowing down to check it out. We made the choice not to go in and visit as it is very expensive and you do not get anywhere near the stones. After visiting some of the standing stones around the country we did not feel the need.

The run back to London up the motorway was pretty rough with Ron riding like he was being chased by the police. Next time I won’t tell him not to hang back in traffic.lol

Whilst back in London we’ll be able to service the bike and set up for our next trip.