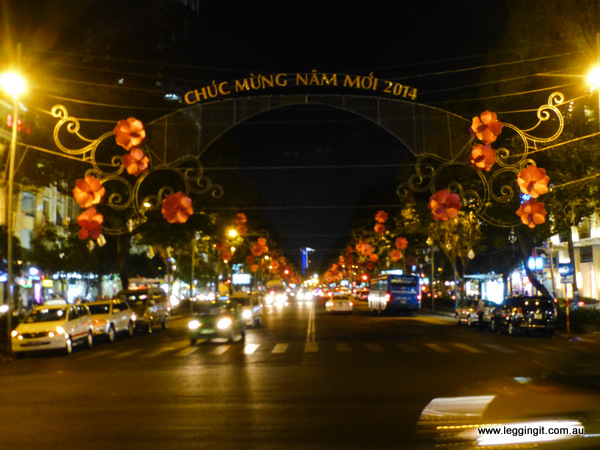 Waking up in clean sheets and aircon at the Long Guest House was really luxurious after waking up in a pool of sweat due to blackouts in Kep. Breakfast of Baguettes and Jam, for Michele and fried Noodles with Chicken for me. Bananas and Vietnamese Coffee finishing it off. Yummmy.

Armed with a map supplied by young Mrs Long we went off exploring the streets of Saigon. First stop shopping in a local supermarket and we were surprised at how cheap everything was. Michele’s eyes had been a bit gummy so we got some eye drops for only $2 at the pharmacy. We always use local pharmacies rather than carry around every kind of medication. They normally have all the medication you need for local problems.

Michele’s appetite was returning after feeling off colour for a while and we found a Greek Souvlaki Shop. Well actually the only Greek was on the menu, as the staff were all Vietnamese. We had a wonderful meal of chicken souvlaki, Greek salad, pita bread, tzatziki, chicken kebabs watching in awe as a local guy loaded up his parcel trike high with cupboards and furniture and then motored out into the crazy traffic.

One thing about Asia is the footpaths are usually impassable because everyone’s motorbikes are parked there. To get anywhere its never in a straight line, it’ s up and down off the kerb, along the edge of the road then back up. Another thing we’ve noticed in the two years since we were in HCMC is the taxi’s no longer dodge around you when you cross the road. Crossing the road through the crazy traffic, is pretty scary but here in HCMC just step off from the kerb (as you’ll be drawing a pension before there’s a break in traffic) you then continue at a steady pace and don’t stop the traffic will dodge around you. Now you have to watch the taxis a little closer because they won’t stop and will almost line you up. Michele’s theory is they want to make you scared so you take taxis everywhere lol.

We have been having heaps of trouble with our camera, with a mark appearing on all the shots, and the dust cover not retracting fully. We were seriously considering buying a new one and priced a replacement. We first went to a big place called Nguyen Kim that’d been suggested to us but the sales team were obviously not desperate for work, so we walked out again. Michele had read of a camera place on an expats site up on Nguyen Hue at Thuong Xa Tax building. I found the street easily enough but as we didn’t have the street number so wandered around looking for the building and eventually bought a simcard went on the net and googlemaps pointed us back in the direction we came, and moments later we found the building. Another check of the internet had us retracing our steps to the ground floor and wandering through all the jewellers to a line of camera shops to Kiet Camera. He looked at our camera and said $16 and it’ll be sorted out. Well compared to $300 for a replacement we had quoted across the road, we decided to let him check it out. It took longer than he said but it gave us a chance to gamble with our lives crossing the road to check out, the beautiful flowers in the park near the Ho Chi Minh statue opposite the Peoples Assembly building a beautiful old French build and also the riverside area with the huge floating restaurants, and lots of river traffic and enjoy a meal of Pho bo (Beef noodles soup, a favourite in Vietnam) and spring rolls.

The camera was in top condition when we picked it up and fingers crossed it’ll see us through this trip.
We wandered home enjoying the lights, before coming across dancers ballroom dancing in the rotundas in the park. The was flashing lights and music which changed with every dance. A mixture of old and new. There were a few people watching and it was pretty nice because there were some really good dancers. Michele started picking out people saying how they were like people out of the movie Strictly Ballroom and Shall We Dance? The next rotunda had the same thing going on and a sign said there was a dance comp coming up so obviously everyone was practicing for it.

Tomorrow we’re off for a city tour by motorbike.