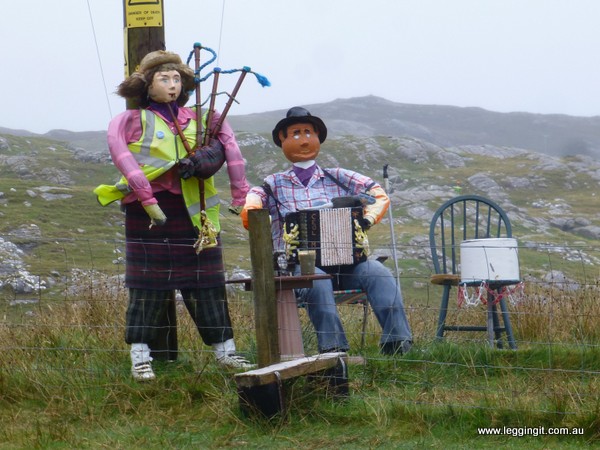 The weather didn’t look too bad so we decided to head south along the west coast towards Uig. Once again we spotted some Red Deer. They looked like they were playing tag on a little island in the middle of a small lake.

The countryside was pretty hard with lots of rock strewn hillsides or moorland. It must be hard areas to farm.

By the time we passed the Benbara turn off the weather was getting gloomier by the second. Then the sky’s opened up. As we arrived in Timsgearraidh we decided to pull the pin on sight seeing. So stopped at the Uig Community Store and warmed up with a coffee from a machine that you needed a rocket science degree to operate( which is not fun when yopu are cold and just want a hot drink)

We returned to the B&B as the weather was atrocious Michele decided to grab a book and sit by the heater. But I decided it was “not so bad” and put my wet weather gear on so I could look around some more standing stones. Today I checked out Callanish 2 & 3 which are smaller circles visible from the main stone circle of Callanish 1 and according to the experts used in conjunction. After looking at the other two structures the theories that they were used for Lunar and Solar observations makes lots of sense.

After a little Scottish weather it cleared and by lunch time a cracker of a day was to be had. I had a look around Stornaway checking out the war memorial, and the main area of the town before heading north to Tolsta. The farmland was less affected by the wind on this side of the island so there were lots of grasslands and fields. At the very end of the road I came to the “Bridge to Nowhere”.

The Isle of Lewis’ former owner Lord Leverhulme had grand plans for the island and amongst those plans was a road linking Tolsta and Ness. The bridge was built at North Tolsta but that’s as far as it got before he sold the island. These days the road ends at the bridge and a track leads along the cliffs and across the moors and eventually ends up in Ness. However, there’s signs warning people of the dangers of the walking trail.

Returning to Stornaway I took a ride out to Holm to pay my respects at the monument to the men who died on HMY Iolaire, January 1st 1919. At 2am on New Years morning the Iolaire struck a reef, the beasts of Holm, 20 yards from the shore and foundered. The yacht was carrying 284 Royal Navy Sailors returning home after the end of the first world war to Lewis and Harris. The weather was atrocious and the men were dressed in great coats so they never had a chance in the water. Of those onboard 205 died, 39 survived in the water but there was a story of great heroism where a sailor, John McLeod was able to get ashore with a rope and rescue the other 40 men. It was a tragedy that touched nearly every family on the island. Looking out over the harbour it’s still sad thinking that all these men made it through the war to be killed 20 yards from the island.

As the sun was starting to set I headed for the B&B to find Michele still in bed with her book.